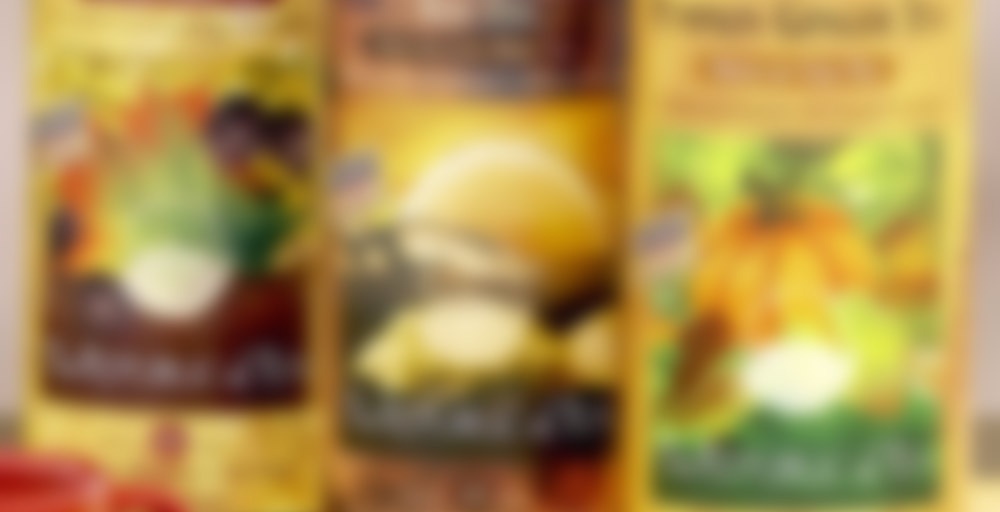 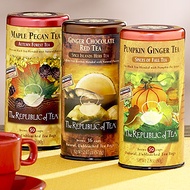 by The Republic of Tea
81
You

Wrap yourself this harvest season with a blend of fine black tea and warm pumpkin pie flavors. Spicy ginger, sweet cinnamon, cloves, allspics and nutmeg will take the edge off the chilly autumn air. Indulge in this limited edition tea with traditional fall desserts.

The Republic of Tea 73

Switching from Christmas back to fall. Absolutely love this stuff…definitely will be heading back to WM to try and get another tin before the fall season is over.

Hmmm… I’ve been wondering about this! I’m obsessed with anything pumpkin this time of year! :-)

I think it’s fantastic. Do you have a World Market anywhere close to you?

I wonder if they will carry these until Thanksgiving…or at least another week. I haven’t made the trek to mine yet. Bought from Harney, Teasource and Teavana instead…oops:P

I’ll probably be going back this weekend or next. Yeah, I’ve went way over budget on tea this past month. David’s, Octavia, Sanctuary T…and am now anxiously awaiting Frank’s new one to see how awesome it is.

@ Jaime – we have one across town, I may have to see if they still have it next weekend when I have time to head over there. Pumpkin + Ginger = win in my book! I was a little disappointed with a few of the WM holiday exclusives last year… So I’m glad to hear that this one is good.

Do they have any Christmasy exclusives? My first trip to WM was late January this year, so I missed all the holiday stuff. I want to make sure I don’t miss anything good!

Yes, I think that they usually do. We never had one in my town growing up, so it is always fun for me to go there! Lol. Last year they had Spiced Chocolate Mint and Dream By the Fire (a cinnamon vanilla rooibos blend). I was a little disappointed with those, unfortunately. :-/. But I am curious to see what they will have this year!

I’ve had Dream By the Fire…it was okay By the end of the tin I liked it, but don’t think I’d get it again. Spiced Chocolate Mint sounds fantastic!! Do they have different ones each year? That both excites and saddens me…because this pumpkin is too good to only be made one year.

I would be happy to send you some of the Spiced Chocolate Mint to try if you would like! That way you can decide if you want to buy the whole tin or not if they bring it back again this year. Just PM me and let me know! :-)

Why did I wait so long to taste this tea?! Maybe I was waiting for fall? Anyway, I got in a trade with QueenOfTarts almost a year ago.

This is great stuff! Much, much better than the Pumpkin Spice Adagio sells. The most prevalent spice in it seems to be cinnamon, as the ginger is more subtle. The pumpkin flavor is surprisingly realistic! Like pumpkin pie filling, especially with the touch of nutmeg. It really makes me think of Thanksgiving. Also, there’s a taste of caramel, to me at least, though it could be my imagination. I can’t really taste the actual tea in it, as it’s buried beneath layers of delicious spices. I’m going to have this as my breakfast tea until I run out.

I am also looking for pumpkin spice teas that are winners. Just added this to the shopping list.

This one might be kind of hard to find. Apparently it’s only sold seasonally at World Market. :/

Many thanks to Jaime for this tea!!!!

FINALLY a pumpkin tea that does not taste as if I am drinking a Yankee Candle. The spices (including the ginger) are subtle, authentic, and delicious, and I taste pumpkin. Actual! Pumpkin! The tea is second fiddle to all this, but I like it that way. It plays a good supporting role to the cozy, nostalgic, and sweet pumpkin and spices. A little sugar and a splash of milk make it the world’s best treat on a long holiday weekend.

Thank you once again Jaime!!! I don’t have a World Market near me, so you truly gave me a special experience :) :) :) I am looking forward to another huge mug of this from your generous sample :)

I’m so glad you liked it!

Thanks to tunes&tea for this generous sample!

I’ve been sick for the last 3 weeks, so all I’ve been drinking is Twinings Lemon & Ginger tea. I’m sick of it. So I dug through the awesome box that tunes&tea sent to me for something new. I figured this would be good, considering the ginger will help my cough.

I like this. I think I would like it more steeped in milk, chai style, but brewed straight up with some milk and sugar is really nice. Maybe my illness is stopping from catching the strength of the spices like other reviewers have noted, so I’ll have to try it when I’m feeling better. Luckily, I got lots of it so I’ll be able to enjoy this tea for a while.

I kind of detest ginger teas, so I went into this halfway expecting something entirely unpalatable, halfway not knowing what to expect. I’m a big black tea fan, love it dark and rich. I love/adore everything pumpkin, so there was a shot I’d like it.

This reminds me of pumpkin pie, in all the right ways. I wouldn’t say this tastes like a proper black tea per se, but great for a dessert tea. (Testament to the not-such-a-great-black-teaness, my boyfriend cares for this tea a great deal and seems to otherwise detest tea.) The only downside for me is – when it gets cooler the clove is more apparent. Otherwise, rock! I can totally enjoy pumpkin pie without fussing over baking.

I detest ginger teas too, so your review is appreciated! I will have to try this one now. :)

This tea is all ginger and no pumpkin. I’ve read the other reviews and just can’t figure out where the pumpkin is that they all mention. Admittedly, I like only a very moderate amount of ginger in my pumpkin pie so I might be biased. All in all, I’ve gotten used to this tea and drink it regularly (although more for the caffeine in the morning than for a pure love of the taste), and I think it’ll be a good based for a homemade pumpkin chai tea.

My sister, fellow tea lover that she is, served this after the Thanksgiving meal. It was warm and very tasty, I liked it a lot. A good accompaniment to Pumpkin Pie, to be sure.