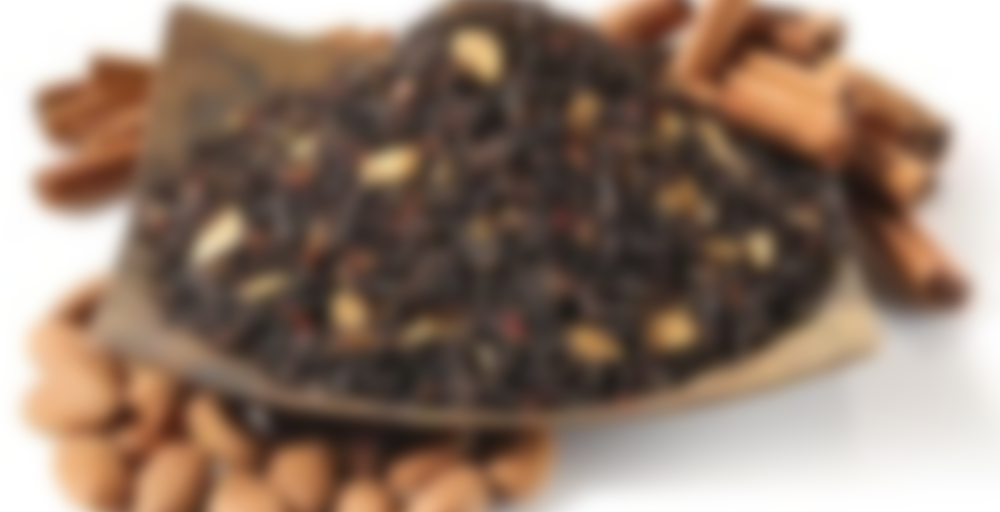 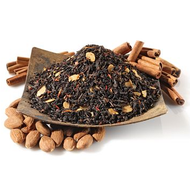 with 60 Ratings Rate this tea Rate This Tea

A black tea with the scrumptious “cookie-like” flavor of almonds and cinnamon bits, especially tempting sweetened with rock cane sugar and a splash of milk.

How to Prepare
Use 1 teaspoon of tea per 8oz of water. Heat water to 195-205 degrees and steep tea for 2-3 minutes. 2oz of tea equals 25-30 teaspoons.
Ingredients:
Black tea, almond pieces, cinnamon pieces, and safflower blossoms.

All right, last note of Geek Pride Day…gotta go out with a bang!

Encounter Powers:
Scalding Your Throat: If drunk prior to having used the At-Will Sitting There power for (insert heat resistance modifier) hours, Almond Biscotti will scald the throat.

Daily Powers:
Being Consumed: Once drunk, Almond Biscotti will Be Consumed.

Background: While seemingly carefree on the outside, Almond Biscotti is, in fact, haunted by…A MYSTERIOUS, TRAGIC PAST. Almond Biscotti is in fact the half-elf, half-unicorn, half-dragon, half-vampire, half-mermaid, half-ent (why not?) child of Gandalf and Anita Blake (that’s right, it’s three separate people!). Sent forward, or possibly back, in time, it has joined the X-men in the hopes of finding clues about it’s unknown parentage. It also went to Hogwarts when it was young, interspersed with trips to Narnia. Also, it’s an Aes Sedai. And a member of the Bene Gesserit. It’s SEEN THINGS you people wouldn’t believe! Worlds resting atop elephents themselves standing on a giant ass turtle! Travels through time and space in a police box! Really unpleasant lepers! Series that go on for way too long and I no longer remember what happened in them! And you just want to DRINK IT?

Well yes, because it is gosh darn tasty :D

And what a bang! I laughed, I cried! I couldn’t believe I even remembered what the Bene Gesserit is, it’s been so long since I read Dune. So, it sounds like this tea is all things to all people — and with a charisma score like that, I must try it.

I always try to keep this tea in constant supply at home. Yum!

I haven’t tried any of the other almond teas that are really popular here, so I have no basis of comparison, but yeah it’s really good.

Gotta try this one!

As I’ve rummaged through my tiny little tea drawer (that’s currently overflowing) lately I keep finding my tin of this that really only has a scant amount left in it. It’s SUPER old so every time I pull it out I have to think – should I throw it out?

It still smells so good, though! Even though smell and taste may not be the same, I went ahead and figured I’d make it today and if it tasted okay then I’d keep it, and if it didn’t – well, at least I’d know so it wouldn’t be staring me in the face EVERY TIME I reach for some tea to drink.

Also, decupboarding PROBABLY wouldn’t be a bad thing, considering I’ve got some Verdant on the way. (side note: should have ALREADY gotten here, stated as delievered yesterday by the USPS, but NOT in my mailbox and the apartment office isn’t open again til tomorrow. GRRR.)

I’m still amazed that this tastes really good! In fact, it’s almost like it’s gotten better with age. Definitely almond cookie, and even though I steeped it a while, with 1.5 tsp. leaf to 8 oz. water with a splash of milk, it is not astringent at all. Weird.

This is probably the last teavana tea I have in my cupboard, and since I’m not fond of going into their stores I wouldn’t buy it (or the newer iteration of it – I forget the name) again. But I have to say it has held up really well!

It’s a snow morning! This winter has been especially warm for whatever reason. This is my first cuppa of the day and I’m glad it’s black! For my Steepster friends: I started a new blog! It’s been pretty fun. :p (http://postscriptforfinales.tumblr.com) if anyone wants to read the ramblings of a crazy girl! :p
This tea is one of the best smelling teas in my collection. I think that one of the secrets to getting this cup right is the steep time. I enjoy this tea more at a shorter steep time.
The flavor of the tea has some very obvious cinnamon notes; but the reason they stand out is because it is warm without being spicy. As much as I love my chai-style teas strong this tea stands out by being more subdued.
The sad thing about this tea is it seems to no longer being stocked. It was replaced by the Amandine rose tea. I haven’t read any reviews on this new tea and I’ve been wondering how it compares to this one. I’ll have to ration mine!

Thank you for sharing your camp story. :))

Thank you a ton for taking the time to read it! :)

The yellow striped cardigan on your page makes me smile. I had one (pre-disaster) that was plain Crayola-box canary yellow that I saved specifically for gloomy days in February. Co-workers knew to steer clear when I wore it :) Here’s to anything that helps to un-gloomify!

Yes!!! I think that I really wanted something that wasn’t so..blue? I tend to wear blue/greens/black so it’s nice for a change! :p Here-here for being anti-gloomy!

Holy heck Steepster’s been erratic for me lately. Sometimes a page will load super quick, and sometimes it will take ages. Mostly just ages, though.

How about some sample stash busting, eh? It feels good to check this one off the list and out of the stash after quite a while. I brewed this one short and cool because I’ve had lingering bitterness problems with it before. The scent of it really does remind me more of snickerdoodles than almond anything.

Nope, still got that bitter taste to it. Bleh, not too sad to see this one go.

Steepster issues here too, for last 2 days. Not just you : )

HORRIBLE issues here today – right now its working so I am trying to get through my dashboard in light speed. Ugggg

I’m excited to compare this with Brioche in the near future. I really enjoy this blend from Teavana. Sweet almonds and a great black tea base. Love it with just a splash of cream. No longer needing sugar to get a sweetness out of it. Bumping up a few poins due to this.

I love this tea

Woo hoo pages are loading faster again!
Thank you Sandy Stith for this GENEROUS sample!
I really enjoyed this tea! Now its not as amazing as Joy’s Teaspoon Almond Cookie which is my top rated “tea” here but this one IS in fact a tea! Almond is such a hit and miss flavor but Teavana got this one right!
Its more affordable than Almond Cookie too.
Its sad but I don’t even have in my stash any of my top rated “tea” so its nice to have this – for now.
I actually tried to add some sugar to this about half way through the cup and I didn’t like it as much.
Better left alone.

My word Steepster is incredibly slow for me as well. I mean crawling snail-mail type. I am glad it’s not just me! waits five minutes for this to post

Things seem to be picking up now … fingers crossed it stays like this :)

I was tempted to buy this the other day but this Joy’s Teaspoon sounds mightily interesting. This site can be so evil sometimes. :)

The Joy’s is THE BOMB but bear in mind its a tisane – no tea involved but its like what more could I want late at night when the sweet cravings hit! Its beautiful!
Joy’s will have a sale coming up I think June 1st is what she said. I asked because I want this so bad but its kinda pricy!

Ah, it’s a lot like DT’s Forever Nuts? I had a tea like that from another company and I enjoyed it too. Very wholesome, yet bakery-like.

Hmmmm crazy day on the radio farm today. When we do a quarterly radiothon for a charitable organization…..that equals me running between studios like a headless turkey….oye! Pause. Brew. Share. Ok all is right with the world. As I am looking holy cow my bicentennial tasting note…woo hoo cue bells and whistles.

I was uber-excited to receive the swap package that Jessica had sent to me. I’d only requested one tea and wanted to be surprised by the rest. When I saw this particular tea this was my reaction:

Only I’m nowhere as awesome or talented as Simon Pegg. Why was I so excited? Well, it’s one of Ewa’s favorites and I’ve also never had a Teavana tea before. Double-curiosity killed two cats?

It’s really quite nummy! I’d probably rate it a lot higher and put it on my shopping list if I hadn’t had Leland Tea Co’s Bogart. This is like an almost-realized version of Bogart. This is still super-almondy-cinnamony-yummy, but without the snickerdoodle oomph. I’m thoroughly enjoying my first cup and can’t wait for the second. Ultimately it gets two thumbs up from me, but I won’t be purchasing more. Thank you so much Jessica for letting me try this! NE

ETA: bumped up the rating by 2 points due to super-yummy aftertaste.

Yep, same for me. Like Almond Biscotti only more? sounds YUM.

Bogart’s sooo yummy. I looked Bogart up again and was surprised to see that it’s hazelnuts and not almonds since I’m typically a bigger almond fan than hazelnut fan. Both are NOM! but yeah, I think that Bogart’s more aggressive with the nom-factor. :)

Had breakfast at Starbucks today with no. 1 on the way to kung fu. I had my usual, a spinach wrap, but as often happens when I’m in Starbucks I was really lusting after one of the pastries. I would much rather have had something with the almond paste-y flavor of a bear claw or an almond croissant this morning, but I behaved myself. For most of the day, though, I’ve been thinking about pastries and I wanted to have some Brioche. But I’m saving it for a special occasion, so I had this instead.

This will be the first in a short series of backlogs, I have been drinking tea, including new samples from Adagio and Ricky, but I cannot rate them on first taste.

I have been drinking a lot of tea in effort to reduce my cabinets, I have successfully cleaned out three of the large teavana tins, yay! Working on some more. See previous review for this tea, my rating has not changed.

I did however try this one hot with half and half, it made it creamier, a little thicker, but still delicious.