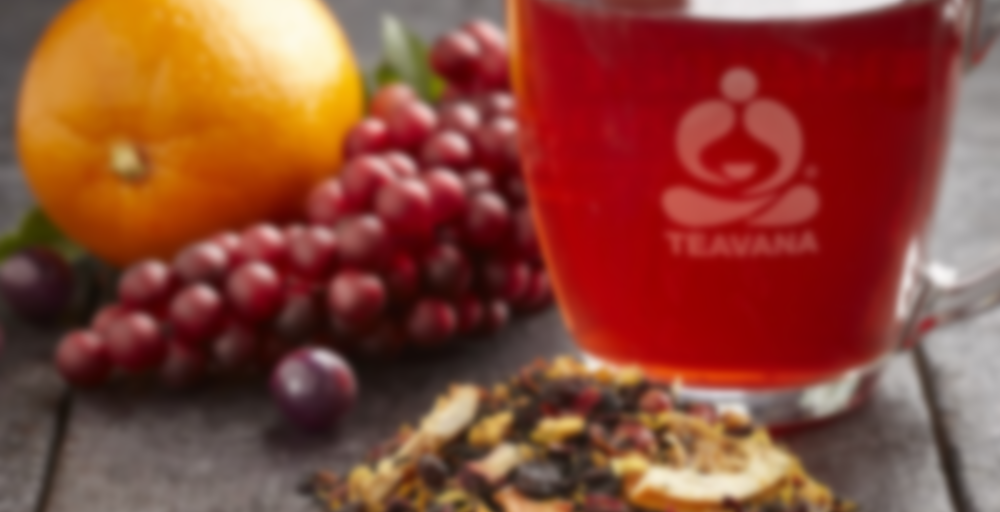 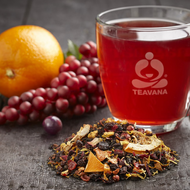 Colorful as a drive along the Mediterranean coast, this flavored black is deep, complex and full of personality. Red rich grapes, tangy orange slices, juicy peach and crisp apple spring to life with a hint of sweet cinnamon, creating a magical elixir certain to awaken your taste buds.

I made this this morning but got distracted when surprise maintenance came by! I had to hide my bird. Jeez. I had no idea they were coming. Anyway this wasn’t very good hot so it was good to let it cool off.

Again this is another one of those Teavana teas that smells amazing but just can’t translate into taste. I can’t remember now if I added sugar or not. I want to say I didn’t.

Hot, the full body in the description really showed itself. It was definitely like a heavy red wine, but it just wasn’t enjoyable. Also that might be weird for something that’s supposed to be champagne. The description talks up red wine but there’s nothing beyond a smell in here that really screams champagne. Just something about the sourness of grape and hibiscus did not match hot tea. So I let it cool off. I didn’t add ice, so I think I more or less had it at room temperature.

I have an idea though, maybe just a splash of carbonated water could make it better? I’ll have to try it fully iced that way.

LOL. I have to agree with your review, though I liked it a little bit more…but not enough to want to get it again.

I really liked this tea. The bf bought me some as a Christmas gift and, after tragically screwing up the first steep, I gave it another shot this morning. Aside from the fact that my taste buds are obviously on the fritz, I tasted cinnamon in it for some reason, it was a smooth, enjoyable tea. The taste is tart and heavily influenced by the grape components. I left it to steep for ages and that helped the flavour out a lot, also, it became more fruity and the flavours shone as it began to cool. This is not a tea I might have immediately picked out, but I am actually really impressed with it and I will enjoy the bag of it I have!

I wrote a tasting note last night that I deleted not for any reason but that I have a hugely different opinion this morning than I did last night. (Those vodka tonics mixed with nostalgia made me sentimental.) Anyway, I’ll rehash the story. I’m having a huge issue receiving packages at my apartment and I’m about to move. So I really shouldn’t order tea online right now until I settle into a new place.

So while I was in the mall replacing my broken glasses, I stopped into Teavana to try this blend. I had seen it online, and I thought it didn’t really sound like what I needed. It’s still definitely not what I want wanted, however it does have a pleasant citrus taste that almost satisfies me.

This tea is fruity, but it’s not too sweet by any means. I actually like the idea of the blend. However, the hibiscus doesn’t please me, as it covers the tea base, which is otherwise quite pleasant. There is definitely tea in this blend as well, which I really appreciate. I taste the citrus, which is mostly orange, but I do taste the lemon in this tea as well, so some of my needs were met.

There is a strange heavy aftertaste to this blend. I don’t know what this taste is, but it’s strange.

I also wish I had not started my morning with this tea. It just has an afternoon flavor profile.

I was going to rate this tea like a 65-70 rating. But then I tried to brew a second steeping. While I was stirring the sugar into the tea (I had been drinking it without sugar, but I wanted to try it both ways before I wrote a tasting note), I spilt the leaves. I was upset, because it meant I wouldn’t even be able to try to steep the leaves a third time. However, it’s not a problem, because my second pot of tea is really weak. I wouldn’t recommend brewing this tea a second time. This dropped my rating a great deal, as this is an expensive black tea (10$ for 2 ounces). I will not be buying this again, as not being able to get a second steeping is pretty much super disappointing for a tea at this price.

I’ll drink the rest of the 2 ounces I have, but I won’t be purchasing this again. It’s not bad by any means, in fact, I kind of like the taste, but the tea itself is just disappointing.

In fact, I dumped the rest of the pot. I figured life was too short to drink slightly fruit flavored water when I wanted tea. I brewed Teavana’s Golden Yunnan Pu-erh instead, and I can’t wait to have a cup of real tea.

This one doesn’t have too many comments but it was really lemony for me. Not too expensive either. I don’t have mine anymore or I could send you a sample, sorry. http://www.naturestealeaf.com/black-tea/lemon-black-tea.html

Oh wow, thank you! This tea looks perfect to me, and Yunnan blacks are my favorite consistently actually. I’ll definitely consider ordering it. (Actually, I probably will order it, but the timing will depend on whether or not I wait until I move after Christmas or not.) Thanks again.

I’ve gotten some of my favourite Yunnan blacks from Teavivre but they’re not exactly on the cheapest side of life. Ships from China.

Just woke up about a half hour ago, after chatting with my Dad for a few minutes, I went to go make tea…he asked if I could wait because he already had the coffee pot going, (Which I felt momentarily annoyed, I mean he usually gets up earlier then me and preps/sets the automatic timer to turn the fricking thing on at 9:30…but I got over it soon after he said that since my kettle and his coffee machine are on the same circuit, we shouldn’t risk popping a breaker. Meh.)
Anyways, got this tea on Thursday when I was running my errands at Whole Foods and Kroger, (There is a Teavana about a mile from WF, so I often combine trips.)

Smell: fruity, heavy.
1st taste: heavy, complex. a bit tart, (in a good way.) It’s so far interesting, but not sure I’d go back to get it. Lately Teavana’s prices have been getting to me, I mean if I get enough saved up, I will be getting a small apartment, otherwise will be moving in with my mom, but either way, won’t be able to spend much on tea at all, let alone at Teavana so will undoubtedly be making the decision to mostly stay away from Teavana unless for special occasions like the Heavenly sale or my Birthday. And I mean truly special occasions, not rationalizations;)

Anyways, this is an interesting tea, it would probably make a decent iced tea, (Most fruity ones do.) And also, it leaves a heavy taste in the mouth as a aftertaste. If you don’t like that…don’t drink this.
This does have an unusual temp and steep time recommendation: 195 and 3 min. I only did 190 because of my kettle and I didn’t think about using my thermometer.

A delicious fruity champagne that will tantalize your senses in dry form and when brewed. The combination of ingredients equal a sweet yet tangy pink elixir that is very fragrant indeed. I picked this one up today, looking to round out my collection of champagne and wine teas and I was pleasantly happy with this one. Because of that perfume more than anything else!

In my “Summer Valentine’s Week” mindset it just fit well with the music choices of the night and the lovely backdrop of a summer sunset. I do really recommend this tea for fruity tea lovers as the black tea notes are not as apparent as one would think. I believe it is there most likely to round out all the other flavors. Cheers and hope you get a chance to try this tea with your loved ones.

I remember getting this tea and it smelt lovely, however when I went to try it at home I was thoroughly disappointed. It taste like hot fruit punch—YUCK. There is too much artificial flavouring in it and I’m not a big fan, however it actually makes a lovely ice tea! I wouldn’t recommend it as a hot tea, but I can deal with it iced. I won’t be buying this again.

I was inthe Mall of America Teavana store and thought this sounded interesting, so I asked to smell the tea. The aroma was great as was the descriptive name. However, when brewed it tasted heavy like a sweeter red wine. I guess that’s where the “Sangria” part of the name comes from. There were citrus notes too, but I didn’t detect anything that could lend itself to the “Champagne” part of the name. You cannot re-brew these leaves, the tea is astonishingly weak when you do. And when I took a good look at the tea I discovered there really wasn’t very much black tea in it.

I have to differ from the directions that you put in 1 tsp of tea per cup. With a tea mug that is only 8-10 ounces, I need to put in 2 tsp for black or a plain green tea but 3 for some of the fruit-laden teas. I was told by a sales person at the MOA store that they recommend 2 tsp for a smaller tea mug. That makes this tea more expensive than what the flavor is worth. I won’t buy this again.

I’m pretty sure Champagne Sangria Punch is one of Teavana’s new releases. It has an intriguingly complicated name featuring 3 different types of beverages in one name. So this gives me high expectations for this tea.

Well, let’s put it this way, it’s nothing like any tea I’ve tasted before. It has a citrusy-minty taste. The tartness gives the tea a remarkably similar taste to sangria or wine; something of that sort. And that’s really all there is to say. I think with that alone, you can easily imagine what it tastes like.

Overall, I think it makes a great iced tea, and you can even add a bit of sugar or sweetener if you like, it still tastes great either way :)