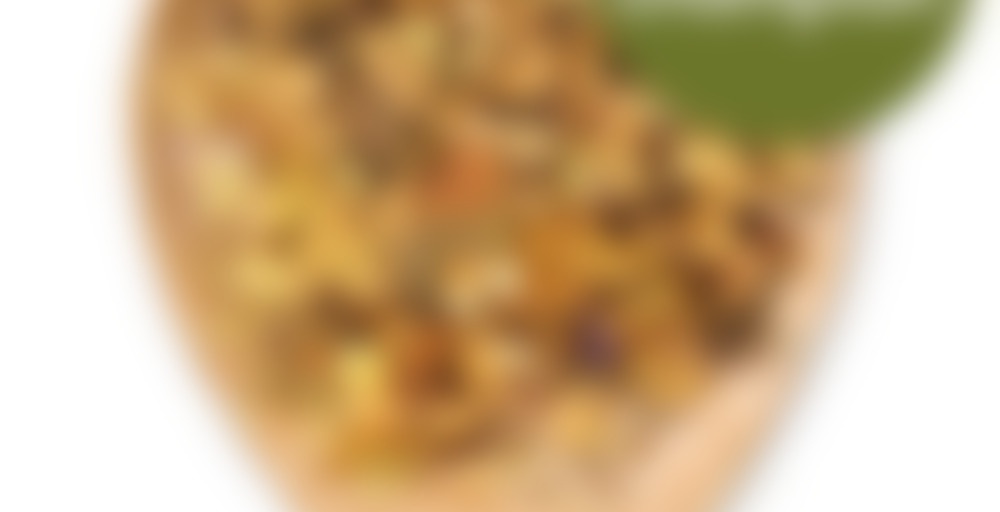 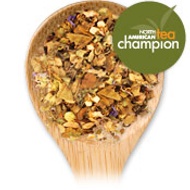 Rarest Pai Mu Tan white tea is plucked in early spring from a special varietal tea bush called “chaicha”. Blended with the sweet taste of juicy orchard fresh pear and the tingle of spicy ginger for a delicate and delighting infusion.

For some reason, this bag is really strong on the ginger today. I’m undecided on how I feel about this.

Taste is VERY surprising yet JUST what I wanted out of it! You would have to like Pear to enjoy this. It’s primarily pear with ginger helping it out JUST enough!

As it cools I can taste a little bit of blackberry and the after taste is a sugary-floral linger.

This is MAYBE my favorite from TeaForte SO FAR!!!!

I think that’s the highest rating I’ve ever seen on a Tea Forte. Sounds yummy!

Backlog: I chose this tea to enjoy with my dinner this evening. It came from their “organics” line, and it was in a classic tea bag rather than the signature Tea Forte pyramid sachet. I have to admit that I found myself preferring the classic tea bag over the pyramid, if for no other reason than the fact that the foil pouch kept the tea tasting fresher than the origami-like folded cardstock packaging for the pyramid.

This is one of my favorites from Tea Forte. The pear is light, the ginger is peppery and it was a pleasing accompaniment to my meal.

sipdown! this was from a sampler a while back and i finally got round to trying this last one. Sadly i was hoping for more from these little packages. I think i’m better off sticking to tea that isn’t “designed for cold brewing”. Oh well, it was a great intro to some of tea fortes teas. This one is white and ginger…but not really pear. Instead there’s a weird taste to it that i’m not a fan of.

These are “designed for cold brewing”? As in, plunking them in the fridge with cold water? Huh. I’ll have to try that.

i mispoke.. i meant they’re designed to be iced teas… you still boil water, steep and then pour over ice or whatever.

When my friend and I went to Venice for the final, flickering moments of the Biennale, I picked up some sample tea bags from Tea Forte that were on sale while she was shopping for gifts. That’s how it always goes – I accompany someone as they shop. They buy gifts for others. I buy gifts for ME.

Anyway, I’d been curious to try out TF, and I’d only seen them in hideously overprized huge tins before, so I snagged what looked interesting. One of the bags was this one. I’ve been a little too excited to catch up with my untried teas lately, and the amounts of black tea I’ve had late at night has resulted in the following type of sleeping pattern:

So I figured white was the way to go today. This bag, helpfully, even has ‘Very little caffeine!’ printed on it. As for the tea itself, well.

Sniffing the bag didn’t get my hopes up – it smelled very strongly of artificial ginger. The description clearly says PEAR, with a note of ginger – ginger as the dominant feature in a tea isn’t really for me, unless it’s very well-balanced, like Kusmi’s lemon/ginger which I quite enjoy.

In the cup, the ginger definitely mellows, and the flavour is predominantly pear. However, it’s a really artificial pear experience, much reminiscent of my fave Swedish ice pop, Piggelin.

Just… warm. And with ginger. Urrrhh.

Then there’s this other note, both in the scent and taste of the steeped tea, that I absolutely cannot place. It’s just weird, like drinking something that came out of a 3D printer. It’s so very clearly the scent/taste of an object not made for drinking and it’s really confusing.

I will finish the cup, but I never need to drink this again.

(ETA: I’m liking this a little better as it cools, so I’ll kick the rating up a little, but just a very little.)

I thought this one was not too bad as an iced tea. I never had it hot.

If I hadn’t already had far much better pear tea, I know I would have been more impressed. I guess I can’t help comparing the pear flavouring to that of Le Palais des Thés’ green pear tea, which I love.

I left this to cold steep in the fridge for over an entire day so I’m expecting this to be heavy on the ginger.

And it is! I actually like the ginger aspect of it. It’s like fresh ginger root, and/or non-alcoholic ginger beer without the carbonation.

The pear is a little wonky for me, on the artificial side, but perhaps leaving it to steep that long might have done that. I kept meaning to try this a little earlier but yesterday’s rain, and this cold basement, made me slack in that department and reach for hot tea instead.

At the beginning of every sip, right before the ginger takes over, I’m also hit with something leafy that reminds me of raspberry leaf. I looked it up and lo and behold, it’s blackberry leaves. Close enough!

Many thanks to OMGsrsly for this iced tea sample!

I haven’t tried cold-brewing this one yet. Definitely need to give that a go. I hot-brewed it and diluted it to 1.5 litres (6 cups), then chilled overnight.

In the mood for a little more tea today! I thought this flavored white would be a nice afternoonish cup. Thanks AGAIN Jaime!)

The pear is lovely, and the white tea is quite nice! I’m not getting ginger, but rather black pepper, which is a little disconcerting paired with the pear. Not entirely unpleasant, but it’s “harshing my mellow” as the kids say. ;) I like it enough to not only finish my cup, but also do a resteep, but I don’t think I’ll run out and buy this particular tea. I would totally try another white tea from Tea Forte, or really any Tea Forte, because I like the tea base and the pear. It’s just the black pepper I mean ginger that I’d stay away from!

Here is my Analysis:

tea: I must have REALLY been craving a cup of tea but I projected this desire onto my husband.

mall: ANXIETY! I hate the mall! I think the mall stands for my final project that I am having terrible anxiety about.

cold: this is literal. It’s so cold here and I think I was cold in my sleep! I woke up and all the covers were sort of bunched up around my dog and not on me!!!

so early: It was 4am-ish and I kinda knew that even whilst sleeping ;)

This is one that varied by the bag for me…some bags were absolutely perfect, others a bit too ginger/peppery. I’ve decupboarded it now…I don’t think I’ll be picking it up again unless it’s on a really good sale!

This was part of Tea Forte’s Nantucket iced tea sampler that I bought. Dry it smells of sweet ginger. I brewed it as per instructions, 24 oz boiling water, steep for 5 minutes, add sugar, chill, add ice.

The brewed hot tea tastes strongly of spicey ginger. There is a very faint sweet fruity taste. It was good enough that I wanted to drink it hot. After it was chilled it was sweet ginger with a more fruity taste. Juice-like. I would not say pear per say, maybe peach, just generic fruity. Still good. I don’t really distinguish the white tea other than that the tea is not very strong. I added some sweetener and on my, there is the pear. It is definitely more like sweet candied pear. I like that with the sweetener there is more pear taste, but I think I preferred it without the sweetener, as now it is too much candy taste. There was only one of each flavour in the box which is too bad because I would have liked to have more of this one.

I iced up my last two triangles of this today. It’s not bad. More pear than ginger, and what with not being a fan of the ripe pear taste, I’m not sure why I thought I liked this so much.

It’s pretty good, especially if you like very flavoured teas, and you find it on sale at Chapters. :) 1 triangle does about 1 litre of final iced tea product to my taste, they say it makes 24oz. But drink what you prefer.

Hm. Maybe I should give this another chance.

All I taste is pear. It’s not super sweet but definitely reminds me of those terrible jelly beans. (Terrible because yuck! Pear!)

I reread my tasting note, and felt… no. Will not give second chance. HORRORFUL.

No matter how hard I try, my cupboard always seems to be at 180 teas. *Sigh. Well, all I can do is carry on! This tea is juicy and delicious! It has very little ginger. The aroma is candied pears, but the flavor is more natural pear with a touch of lemon. I think if it had a tiny bit more ginger, it would be much improved.

The ginger is coming out more at the end of the sip now that I’m halfway through the cup. But the predominant flavor is juicy, sweet pear. Like those Dole cups of diced pears in natural juices. No sugar added. ;) I can understand how this won an award. The flavors are delicately balanced. This is super yummy!