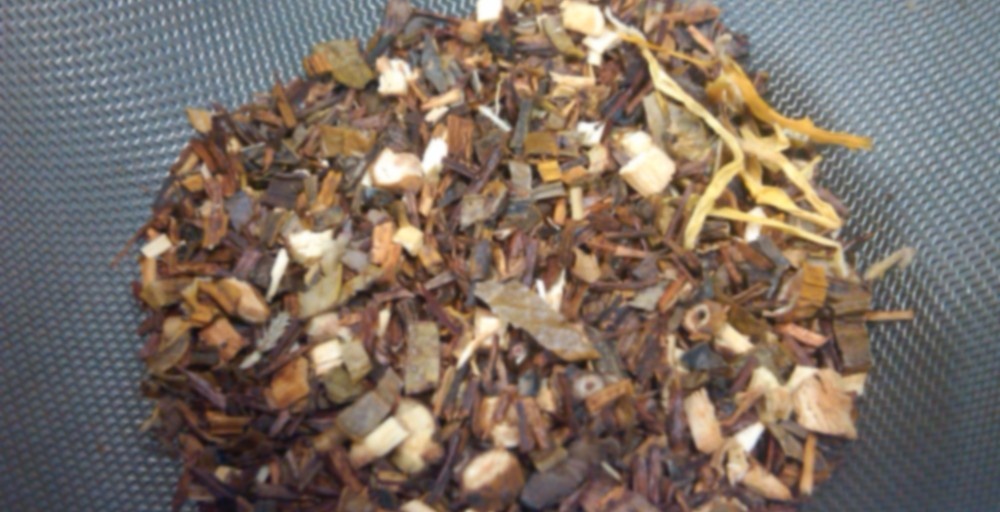 Tea Forté Apricot Tea is a mellowing blend of Organic South African honeybush and Organic rooibos (ROY-boss), known as “red bush”. Both honeybush and rooibos are considered to be wonder herbs for their abundance of health promoting polyphenols and flavonoids which may help protect the body from free-radicals that weaken natural defenses. Enjoy our Apricot Tea with a sunny sweet taste and double delight of just picked apricots and juicy peach with the unique nuanced notes of organic marigold flowers and the enticing flavor of just toasted almond, artfully evoking Saronno, Italy the birthplace of amaretto.

Honeybush is rich in antioxidants that boost the body’s immune system and help slow the ageing process.
STEEPING INSTRUCTIONS

For loose leaf iced teas, use 3 tsp per 8oz glass and double the steep time.

Dude. When I had this tea way long ago, I used to hate it. Like it was just so weird? But I definitely got used to it :) Happy rid this tea from my shelf. I grew to like it, but I don’t think I’ll restock.

I’m really enjoying this one…both hot and cold…I think the new Herbal Retreat offerings are more up my alley than most of their others! At least the offerings without Hibiscus that is. This is WYSIWYG…Apricot and Amaretto sums it up nicely! I’m appreciating the Honeybush/Rooibos blends very much – thanks Tea Forte!

Wish I had the creativity to sit around and think, “Ooh! What would you happen if you combined ___ and ___?” … and it came out right. This sounds great.

JennyFur sent me a sample of this and it is delicious! Apricot and amaretto are pretty spot on making for a sweet nighttime treat. Thank you JennyFur for sharing with me!

Glad you enjoyed it! Tea forte was a hit or miss order for me and this one was one that I enjoyed. If you want any more, please let me know because I have most of my bag left. With everything else I have I’m afraid its been bumped to the bottom of the pile.

I have been finding I either quite like them or really do not enjoy them at all. Unfortunately there has been a few more misses than hits for me but this one was very nice. Thank you for sharing.

Backlogging… Apricot Amaretto is my last blend from Tea Forte’s Herbal Retreat sampler packet to review. I’ve said it before, but I’m a huge foodie and I applaud Tea Forte for going the cocktail route with their tea blends. I really dig the concept.

Unfortunately, I didn’t much dig Apricot Amaretto. I like amaretto in general. In fact, my drink of choice in college was an amaretto sour served in a red plastic cup. Classy! I also really enjoy all things apricot, so theoretically this tea should be the perfect fit for me. Nope. The almond flavor tastes off to me, and that “off” flavor quashes any lovey apricot flavor that may be lurking in the blend. Its just not the right tea for me.

I wouldn’t buy this tea, but I am looking forward to trying some of Tea Forte’s other blends that sound pretty fantastic. I’ve seen some very highly rated dessert blends from this company that really intrigue me. We shall meet again under better circumstances Tea Forte!

That was the same conclusion I came to. I wouldn’t buy the teas in the sampler particularly, but I’m much more willing to buy from tea forte now.

Exactly! TeaEqualsBliss has reviewed some Tea Forte flavors that intrigue me. In my opinion, incredibly brave and generous for a tea company to send out as many samples as Tea Forte did.

I agree! My local Chapters is stocked with Tea Forte products and I’m definitely going to try some different flavours, if not get these ones again. No free sample is a bad free sample in that sense n_-

Not bad, not bad at all. The dry tea smells like almond liqueur (ie. amaretto) with a touch of fruityness, though the fruityness seemed to disppeared when the water got added.

It was a bit heavy on the red rooibos when I firsh tried it, but after it had a chance to cool a bit the honeybush took over quite nicely. The almond flavour is very much there, though thankfully, unlike some, Tea Forte’s blend doesn’t taste like someone dumped a whole bottle of almond extract in it. I do wish there was more emphasis on the apricot flavour though, because I’m not really tasting it. I get the sweetness of the honeybush but nothing I can really liken to any sort of fruit. Still I think overall this tea is more ‘hit’ than ‘miss’.

Darn. Don’t taste sweet, apricot, or amaretto. What I taste it metallic, on the sides of my tongue. I’m pretty sure I followed the preparation recommendations. Now I’m wondering whether that’s the “off” almond flavor I’m getting.

It smells fruity. Going to wait and let it cool down a bit more. Maybe I’ll be able to raise my rating.

A little later: Nope. Mostly tastes like hot water now. At least the metallic taste is gone. Dumped in another bag and left it. Will update again shortly.

A little later still. Nope. I can taste the almond a bit — it doesn’t taste sweet like amaretto. I can’t taste anything else.

The box is very well constructed and nicely decorated.

Tea Forte’s flavors always sound so good but it seems like for the most part they’re kind of a bust.

Yeah, I kind of got that idea after scanning some of the “popular” listings for them. It’s interesting that the ratings on this one are so all over the place. I’m back to my Earl Grey binge again — nothing new, just enjoying what I have.

Lots of dust, weird smell. I’ve gotta say, I’m feeling uneasy about this. I had been drinking these in the order of what I expected to like (least to most). Maybe I was wrong. Dry, I get an odd smell, almost alcoholic or possibly even like hand sanitizer. I can smell something definitely amaretto-esque, but not in any sort of pleasant way. I forget how much I hate amaretto…There is no discernible apricot smell, it is all booze. I’m worried.

The rooibos/honeybush are very fine, almost pulverized, though this might have been a fault of their travels to get to me. It’s definitely some of the finest (read: dusty and falling through my filter) I’ve had. Steeped, it smells a little less boozy, but I must say that they have accurately captured the amaretto scent. Still no apricot though.

First sips are fairly accurate to the smell. There is a tinge of medicinal/alochol based flavour at the end of the sip that I’m not too wild about, but otherwise the taste is fairly unassuming. As I said before, they’ve captured the amaretto flavour well, but there is still no apricot to be found anywhere. Since I quite like apricots and don’t like amaretto, I was hoping it would be the reverse.

I’m going to rate this at 70 for amaretto accuracy, but still factor in my concerns about the aftertaste and lack of apricot. I’m quite pleased to have the flavour profile as strong as the smell, that’s rare in Tea Forte teas I have tried in the past. Once again, I can drink this but I wouldn’t buy it. I would consider gifting it though…

This is my fourth sample from the herbal retreat collection, and so far, it’s my favorite. (I still have the blueberry one left to try) A good balance of flavor between the rooibos and honeybush. A pleasant apricot flavor with a hint of almond. Sweet and tasty.

I was a bit apprehensive about this one because I was afraid it would be TOO mixed drink like – but it is actually pretty good. The apricot tastes fresh and juicy with the amaretto adding an interesting, sweet note. Pretty good!

Scent from a distance is very cough-syrupy, but when you get your nose down into the dry leaves the amaretto scent is a delicious single scent.

The steeped scent has amaretto sweetness and a bitter tone of perhaps apricot pit and alcohol mixed. It smells like a mixed drink.

There isn’t a lot of taste on the tongue itself. You get a smooth or buttery consistency on the inside of the lips and the middle of the tongue. There is a flash of the bitter+amarretto flavor/scent in the nose as you swallow. The tisane feels full in the mouth.

Im not familiar with honeybush and not huge on tisanes, but must say that if you are into either this is worth trying. This does give the feel of the name in its taste.