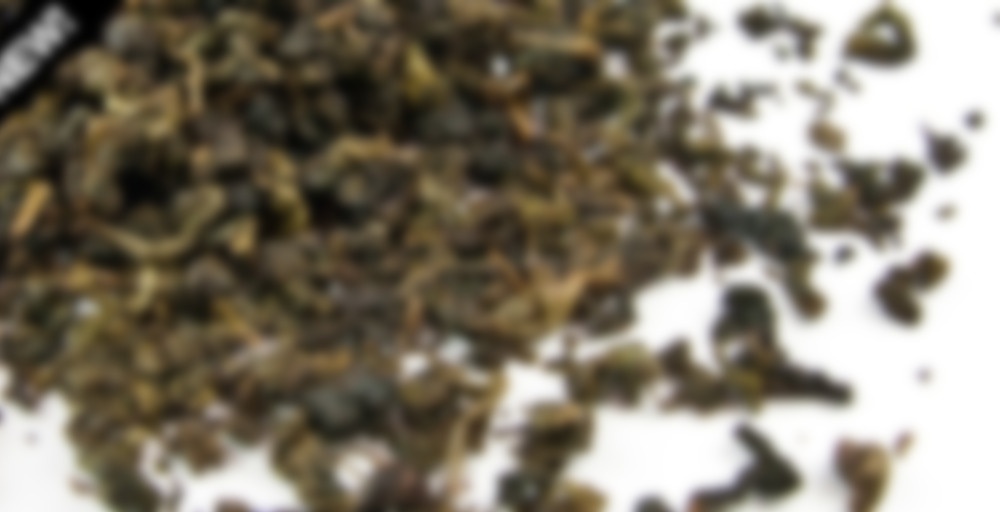 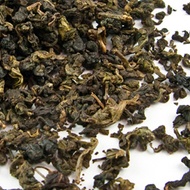 Silky smooth and voluptuously velvety, this debonair drop has all the smooth buttery goodness of an oolong base with a slick creamy aftertaste. Daring yet sublime, the sweet sensation of milk blankets the mouth and elicits the cry of ‘moo-long’!

another tea from Alice and i’m glad our sentiments are of the same mind. I am not overly a fan of green oolongs, but i continue to try them to see if there are any that will change my mind. I have tried a large number of milky oolongs, with Mandala being one of my favourites.
This though? it’s different from most milky oolongs. Alice’s notes indicate that it’s flavoured so I’m going to hazard a guess that’s why. all milky oolongs i’ve had previously were unflavoured. over all this isn’t bad, but there’s a little too much in the way of “green oolong” and not enough delicious creamy milky oolong for me to really get behind it. I’ll likely have another cup of this and share the rest with one of the tea girls who prefers green teas :)

I quite like green oolongs too but this really wasn’t my cup of tea. Apparently it is one of T2’s most popular oolongs which I find kind of surprising.

I am now in Melbourne! The first thing I did here was, of course, checking out the T2 shop nearby! I bought a box of Melbourne Breakfast and wanted to purchase a pack of Milky Oolong as well. I could not make up my mind because I was dying to try milk oolong but T2’s milky oolong is pretty expensive. In the end, I asked the cute guy at the counter if I could try the tea. I thought he would give me a small sample to taste right away but instead he gave me a generously-sized sample to take home! I was pleasantly surprised indeed!

Ok long story short… so how was my first encounter with milk oolong? I don’t know how much this tea tastes like the “typical” milk oolong, but anyway I enjoyed it. :) It’s amazing that a tea can be light yet milky at the same time! It’s not really very milky (the ignorant me was actually expecting a “cloudy” tea but it was nothing like that), yet the creaminess and softness unique to this tea was unmissable. I love the slightly sweet, milk-tea like aftertaste! The weather is crummy today but this tea has brightened the day :)

I think I am going to buy it this Sunday!

I just tried my first milk oolong not too long ago, it was so interesting how it was clear yet milky creamy; you do expect a cloudiness. If I didn’t look at it while I was drinking it, I’d swear I was drinking a tea latte.

Yup isn’t that fascinating? I look forward to trying the milk oolong of other brands!

I’ve been interested in trying a milk oolong for a while. My understanding is that the famed milk oolong is made only from a particular cultivar of tea and the milky/creamy flavour comes from the leaves. On closer inspection milk oolong this is not. Well maybe it is made from the milk oolong cultivar, I have no way of knowing but I do know it is a flavoured Oolong, the ingredients on the package make that clear enough. Flavoured with what though? I assume (happy to be proven wrong) that it is artificial flavouring as T2 will generally list the names of natural flavourings on their packages rather than use a vague term like “flavour”…

The taste? I can taste oolong in the background and some kind of sweet caramel flavour which is quite strong. It is nice enough but I can’t help but think that a darker oolong would bring more richness to whatever the added flavour is. A nice departure from caramel/vanilla flavoured black teas that are everywhere but the caramel/vanilla taste left in the mouth is exactly the same as these inexpensive flavoured black teas. I think most people would enjoy this tea even if they don’t like oolong but at the same time much better quality oolongs can be had for the same price or less. I guess I’m a little bitter because I think the naming of this tea is a bit deceptive, perhaps Creamy Oolong would have been better…

My thoughts entirely Alice! A ‘real’ Milky Oolong is hard to find (and T2 certainly doesn’t deliver the goods). At least, however, they are honest enough to list ‘flavoring’ on the ingredients, unlike many Chinese producers/distributors. You could try the Jin Xuan (pinyin for Milk Oolong) from Tea & Sympathy: http://teaandsympathy.com.au/collections/oolong-teas/products/jin-xuan-milk-oolong I wouldn’t say it is THE most delicious Milk Oolong I have ever tried (but then again I can’t even be sure that the ones that have topped it most in China were free from additives themselves), but it is pretty ‘true to type’ with a few interesting characteristics of it’s own. Not cheap mind you… I’ll post a review soon.

Just uploaded my notes for the Tea & Sympathy version :)
http://steepster.com/teas/tea-and-sympathy/40302-jin-xuan-milk-oolong?post=194173

Thanks for the links TheSurfinSipper. I just bought a bunch of new teas but will add jin xuan from tea and sympathy to my wish list :)

No problemo, I’ll let you know if I come across any other good ones in the meantime. A good jin xuan is a tea worth getting to know!

I noticed teavivre have two, one flavoured and one unflavoured at good prices but I’ve never purchased from them before. They seem to have good review on here though.

I’m in a pickle at the moment. I moved to perth and didn’t bring much tea, not realising how long postage to Perth takes so now I have a large amount to tea in the post but absolutely none on my shelf. It is so tempting to order more but once it arrives I’ll have too much haha.

Too much tea? No such thing! Welcome to Perth btw!

This is a truly beautiful Oolong – it tastes creamy and indulgent while being very light. The aroma reminds me of a light caramel and is very strong – you will find it will make your whole room smell of caramel which I love. The tea itself is closer to black than green, there is no hint to ‘gassiness’ whatsoever and has a satisfyingly medium strength flavour to it. It will provide you with a nice milky/ caramel aftertaste.

Great before bed, very calming and relaxing like velvet caramel in a cup. Makes for a beautiful desert tea without being overpowering.

You can re-use the leaves up to three times by increasing the brewing time by a minute teach time. By the third re-use you’ll find the beautiful aroma has faded but the taste is still divine.

Delicious. Not exactly what i would call the most affordable tea by T2, But it definitely is good. This is one of my favourite oolongs by T2 (Oolong berry is my absolute favourite tea from T2). This tea is very light (in terms of the oolong) and has a very subtle creaminess to it. usually i like my creamy teas to be super creamy, but this its delicious even though the creaminess is definitely understated.

If this was a real, unflavoured milk oolong I would probably be blown away by it’s richness and marvel at the buttery toffee notes. But it isn’t. And as such I find myself somewhat put off – nay, offended – by the intensity of flavour! Flavour which is a pretty poor approximation of real Milk Oolong.

Spraying ‘milk oolong’ with artificial flavour is a pretty common practice in China where cheap oolongs are boosted to make them appear like their rich buttery milk oolong counterparts, but T2? Really? I’m disappointed. For those not concerned with flavouring though I will stop ranting and proceed with the tasting notes:

Aroma: Distinct and unsubtle with big whacks of toffee, honey, buttery shortbread and some nuttiness. All enviable characteristics in a (supposed) milk oolong, but somehow this tea misses the target and instead delivers its own distinct flavour profile that some may love (and clearly do) and others (myself) may be put off by.

Flavour: Similar to the aroma, with a rich aftertaste and big creamy mouthfeel. Whilst there are aspects of the taste I find appealing the I still can’t help but be put off by the overall effect. This is a tea for those who love big brash flavour.

Overall: Probably not a bad place to start for those who are new to green tea (or like flavoured teas). As for me, I’m wondering how I will get through the rest of my box…

I went into T2 the other day with my mother (who went TEA CRAZY) and the lovely sales dude encouraged us to try this one. Seriously, he was mad about it! He wasn’t wrong either, and I was very happy that he gave us a little pouch to cart home to try. I must admit I haven’t ventured into oolong territory much before, but I will definitely be going back after trying this one! I seem to have a preference for smooth, creamy tea and this fits the bill. Beautiful.

I LOVE LOVE this tea! It’s been my go-to tea for the last 2 weeks. I love that the tea leaves unfurl into big leaves as they steep, you really don’t need to add much tea to get a full and rich brew. Because the leaves are big, I don’t put them in a strainer, I just add them straight into the cup and as they steep, they sink to the bottom. It’s delicious, it’s sweet and creamy, it’s so easy to brew, and it’s healthy – perfect everyday tea for me. I knocked a few points off just because “flavour” is listed as one of the ingredients, although the T2 assistant said it is vegan and doesn’t add any calories to the tea. It’s my first milky oolong, so I am yet to compare to other revered milky oolongs out there. But for an introduction into oolong tea, it’s beautiful! Also, you can resteep this 2-3 times and it will still taste awesome/leave no bitterness.