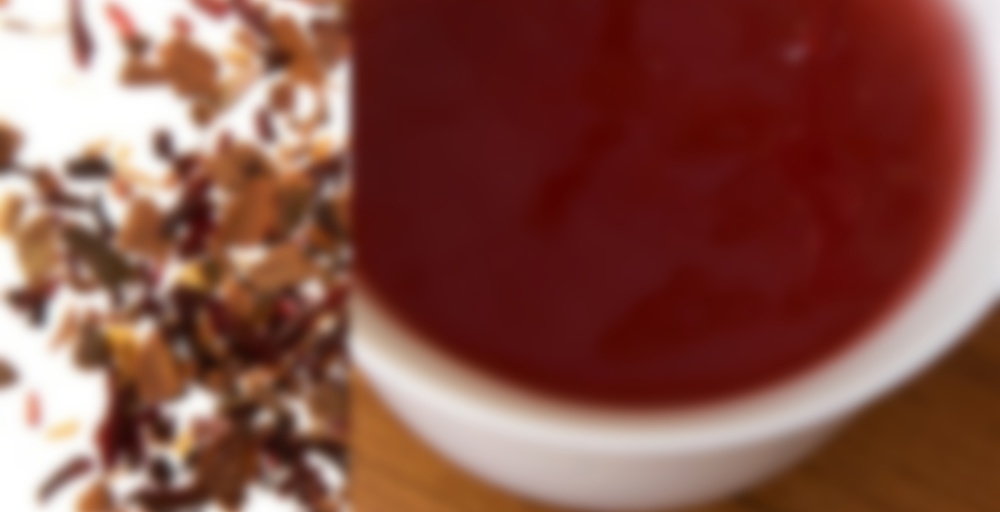 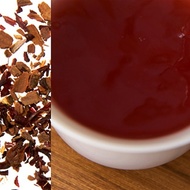 Flavor Profile: A touch of woody sweetness, the bright tartness of red plum and nuances of cranberries and currants with a tart-spice finish.

Tea Story: Organic cinnamon, hibiscus, currants and licorice are blended with natural plum essence for a complex yet gutsy, caffeine-free drink reminiscent of Gluhwein, a spiced, warm German red wine with apple cider. Notes of cinnamon stick, cinnamon-laden, stewed McIntosh apple and hibiscus are in the nose and the aftertaste. Shake gently before each brewing for a balanced infusion.

This tea is interesting.

And I don’t mean interesting as in that thing you say when you don’t know what to say. I mean interesting as in it is full and varied and complex and it made my brain go to several different places all at once. I knew I wasn’t going to be logging this when I drank it, so I was typing down some words when I did, and every single time that I did something – smelled it, sipped it, swished it, whatever, I found something different.

I was flooded with flavors and smells and texture and memories and wow. This tea was bombarding me with so many things that I could barely keep up. And at the same time I was trying to think, and to place things I wasn’t recognizing instantaneously. It was overwhelming, yet invigorating.

So I’m going to try and piece this together, but forgive me if it comes out a little disjointed, because to me this is like launching someone up into the middle of the sky during the fireworks, bringing them back down, and then asking, “So, what was it like?”

First, this tea is strong. For what it’s worth, I put about a teaspoon and a half in ten ounces of water. This was also my very first experience with it, so I’ll probably try a shorter steep time just to see if that has any effect, though this level of flavor met me well.

There were only two components of this tea that did not strongly remind me of summer – the cinnamon and the tail of the sip that made me think of unsweetened cranberry juice. [Yes, this tea contains hibiscus. And yes, it is bold at the finish. If you can’t handle it I don’t recommend this tea, but you should be aware that this tea holds so much more than hibiscus.] As for the rest of it…

The dry leaf reminds me of peaches or apricots – ripe and juicy and slurpy – and they’re accompanied by cinnamon. Wet, the leaf takes on a bunch of different tones. Sometimes it smelled to me like fruit punch. Then it was potpourri [but not in a bad way]. Then [and it took me a bit of thought to place this] it smelled distinctly like popsicles. You know, the fruit flavored ones that come in the white paper packaging. It had that muted fruitiness, accompanied by that dryness from the ice.

And then, perhaps strangely, I smelled chlorine. I swam competitively for a pretty long time, so chlorine, though really relatively the same from pool to pool, has different connotations to me; different smells. This was summer chlorine; the smell that rises off the soaked concrete of the pool deck as the sun beats down relentlessly. We would slink out of the water, exhausted after a particularly difficult practice and lie, half-heartedly stretching to try and quell the lactic acid that would shortly turn us into human noodles. That strange, unexpected yet familiar chlorine smell was also present in the liquid, but it came and went, dodging between the scent of peach pie sprinkled with cinnamon.

I wasn’t sure what I was going to get from this exactly, so I tentatively took a quick sip. I didn’t let it sit in my mouth for very long, and just swallowed it and I quickly realized this was not going to be enough time to get anything out of it except the resulting tartness. On the next sip, I held it in my mouth and let it roam around a bit. The hibiscus taste was there, but along with it was apple – not particularly sweet, but tart apple, and something else that I couldn’t place. I gulped that sip down [the cranberry taste, as I discovered, was more apparent to me if i swallowed quickly, the hibiscus aspect clearer if I let it make it’s way down more slowly] and took another sip in.

This time, I held the tea at the front of my mouth, just tasting it with the tip of my tongue. Here, I could definitely taste the cinnamon. That was very apparent. But there was something else swirling around with it that I couldn’t quite figure out until it side-swiped my brain.

It was so clearly plum. I don’t know how to break it down anymore than that, I can just say that once I recognized it I nearly face-palmed.

The rest of my cup was spent holding the tea at the tip of my tongue and then pounding it down when I was ready to swallow. I seriously enjoyed that plum cinnamon-y taste, and found the cranberry tartness at the finishing strangely refreshing. I was slightly, slightly disappointed that there weren’t really any peach or apricot flavors to be found, though honestly I think that the rest of the tea was so intense I think it would have been completely drowned out.

I’m wondering if a shorter infusion will dial everything down enough to bring out more flavors, or if it will simply make for a softer cup of tea. Anyhow, this made for a really neat experience. I got a bit more complexity out of the aroma than I did the actual taste of the tea, but that plum cinnamon combination was delightful. I’ll also have to try this iced when the weather turns warmer. Anyhow, right now I’m not thinking that this is going to be a re-order for me. It’s almost too loud for me to enjoy as a tea to drink before bed [which is what I’d want it for since it’s decaf], but for the time being I think I’ll really enjoy this tin.

When I saw this on the Samovar website I immediately thought of Harney & Sons Spiced Plum, which is really good (I think). I didn’t realize Cinnamon Stonefruit also had plum in it. I’ll have to add some to my next order.

Okay, that sounds pretty awesome! Another Samovar win. I love it how different mouth positions and techniques work better for some teas more than others.

@Shanti It’s one of the most WHAM, KAPOW, I’m-gonna-throw-some-flavors-at-you-and-I-don’t-care-if-you’re-ready teas I’ve had in a while.

@teaplz I love it, too! It keeps things interesting, fo sho.

Okay, I love the summer chlorine description. I spent many summers by the pool and the smell of chlorine on heated concrete is just wonderful. I love this tea from afar. So much.

@Auggy I know, right? A big part of me really enjoys the smell of chlorine. A little part of me remembers the 5 AM, 6 AM practices and swim meets and winces. But the bigger part is very much, “Ahh…memories.”

Yum! I was a little scared to try this because of the hibiscus (and it brews up deep, ruby red and I thought for sure it would be very hibiscus-y), but, as it turns out that while the hibiscus does contribute a lot to the color of this tisane, it doesn’t contribute quite as much flavor to it. Oh sure, I can taste it, it just isn’t off-putting the way hibiscus can sometimes be.

What I taste more than the hibiscus is the flavor of cinnamon, plum and currants. And it tastes yummy! It is reminiscent of plum cobbler which was a favorite dessert from my childhood.

I don’t know if Samovar has discontinued this blend or not, though, because I can’t find it on the website. Oh well… it’s enjoyable, but I don’t think it is something that I must have in my tea collection.

Considering all of the teas I have tried…I have NOT tried all that many from this company!

I viewed what the tea was composed of and what the company had to say of their tea. Although I tend to be put off by all things with licorice in it; I have added this to my shopping list for someday.

Licorice in my opinion over rides most flavors and mixing it with cinnamon and currants what collision and roughness in flavoring. Wow, oh my God, how can they do this and have done this is my thought but I cannot know this as yet. Since I have yet to drink/sample it.

Wonderful review; I like that it pairs well with sauerkraut; a favorite. Yum!. Kudos even.!

Well I bought this tea because it was on clearance and I love all of the ingredients. When I smelled it for the first time it smelled like a baked plum. When I brewed it I could smell the hibiscus and licorice more then the plum. With the first sip I would taste the plum right away then the licorice towards the back of my mouth.

Then came the hibiscus and the licorice again. The plum disappeared on me.

This tea tasted like medicine. :( I’m not exactly sure what the ingredients are since the company didn’t bother to put it on the tin, but I taste hibiscus and cinnamon and I must say they do NOT pair well at all. I literally almost threw up. Yuck.

I have to say the marketing on this blend is really top notch. Against my better judgment I ordered a tin of this, knowing full well that I have a strong aversion to hot fruit.

Well, I brewed this and it smells great, but yah it falls on the tart side which doesn’t really work for me.