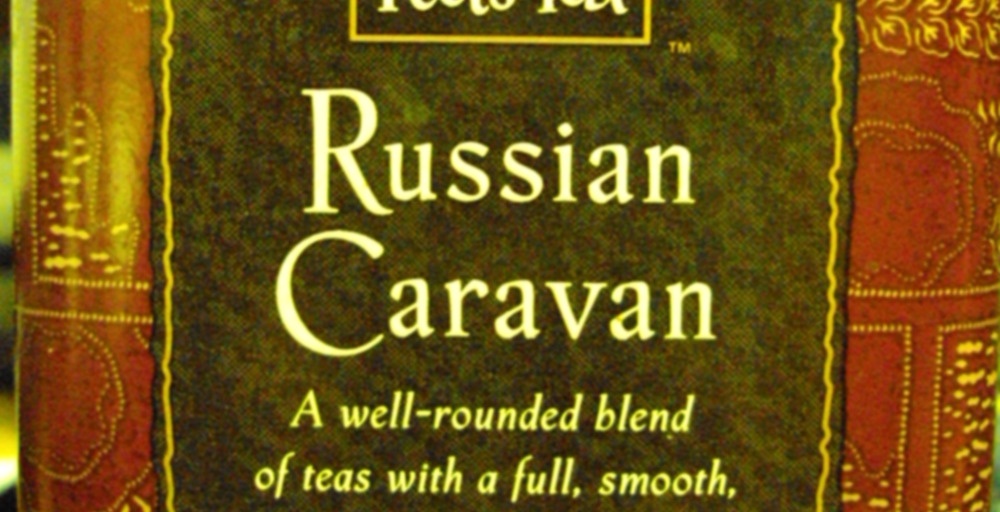 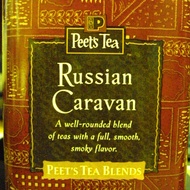 This signature blend isn’t actually of Russian origin, but honors the tradition of the 19th century tea trade. Well-rounded with a full, smooth, ever-so-slightly smoky flavor.

Horse and camel caravans would spend sixteen months making the roundtrip journey to Eastern China, arriving in the Russian capital laden with chests of tea. The leaves aged a bit along the way; Russian Caravan’s quality probably improved significantly with the opening of the Trans-Siberian railroad. Peet’s take on this historic favorite is a Signature blend of China black teas for a smooth and smoky cup.

I tried this again today at Peet’s thinking I might like it better this time… I was wrong.

As anyone who follows my tea log knows I like some smoky teas but this just seems to have no subtleness at all, it’s harsh and nasty in my opinion. I imagine whatever this is blended with is just too strong for the lapsang. Eccch.

I like the Russian Country from Harney and Sons which is a lot nicer, IMO

“Liking” because of your comparison with H&S. I have some Harney’s Russian Caravan in my stash and might have been tempted to order Peet’s. Now I think I’ll take a pass, and remove it from my shopping list if I find it’s there. And it’s high time I tried the Harney’s to find out whether it’s still viable. (I think its > a year old.)

I’m about to start a “staycation” so I’ll have lots of opportunities to sample my stash! I bought this when I was hunting for a replacement for Twinings’ Russian Caravan and had rejected it because it was “just another Lapsang Souchong,” LOL! Wish I knew what it was that grabbed me about the Twinings’ because it isn’t sold in the States any longer. But I don’t remember it being smoky at all.

Guess that’s why Peet’s has the word Coffee after the name. I love the Major Dickinson coffee…that’s about all!

Unclear just how much tea I drank last night, but I realized I never logged any of it. Oh well, this is the first cup of the morning!

For breakfast at sf ferry building, with a mariposa bakery cinnamon roll :) that’s more like it!

First of all I’m geeking out because I got 4 tea swap packages in the mail today. Thank you kaybee for sending me this tea. I would say this is a perfect blend of black and lapsang. Reminds me of English Breakfast with a little bit of smokiness. I like this a lot!

I really liked this tea. It was nice and malty, and went great with breakfast. I bought this while on vacation, like some of my other Peet’s teas. However, the taste was a little surprising.

I opened the can, and smelled the familiar smokiness of Lapsang Souchong. In stead of finding merely black, smoked tea, I also found golden-silver leaves mixed in. I wondered which teas they were, but the description online and on the tin only described them as “China black teas”. Despite not finding which specific teas were in the blend, I knew that Lapsang Souchong was the base.

I poured the water in the teapot, and let it brew for about 5 minutes. I did notice a different scent than just smokiness. When I tasted it, it reminded me of English Breakfast. Smooth, brisk, and slightly malty. This went really well with the smoky flavor.

The only downside I could find was that there were more stems than I would have liked in my tea. Not too complex, but not very simple either, this tea makes for a wonderful morning cuppa.

I absolutely love Lapsang Souchong, and am a fan of other smoky black teas like Keemuns – so everything about this blend had my expectations high. They were absolutely met. Russian Caravan is a wonderfully smooth and smoky blend, truly perfect for the morning pick-me-up with a caffeine kick, but no real bitterness.

The smokiness isn’t just the “subtle smokiness” some teas “evoke”, because this blend has actual Lapsang Souchong in it, and by extension actual smoke. The Lapsang’s presence is absolutely clear, but it doesn’t overpower the other flavors. Unlike a straight Lapsang, Russian Caravan still tastes first and foremost like black tea, rather than a campfire.

The distinct aroma and flavor of Lapsang are cut by the mellow and smooth roasty tobacco flavors of a good Keemun, diluting it enough to make this a balanced blend, an achievement considering how the smell of Lapsang so permanently embeds itself into everything it ever comes in contact with.

If you do not like Lapsang Souchong, you probably will not be able to come to terms with this blend – but being such a polarizing, cult-inspiring tea, if you love it, you’ll likely love this. This, like Lapsang, is a tea for people who see “It just tastes like ashes”, “this is way too smoky” or “It tastes like a campfire” in other people’s negative reviews, and salivate because those people just don’t get it.

The roasted, mellow best of a Keemun, with the true smokiness it needs and only a Lapsang can bring, in the endlessly drinkable lightness you get from a blend. I think this is by far my favorite black tea so far, if one counts straight Lapsangs, Pu-erhs etc. as their own categories.

I bought this tea recently thinking I was getting some other Russian Caravan-type tea, but I was so incredibly delighted when I smelled the leaves and discovered that it is essentially Celestial Seasonings’ Morning Thunder tea in loose-leaf form! I grew up drinking Morning Thunder, and it is one of those teas that jogs so many memories, just by the smell alone.

I don’t re-steep this one. I think you get the best steep at about 3 – 5 minutes.

After reading some other ‘reviews,’ I’ve discovered that Lapsang Souchong is a smoky tea? I’ll have to look into that one!

The smokiness, the richness, the full flavor… I’m so thrilled with my accidental discovery!

I was so excited to taste something that smelled this smoky and exotic. However, I was highly disappointed. I just thought it was flat and tasted nothing like the scent. I will try it again before I decide I don’t like it.

I found it disappointing, too. :( I’m going to get some of the Harney and Sons version with my next order from them, and I’ll split it with you. Theirs is really good and smoky.

It smells nice and smoky. The problem is, the smokiness barely comes through in the flavor. It’s there, but it’s not very strong. In fact, there’s a tiny bit of a sweet aftertaste, which is actually pretty nice, if surprising — but I wanted smoky, and after Harney & Sons’ Russian Country, this one’s kind of disappointing.

There’s nothing wrong with it; it’s just not what I expected. Maybe it’ll grow on me.

Exotic and smokey, with a nice aftertaste. I really enjoy this with a bit of cream and sugar but it does dumb down the flavor a bit. The recommended steep is 2-4 minutes, but I enjoy steeping this one a bit longer, it tends to get smokier without getting bitter. Great for a cold day, and a good breakfast tea. I love it!