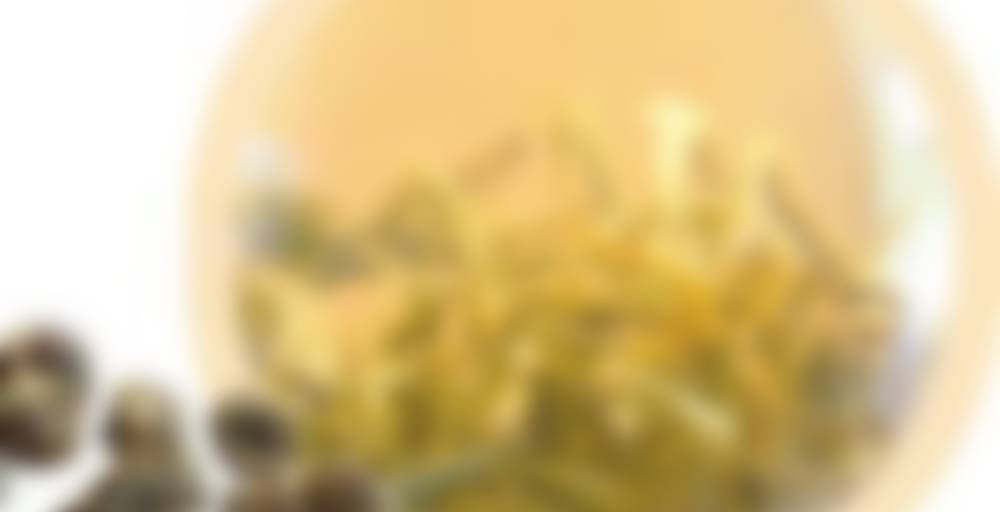 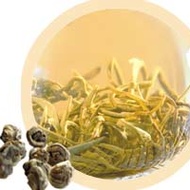 by Numi Organic Tea
85
You

The most tender green tea leaves are hand rolled into small pearls and scented with fresh jasmine blossoms. The fragrant flowers are mated five times with the tea according to traditional tea scenting techniques that date back over nine centuries. This high quality jasmine tea from Fujian Province has a sweet aromatic flavor with bright floral notes.

In the mood for sweet, light teas tonight, so this was perfect! This tea (and the other Numi flowering teas I have) is from a boxed set of 9 samples given to me a few years ago, so I was a bit wary about how things may have held up. It appears my worries were unfounded though, at least with this tea!

I had previously (shortly before joining Steepster, I think) used up half of the packet of these cute little Jasmine Pearls for a cup of tea, so used the other half today. Although I assumed that I was supposed to use the entire packet in one go, I definitely don’t think the flavour is lacking, so it’s nice that I was able to spread them out over two cups!

The flavour of the tea pretty much smells like jasmine, and gives me serious cravings for my favourite chinese restaurant back home, and their hot and sour soup, chicken chow mein, mixed veggies…. drool Taste-wise, that’s exactly what it is. A nice, light jasmine. No fooling around, nothing funny going on here, it’s simply a jasmine tea. There’s something to be said for simplicity, when one’s tastebuds are tired of trying to tease flavours out from other teas!

I don’t have a ton of experience with jasmines (aside from in the aforementioned chinese restaurant), so I have no idea how this compares to any others, but I would certainly pick it up again if I wanted a dependable jasmine green tea. Of course, I’m likely to try others first, but this one is pretty good.

(Side note: the instructions that came with the box of Numi teas indicate that all the teas included (greens, blacks, and whites) should be steeped with boiling water. I disagreed, so steeped this one somewhere below boiling, although I didn’t record the temperature. I’m perfectly happy with it, and suspect I might have ruined it using boiling water.)

yeah…I generally recommend ignoring most ‘brewing directions’ that most ‘store’ bought teas or tea companies come with…they appeal to a general public that isn’t familiar with the range of brewing parameters and they also have to keep themselves distinct and so the simplifying process leaves nuance out. I always play with my instincts with a new tea or default to a tea industry standard cupping of 3g in 6oz water and vary temp with type of tea….I find that with pearls they work really well with about 190 degree on the first steep and cooler-longer steeps to follow. I would also bear in mind jasmine flavor is strong and is volatile and will weaken over time and green tea has a shelf life of ideally 6 months…it was probably weak due to age.

Such a lovely experience to steep this tea in the little glass Numi teapot…the jasmine pearls are divine after first steep.