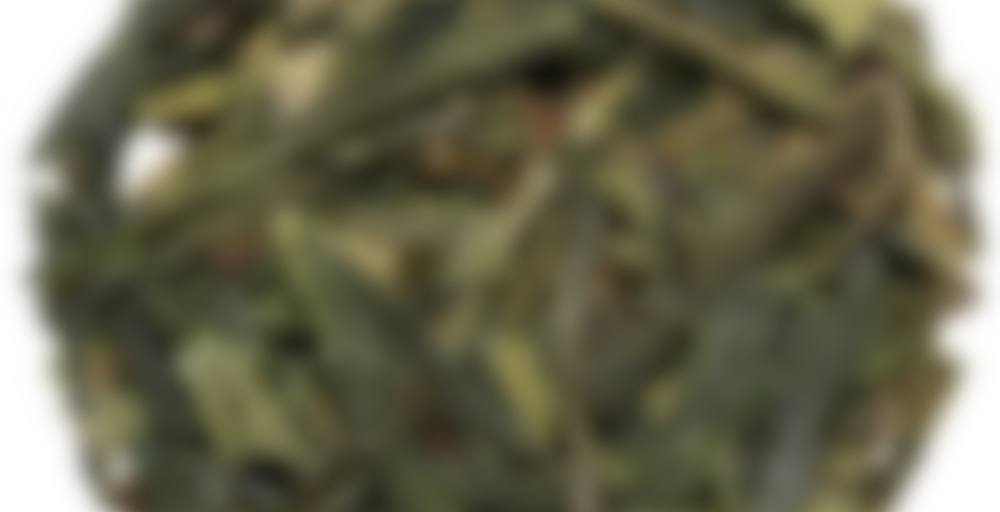 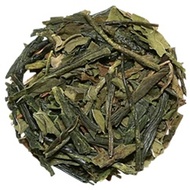 A crisp blend of Japanese green tea, dried spearmint, and peppermint. The mentholated liquor is soothing and rejuvenating after a long day at work.

Sipdown no. 45 for the year 2014. Another teabag from the work stash. Despite the temperature given on the slider, I really can’t say that’s the steeping temperature because yet again I forgot the thermometer.

The teabag has a gentle minty fragrance, and the steeped tea has a hint of mint to it as well. There’s something sweet and green tea buttery underneath the mint. Tea liquor is the color of melted butter with a slight green tinge.

The mint is clearly present but not overpowering in the flavor and is a nice blend that reminds me of why I like the blend of spearmint and peppermint in Tazo Refresh. The spearmint mellows the peppermint to keep it from being too much like an Altoid. It does have something reminiscent of a Double Mint gum, which may be because there’s no mediating influence of tarragon as in the Refresh. The green tea’s flavor is not something I can easily separate out, but I do get a buttery, soft flavor to the overall tea that I attribute to the green tea.

It’s tasty enough, but for a green mint, my heart belongs to Samovar’s Moorish Mint.

I received a sample of this tea in the Lupicia Newsletter that arrived in my mailbox this afternoon.

This is really very good – one of the better mint green teas I’ve come across. The green tea tastes buttery and smooth, it’s quite rich! I really like the combination of spearmint and peppermint. The crisp, minty taste with the buttery/vegetative taste of the green tea is really delicious.

Oooh, I like this more than any mint green tea I’ve had yet. I received a free sample with my Lupicia order that came in today. The spearmint and peppermint go really well together. I’m really liking the tingling sensation that this leaves in my mouth. I may have to pick up some more of this, probably just in bagged form for convenience. This is really helping me relax and settling my stomach tonight.

Normally I’m not a huge mint girl, but who can argue with a free teabag, right? Plus, while I tend to shy away from peppermint (which seems to be the typical ‘mint’ flavor everyone goes with), I am a spearmint fan so I figure there’s a decent chance of me liking this.

Dry it smells sweetly minty which I think is a good sign. Steeped up, though, it’s weird. Mostly because the sweet, lighter-toned mint is mixing equally with the darker, almost musky smell of green tea. It’s not bad so much as really unexpected. I mean, how often do you smell green beans and mint at the same time?

Even though the smell is quite strong, the taste is much gentler and the two flavors blend fairly well. The first and last taste is a menthol minty whoosh but the rest of the taste is a mix of mint and buttered green veggies, specifically now soybeans. I would definitely call this as more of a mint tea than a green tea since mint is the dominant flavor, but the green tea isn’t hiding, just plays a more supportive roll.

This tea does leave me with some mixed feelings though. As a mint tea, it’s good – it’s noticeably minty and helped unstuff my head a bit, so points for that. Additionally, the green tea gives the mint a little depth, which is nice since straight mint teas can be somewhat flat. But as I drink it, I can’t help but think it is the liquid equivalent of eating soybeans seasoned with mint. Which is not something that I think I’d ever do, even after having this tea. It just… doesn’t seem right to me. That being said, I’m totally open to an awesome soybean & mint recipe changing my mind. But even after this tea, that combo seems weird enough that I’m not going to search it out.

Ultimately, I think this is a tea I could potentially get behind if given more time with it. But since there was only one free teabag and not three, I probably won’t get a chance to spend that needed extra time because I’d have to buy some more. And buying more of this tea is just not something that this cup has quite convinced me to do (unless, for some reason, I just really needed a mint tea).
1 teabag (2.3g)/5oz

How did I ever manage for 3 months as a telemarketer? Sure, I was REALLY horse by the end of my work week which included working 36 hrs in 4 days, 2 of which were 12 hr days… but I’ve only been calling 4 days now, about 6 hrs a day and I’m coughing so hard I’m almost making myself sick. I NEED mint green tea… unfortunately this is the only bag I have and I have no loose either.

I’m definitely drinking this for functionality tonite- I didn’t even check their suggested prep. Steeped a bit hotter and longer than usual to bring out more peppermint.

Inspite of my abuse, it still does have light and smooth qualities in addition to the slight bitterness from the battered green tea. The mint isn’t as strong as I need it to be, but it’s still very nice.

Smells like Doublemint Gum. Tastes like a green tea buttermint. Refreshing and soothing. A little light and thin…“crisp” is right.

Not much else to say. This is simply good! If you like mint, that is.

It’s not after 5, it’s only after 2, but I"m all spun up with work stuff and I really need some calm. Hoping this will help…

Thank god I saved this tea for later in the day… it helped prevent me from picking up the computer and shaking it til Microsoft access worked properly.

This tea is a very yummy Moroccan mint type tea (which I love!) Glad I had this sample to try!!! Okay back to mircosoft access now :(

My favorite iced tea is basic Moroccan Mint and I recently came across this.

The mint notes are a bit fresher and the green tea is nice and subtle. I actually steeped it a bit too long, but didn’t get that off/bitter taste when that happens.

It’s so delicious as an iced tea. I really enjoy it.

Now they do call it “After 5,” but if green teas keep you up, like myself, I’d avoid it in the evenings.

I think someone added a ton of minty teas… love them! It was also nice to retaste a different pouch of Santa’s Secret. Still delicious and exactly the same as my old pouch! Anyway, this is another great minty green tea. So refreshing with both mint and spearmint. Thirst quenching! The leaves look very tiny however (doesn’t mean the flavor gets bitter though). The mint leaves are bigger than the tea leaves.
Steep #1 // 30 min after boiling // 2-3 min
Steep #2 ??