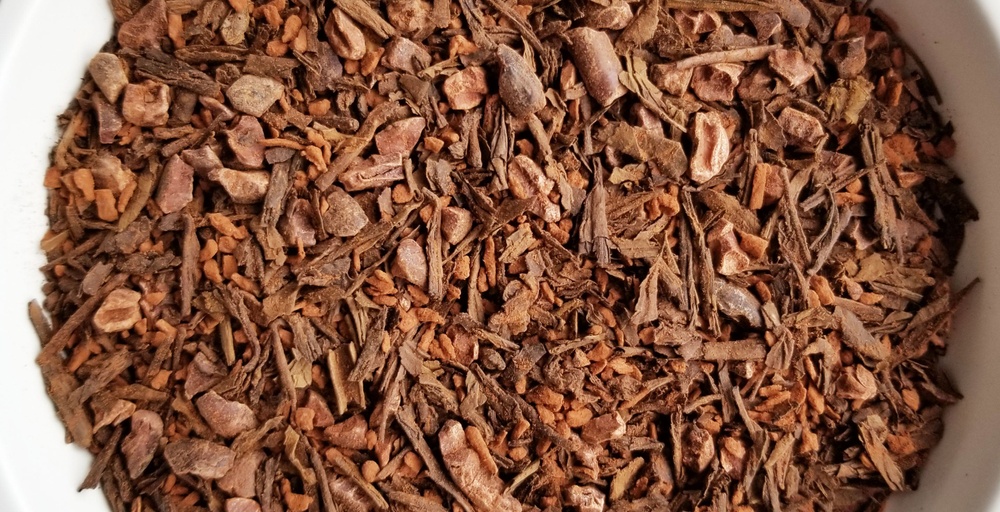 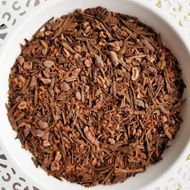 by Dessert by Deb
78
You

Hojicha and chocolate?! OH YES! Decadent, rich, AND light as air all at the same time, the warm, roasty flavours of cocoa and hojicha come together with coconut in this dessert blend for a creamy, silky infusion reminiscent of a chocolate silk pie! Steep and prepare with milk, as a comforting hot tea latte, or even as an iced latte for a hit of yummy chocolatey goodness that will have you serving up another “slice”!

Steeping instructions: 2 tea spoons at 205F for 5-6 mins steep and prepare as a latte/with milk!

sample from variaTEA – trying to get through them all :) Not a fan of this one but didn’t expect to be. I find deb uses a bit much coconut in her blends for me to get behind most of them. Not terrible, but mostly just coconut hojicha with brown murky residue in the bottom of my cup.

Definitely some fiddling to do with this tea…

It was nice because the hojicha is really solid quality and deliciously roasty and toasty, but the chocolate tea is far too thin and weak for a “chocolate cream pie” concept and the creaminess was also a little lacking for me. It’s also insanely oily in terms of mouthfeel from all those added in bits of chocolates. I found it just a little off putting in terms of texture. I think it would be fine as a latte, but I’m not confidant that the tea itself would have the flavour/body to hold up to being made as a latte.

This is absolutely delicious. The toasty, caramelized notes of the hojicha combine with the rich, dark chocolate flavor so well. I appreciate that it’s not too sweet.

It’s exciting to see Deb doing more flavored hojicha blends! Truth be told, I still haven’t tried the cinnamon raisin one that I have a packet of, but hojicha blends are so rare in general that I’m always excited to see them.

This last cuppa is actually much better than the previous ones. It’s probably because it’s the bottom of the packet, so maybe there was a higher ratio of cacao nibs and/or coconut. Whatever the cause, I’m actually tasting quite a bit of chocolate and coconut, where in previous cups I was mostly just getting hojicha. The chocolate tastes more like the milk variety, though perhaps it’s the coconut that pulls it in that direction. The hojicha is lightly roasty, which goes very well with the chocolate.

I won’t be reordering this one, just because the majority of the cups I had were mostly hojicha. That and it does steep up rather murky and oily, which is always a turn-off for me in tea… But I’m glad to have tried it!

The hojicha cinnamon raisin bread putting is one of my favourite teas ever! :) I hope you get to try that one!

I am going to be so sad when this runs out, but I believe Deb is going to make this a permanent part of her Spring collection.

It tasted like a nutty, roasted hojicha tea with hints of cacao and coconut. I am surprised by how smooth this blend is since cacao tends to be grainy. Loved it! :)

I really liked my first cup of this, but the second didn’t quite wow me in the same way. Not sure if I needed to use more leaf or steep longer? It just didn’t have as much flavour, and I couldn’t pick out the cocoa as well. We’ll see how future cups go, but I’m likely to buy at least another 25g of this to experiment with.

I haven’t really gotten much chocolate or coconut out of this one. I think I have one serving left so I may try adding milk to part of it…

This was a sample in the order that arrived today. I was happy to see it since it is one of her newer teas she mentioned that intrigued me. I made it as a latte and then sent some samples to Sil and Roswell Strange. This looked awesome and super chocolate-y but flavorwise, it was mostly roasted hojicha. The last few sips had chocolate and cream though, which was nice. This was my favorite of the 3 teas I tried from the most recent order so far but this is also not one I need more of. Also, I paired it with the caramel filled stroopwafel-like cookie that Deb sent in the sub box. It was delicious and a fun pairing to the latte.

This is a tea that I am super excited to purchase since I enjoyed her cinnamon bread hojicha! :)

OMG so excited for this! Hojicha all the way!

If you enjoy hojicha, I think this is a nice option. I am off and on with hojicha so I was fine with the one latte.