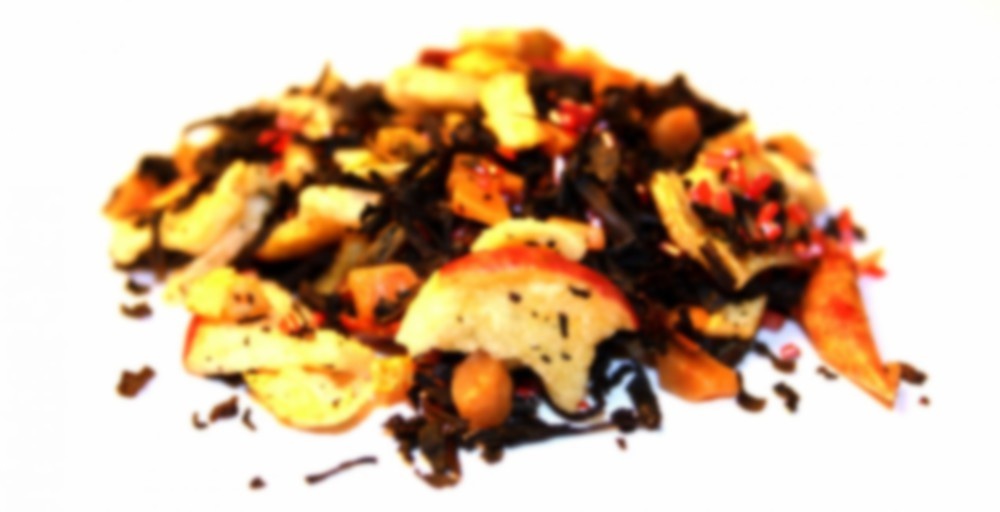 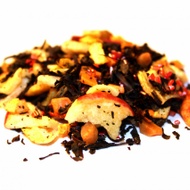 Just like your favorite candied apple from a wonderful fair, so is this black tea! Just the look of this tea will drive your tastebuds crazy. Then you taste it, you’ll not want to stop drinking it all day! With the perfect blending of caramel flavor and candied apple pieces and real apple.

Oooh no this one tastes odd to me. I am not getting caramel apple at all. It tastes like Thai curry. It’s just really freaking me out because it tastes so much like it. It smells like there’s lemongrass in here, and it tastes like it too; I’m wondering if I got a bad batch? But it doesn’t look like there’s lemongrass in the bag. I am very confused. It smells like a cup of tom yum gai, and now I reeeally want Thai food.

(I think it might be a weird reaction to the dried apple in the bag. Augh, tastebuds, why.)

Weird…totally tasted like caramel and apples to me when I tried my sample. Maybe you’re just hungry grin

Hahaha I wish, I did want Thai food the other night but no one was open for some stupid reason. I can smell lemongrass in the dry leaf too, but in there I can smell caramel too. So weird.

Hmm.. I don’t get that from this tea at all. But.. Thai food is my favorite! Now I almost want a tea that tastes like tom yum gai.

Exotica from DavidsTea! I would have never in a million years tried if it they hadn’t sent me a sample, but it reminds me so much of tom yum and I need to get 50g next time I order.

Nooooooo don’t say its so! I ordered some of this and I HATE lemongrass as everyone knows! SAD SAD SAD!

I think you will be ok Azzrian, I just sniffed my larger bag of it and can’t get lemongrass at all.

Amanda, hmmm… While I do love lemongrass I can assure you we did not mix any lemon grass or lemon flavoring in the Caramel Candy Apple. As soon as we read your review we pulled the remaining tea from the batch your order came from just to check. haha. No lemongrass, just lot’s of apple chunks. We greatly appreciate all the reviews from you and everyone! Keep ‘em comin’! haha. :)

Now I feel like I’m insane. I sent some to Rachel so we’ll see. But it’s so there even in the bag. There was no sort of contamination so I am so confused.

Amanda, I messaged you about a new sample. We will get that out to you! :)

That IS weird Amanda. I know my sample had none. Crazy!

WHEW good to hear no lemongrass is in the blend! Hope mine is good :)

So this is a really subtle tea, but it really is caramel apple! I am so digging the apple notes in this tea, especially since it’s not IN YOUR FACE apple…and it’s not that weird fake apple you get when you have apple candies or whatever…it tastes like apple and caramel. There’s a bit of a cinammon taste in this but i’m not sure if it’s ‘cause i didn’t clean up my finum from the last tea. I’m kinda doing a bunch back to back in between wipes tonight (playing WOW).

I usually love candy apple teas, so I had high hopes for this one.

I’m so disappointed with the taste. I’m not getting caramel or apples at all. The smell of it when it’s brewed is a bit odd. To me it faintly smells like cleaning supplies and fake butter? Thankfully it doesn’t taste like that, but the taste isn’t great either. Not quite bad enough to dump down the drain (yet) but definitely one that I keep wondering how to fix with every sip.

I must be doing something wrong? :(

Another from the travelling tea box!

I used 2 perfect teaspoons in my Travel Mug and we took it to Point Pleasant park and admired the chipmunks and big fat bluejays. It’s blizzarding where I used to live.. it’s plus 18 here today. WHOOP!

This was a great fall companion tea! The two most prominent flavours I got were sweet apple and cinnamon – it was followed by a caramel and candy taste and something a bit floral, which put me off a bit- and it was almost a bit too sweet for me! There was something strange in the aftertaste, it reminded me a stevia, but I know there is no stevia in the blend. Maybe an aftertaste from the sugar crystals? Either way it was a bit cloying.

Anyways, that’s minor, it was still a yummy blend! Not one I would purchase for myself, but one I was very happy to try!

Aw I love squirrels. I go to the park every day for my lunch hour and sometimes I end up feeding the squirrels my lunch haha
This does sound like a very nice fall tea :)

Oh, this sounds good! How much does it cost to send the tea box travelling to the next person, on average?

Caramel candy apple seems to be a flavour hard to achieve properly with tea. I have tried a few and they also ended up tasting like an apple pie of some sort. Do you know one that is closer to the true taste?

I think that Davids did this relatively well with Big Apple, though I would love to see them do it with a black tea or dark oolong too.

This one definitely didn’t taste like apple pie! Definitely closer to a candy apple :3

@Heather – between 15-25 bucks for the travelling tea box, depending on if it’s within Canada or US :)

Oh, ok. Thanks! I have been reading about these Della Terra teas lately and they seem to all be very good!

This one smells quite lovely, all caramelly and good, but the flavour’s a touch off for me. Sure, it tastes like caramel, and a bit like apple, but it’s a bit oversweet, as if there’s stevia in here (yuck), and it leans towards tastes a tad chemically. Also, I finally get why people say it tastes like curry; I am more inclined to call it caramel apple, but it definitely has coconutty/lemongrass/thai flavours that are somehow coming out.

Anyhow, not too sad that this one’s done.

Got this in a swap with Tea Sipper, thanks! Interesting that this is caramel AND candy apple… usually they are two different things, not the same, lol. This has large chunks of apple in it, which looked good, but I am not really digging the oily sheen left on top of the tea after steeping. I keep getting wafts of the scent of dried apple chips, which isn’t too surprising I guess, and when I really smell the cup I get a more powerful aroma of cinnamon dried apple chips.

In the flavor I am definitely getting the sweetness of a candy apple, but by and large it is mostly dried apple chips, which are usually very sweet on their own. There’s also a tartness to the aftertaste that also reminds me of apple chips. No caramel to speak of, and a non-present black base (but that wasn’t a surprise). I am kind of surprised as I have had other apple teas with dried apple in them and I don’t get the same sensation, possibly because there is a difference between soft-dried apple rings/chunks and hard-dried apple chips, skin and all.

I’m actually really enjoying this tea, which surprises me. My rating keeps creeping up. I don’t think it’s successful as a caramel OR candy apple tea (and not together for sure), but as an apple tea? Sure! I love those apple chips and now I want a bag of them.

I’ll have to check this one out next time I order from Della Terra! :D

I’m glad you liked this one more than I did!

I understand why it has such mixed reviews… if you are looking for caramel apple, it is disappointing. Luckily I didn’t get thai curry from it like some others!

My last sample from Della Terra! Thankfully I have an order from them in the mail, though (perhaps sadly) I didn’t add this to my order. It smells soooo good, but I have a caramel apple tea from Culinary that I enjoy. This, however, is quite different!

I’ve found that Della’s teas brew a little weak, so I used my whole sample (which was probably good for 2 small cups) on one mug. It’s such a pretty color, just like a shiny red apple! I added sugar and a splash of milk since, hey, it’s a dessert tea! Granted, I made this for the bf and only had a sip myself. It’s tasty, caramel-y and with a strong apple flavor followed by a hint of candy goodness. It’s not a complex or delicate cup, but definitely fixes sugar cravings!

I like Culinary’s apple teas, too. They’re actually appley, instead of just hinting at it.

Yeah, I find the apple lacking in a lot of teas but Culinary gets it spot on! This one was really apple-y as well. I do think I prefer Culinary’s caramel apple to this one, though.

Playing around with the steep time of this one, I did a new cup for 5 minutes. Bolder flavor but bordering on the bitter after notes. I think 4 minutes will be just perfect in the future.

Goodness this tea is so good.

awesome. thanks for the tip. I got this one in a sampler pack and have yet to make it.

Received this one from RogersCK in round 1 of the Secret Pumpkin swap.

To me this one smells weird. There are pieces of dried apple in this one, I often find dried fruit smells weird to me, kind of alcoholic like. It is also very pretty looking with little red sprinkles in it.

I used 2 tsp to brew a about 8 oz cup, which is unusual for me, I usually go with 1 tsp. But there was large chunks of dried apple so I probably have 1 tsp of actual tea with the dried fruit in addition.

The smell of this one is reminding me of dust. Like a piece of dusty furniture. It is not making me sneeze, but just the smell of it. Not sure where this is coming from.

The tea tastes not too bad. I can definitely taste dried apple, almost like a green apple but not terribly tart. I am getting hints of caramel. I can definitely taste the red sprinkles, which have always had a distinct taste to me. I am happy to say there is no dusty taste. I think the name of this was, caramel candy apple, is accurate.

Totally dragging my butt this morning and wanted something sweet. For some reason this tea tastes more over the top apple skin flavor than normal today.
Not getting the caramel, but digging the natural apple flavor.

Man, I want a candy apple! Or not, I should go workout.