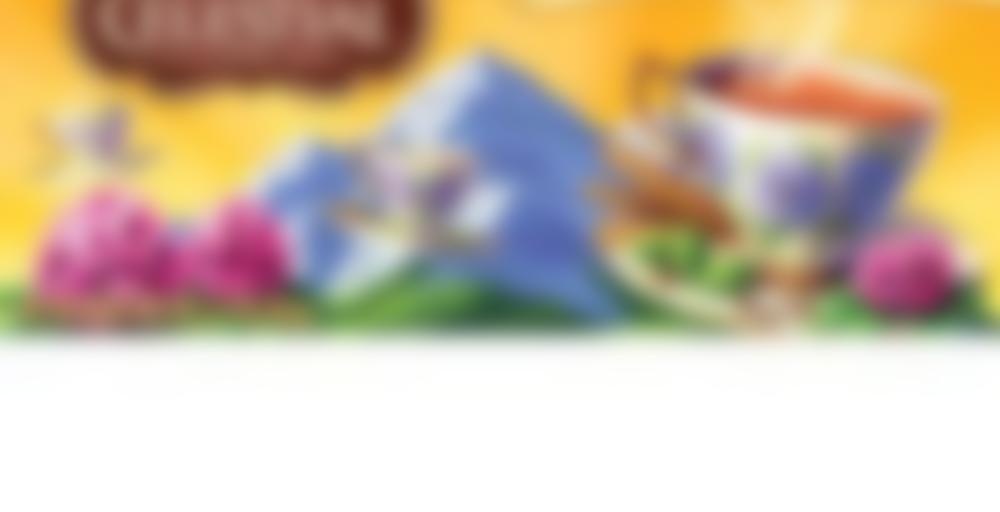 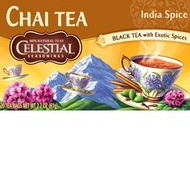 “It’s said that every family in India has its own chai recipe. You might call India Spice Chai the Celestial Seasonings family recipe. This authentic blend infuses rich and hearty Assam black tea with lively spices like ginger, cloves and cardamom and a touch of smooth vanilla. Add warm milk and sugar or honey, and prepare to embark on a true chai experience.”
— Charlie Baden, Celestial Seasonings Blendmaster Since 1975 to all the red tea descriptions

Got a pack of this for Christmas – I’m 100% out of every other kind of chai I had, so I’ve been making this.

This one is definitely heavier on the black pepper than anything else I’ve tried. Not sure I’m a fan, but it’s interesting – the hard bite at the back of your throat after every drink. The peppery-ness combines with a smokey overall taste – possibly the roasted chicory? The cardamom is also a lot stronger than the cinnamon in this one, which isn’t really my style.

It’s nowhere near the quality of the other chai I’ve had, but it’s decent when there’s nothing else!

This was one of the K cup options at church and I wish I had made a coffee instead. Very disappointed on the flavor in this tea. Weak tea flavor but over powering cardamom/cinnamon flavor that was not pleasant. This was a bad choice for the end of a great tasting tea day :( This is why we need a Steepster app. I could have looked up the reviews before making my final decision :)

It’s my lopsided and biased opinions that K-Cups pretty much ruin the taste of anything.

I can’t stress enough how much we need an app. I can’t believe no one has made one yet! :(

I like some of the K cup coffee options, so I thought I’d give the tea a chance. Sadly, the way a Keurig works does not properly brew tea :(

The worst chai I have ever tasted. Prior to trying this tea, I was under the impression that chai was pretty hard to mess up. Let me preface this by saying that I am not a “chai snob”; I grew up on homemade masala chai tea and enjoy the loose-leaf varieties, but I’ve also been impressed with the not-so-expensive bagged offerings from Tazo and Stash Teas. So, I was under the impression that maybe chai was just this miracle brew that was just impossible to screw up. Yeah, I was wrong. I’ve tried this chai with and without milk, with and without sugar, light steep time to long steep time, different temperatures of water. Every single time it comes out tasting like bitter cardboard marinated in cinnamon. I don’t know how else to describe it. Avoid at all costs and try Tazo or Stash if you’re looking for bagged chai.

This is sad! But I’m liking this because I appreciate the heads up. Loose (IMO) is better, but sometimes I’m just lazy. Have you tried Bigelow’s Vanilla chai? That was my 1st experience w/ chai. In a completely uncontroled steeping environment too- hot water of an unknown temp at an airport and I didn’t time the steeping.

I haven’t tried the Bigelow vanilla chai yet…how did you like it? Have you tried it after the airport experience? For me, chai IS lazy tea, and most of my chai is bagged. :) I want chai when I want to be comforted and warm, and bagged chai is perfect for those times!

It was good! I haven’t tried it since then because I try to avoid bagged tea due to a personal preference. My favorite chais are the tea I’m craving + chai spice mix. I’m very picky about all my flavored teas. I like to be able to taste the tea and not just the flavor. That allows me to not only have any flavor chai I want, but to control the spice level.

Do you have any recommendations for loose leaf chai? I am also not a fan of bagged teas (chai being the exception, because it works so well in a rush). I’ve heard disappointing things about loose leaf chai, so I haven’t worked up the will to order some yet. (Not to mention, Celestial Seasonings ruined my faith in chai reviews…there are so many good reviews on Amazon for it! Maybe I just received a bad batch…)

I say drink what you like, so pair chai spice mix w/ any tea you like. I like Adagio’s chocolate chip and rum teas. Their green chai and thai chais are pretty amazing too. I also like to make chai w/ green caramel and caramel creme oolong. I’m thinking I’m gonna have to make a premium sencha chai sometime too;)

Fixed with a K-cup in the machine at the dentist. Nice but not a great cup. It reminded me of The Republic of Tea’s Cardamon Cinnamon Herbal Tea. The Cardamon overshadows the other flavors.

This tea has a number of very negative reviews on here, which certainly didn’t make a case for my trying it. What did urge me to do so was that it has almost the exact same spice mix as my holy grail chai—something I’ve been unable to get in other chais, maybe because they rarely have star anise and nutmeg, which I find really rounds out the flavour. The only difference between the ingredients is that this has vanilla, pepper, chicory, and black tea. Other than that, in its ingredients and in the thrust of the flavour, it’s somewhat reminiscent of my favourite chai, and more so than any other chai has been so far. Of course, the quality of the other chai is much higher, because it uses whole spices that are boiled for a long time and this uses a tea bag (and as anyone who uses spices knows, when spices are ground or cut into little bits, they lose their flavour and potency more quickly than whole spices do.) Wanting a spicy cup of deliciousness, faced with the lack of availability of my favourite chai, and unwell to boot, this chai was what I needed. Yes, this tea’s not fancy, but it does the spice mix pretty well and it’s a quick, easy treat.

I had this as a latte with sweetener, the way I always drink chai, so I can’t comment on the bitterness other people have had (I really can’t understand the idea of drinking chai unsweetened, anyway). This tea smells good, tastes good, and in stark contrast to my favourite chai, is quick to prepare. It’ll never be my favourite chai, but unlike a number of others I’ve tried, it’s worth drinking again.

I’m unclear on whether the reason people don’t like this may be because the spices are different to that in a lot of chais and that doesn’t appeal to them. It’s hard to tell, because a lot of them just seem to say, “It’s not good!” I’d say for me, the main disadvantages to this are the vanilla (not only was it a bit strong for my liking, I still kind of feel like vanilla is a bit inappropriate in chai [maybe that’s just because it’s easily overdone, though]) and the fact that the spices weren’t assertive enough with their spiciness. The combination of the spices not being spicy enough and the vanilla being a bit strong meant that, although the spice flavour itself tasted authentic, this execution of chai didn’t seem very much so. I missed that sense of heat that I got with my favourite chai, something that I think really adds to that “chai comfort effect”, and I felt like the strength of the vanilla in this pushed it into dessert territory in a negative way. Also, the black tea flavour doesn’t make its presence felt that much, but since I’m really in the chai for the spices anyway, that didn’t matter to me.

I guess if you’re looking for a robust black tea with heavy chai spiciness, this isn’t going to be for you. But if you’re looking for that, do you think you’re going to get it in a tea bag, and one with a dessert-y element like vanilla at that? If you read the box and thought that the black tea would be “rich and hearty”, the spices “lively”, and the vanilla present as just “a touch”, then I could maybe understand disappointment with the product.

From the chai teas I have tried there are none that seem to taste or smell like celestial seasonings chai blend. This in my opinion is unfortunate because I find I like their blending despite being cheap ingredients which is normal for bagged teas. The taste is mild compared to most chai teas and has less of a cinnamon flavour. Despite most people on the internet claiming that Stash is a way better brand than celestial seasonings due to the quality of ingredients I would still recommend Celestial’s chai over Stash due to the choice of ingredients, not the quality. Also it would seem that the honey vanilla white variety is a better choice than their plain chai since the vanilla and white tea better suites the mild chai blend.

I feel like I’m wasting a teabag, but I’m going to make this tea twice anyway: once clear, and once with milk. Just to play around with it a bit, and because my head is giving me a hard time and I’m hoping a bit of caffeine will help. (Sleep was not my friend last night, and now I’m sore somewhere between my upper neck and head. One of those nights. sigh)

Clear, it tastes… dry from the spices, and perhaps slightly oversteeped. This is definitely a chai that I think will hold up better with milk and sugar than it does without. With milk and sugar, it doesn’t really hit the perfect spot, but it does taste more chai-y at least. Good, but not great.

This isn’t the worst thing I’ve ever tasted, but it’s bad enough I couldn’t even finish the cup, never mind the box.

I was initially disappointed when I tried this tea. I didn’t like the flavor very much, and it doesn’t taste like the homemade chai my Indian friends make. Oddly after a few days of drinking it, it started to grow on me and now I’ve been drinking it almost every day :) I add 1/4 cup whole milk and sweeten it with sugar, so it’s pretty dessert-like and yummy! It reminds me of pumpkin pie. Factoring in the price and convenience, it’s something I plan on buying again.