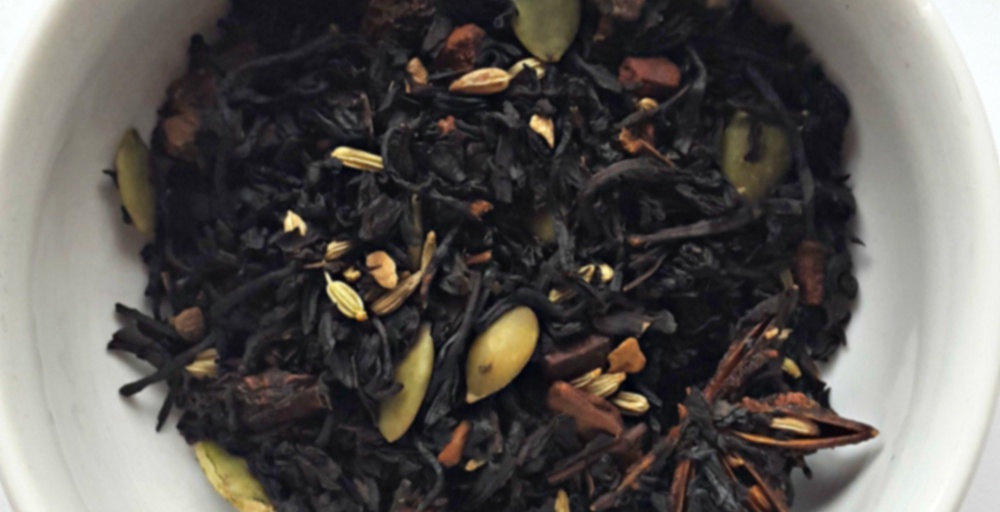 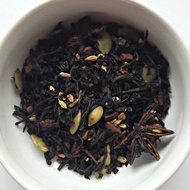 Nothing screams fall more than pumpkin and maple, so we’ve brought the two flavors together with a blend of chai spices to make a cup to start your fall off right. The chai relies on flavorful licorice notes of fennel and star anise, and the spice of cardamom, ginger and cinnamon to make a warming cup that is only complimented by the sweetness of maple and the smoothness of pumpkin.

For the best possible cup of chai, brew directly in milk and add maple syrup or sugar to taste.

Thank you to VariaTea for sharing a sample of this one. :)

2 tsp leaf, 500 mL boiling water. I added 1 tsp agave syrup + a touch of milk but found it needed quite a while to steep strong enough to come through the milk. The base tastes like an Assam and Chinese black blend. I can taste the fennel, cardamom, cinnamon, and clove. I would have liked more maple syrup flavour, but this is still very tasty. Our family recipe for pumpkin pie uses nutmeg/clove/allspice/cinnamon/mace, with the predominant flavour being clove and nutmeg. I don’t think this tastes like pumpkin pie/pumpkin spice without the nutmeg. It does make a great chai latte for an early morning, though.

And now I must have this!! dang you Arby…

hmm maybe not. I recall the package being in the same writing as the rest of the ones you sent me, but I could definitely have been mistaken.

Sipdown! I tricked out the last of my sample with a generous dose of rice milk and some DavidsTea Pumpkin Agave. The result was a gloriously maple, cinnamon, pumpkin, lightly clove, creamy, sweet brew. This is a really great fall tea for rainy days. I know because it started raining as I was sipping this tea and the combination was delightful. Take that with a grain of salt, though – I only like the rain when I don’t have to go outside in it.

Its my mothers birthday, and her favorite thing in all the world is pumpkin. So, in her honor, I drink a pumpkin tea!
Why did I think I’d had this one? Did I once have this once? Anyway, it wasn’t logged, so lets go with no, I haven’t and do my initial impressions instead.
It may be me, and my steep time, but I found this both very heavy, and somewhat bitter this morning. There is a very strong spice flavor, but I can’t say I get pumpkin, though there is a touch of what might be maple floating around. It only darkens the flavor, though. I was hoping the sweetness would make it brighter.
I’ve got enough for another cup, so I can try and see if it was my steep time, or what.

I wanted to adore this tea, because I really like what I’ve had of A Quarter to Tea so far, but alas. I think I might be getting maple, but that fall pumpkin spice feeling isn’t setting in. It’s mostly just cinnamon. Lots of cinnamon.

I feel like this is chai that would be served in a dungeon. Like, something to comfort an old-school Protestant who refuses to convert to Catholicism (or vice versa!).

I can imagine a guard whispering, “Here you go, you profoundly stubborn darling. I hope you enjoy this final cuppa. You’re getting beheaded tomorrow.”

The old-timey bedraggled prisoner would snarl his grubby hands around the mug. He’d whisper “thanks” in an ill-used voice.

Then he would smile a mostly-toothless they-didn’t-brush-back-then smile. It would be his final smile before the executioner’s axe.

I’m sorry you didn’t love it, but I have to say that having just finished watching The Tudors on Netflix (finally!), this review is amazing to me!

Lauren, I did like it, though! My favorite of yours is that coconut carrot cashew. I want to try some more, too. Whenever I make my way through this stash of samples/trades, I’m coming to visit you and grab a few more ounces of that and a sampler pack. I’m still trying to figure out what I love. BUT I KNOW THE CARROT CASHEW IS ONE THING ON MY LIST.

Were you heartbroken when Anne Boelyn died, too? The show was’t the same without her.

Glad to hear it! :) I have a few more coconut flavors I’m working in right now, so those might be of interest when you make you’re order as well.

And yes! Natalie Dormer completely brought Anne Boelyn to life! Season 2 was easily the best to me because of her.

I only like coconut in the context of tea. Its weird plasticky texture is off-putting on top of a cake. I look forward to your offerings!

Maple Pumpkin chai, yes please. There is a delightful aroma of spices wafting from the opened bag, and it’s always exciting to see whole star anise in there. And pumpkin seeds too!

This makes a pretty good chai. I like that the anise and fennel are in the foreground, followed by the ginger. I don’t get any pumpkin or maple, however. I’m guessing that the spices are overpowering these more delicate notes.

Dry leaf smells super awesome. Maple syrup and pumpkin. Chai comes out more in smell of wet leaf. I don’t think I used enough water the first steep. I only used about 6oz. With 8oz, the 2nd steep was much better. Like TeaTiff I find that 2tsp and 8oz to be the correct ratio.
I was able to get three steeps out of the leaves though the 3rd steep was definitely the weakest. In the 3rd steep, I lost the maple but got pumpkin chai.
When I’m ready to reorder, I’ll need to get some more. The taste is true to the smell of the tea.

I think AQ2T does maple really well (as in Syrupy Pumpkin Pancakes OMG), so I had to order this one. It’s a giant snuggie of yum. Super flavorful, maple and pumpkin. I don’t always like chai and I don’t really know why, but I am loving this one.

I was sold at “snuggie”. Sounds wonderful!

Additional notes: Sipdown on this rainy autumn day! I love autumn except for the dreading of winter that it brings. It’s chai weather! This one is nice, but I mostly get a fennel/licorice flavor… but this blend is older now.

I’d love to hear what anyone thinks is the pumpkiniest tea? And I don’t mean the spices. I mean the actual pumpkin flavor. The tea with the most pumpkin flavor? To me, it’s Bluebird’s Pumpkin chai, even if it technically uses carrots instead of pumpkin pieces. But that’s sad! There should be more pumpkin teas!

You need to stop raving about Bluebird’s brilliant concoctions because I’m trying NOT to make an order haha.

Haha. :D But they are worth it! I definite love suggesting them whenever I can.

Spiced pumpkin from DAVIDs TEA. It actually has pumpkin in it

Oooo.. I didn’t know about Spiced Pumpkin yet.

Oh yeah, Spiced Pumpkin IS a good one.

Oh what a wonderful cup for the morning. This is some serious yum! I think Mazi said it, I am turning into a fan girl. I am already plotting the next purchase, b/c I mean who could pass up a sweet potato pie keemun? I am drinking this tea straight, which if I had my drothers I would be adding milk and sugar to chai, but those are off limits for now. Just straight it a decent chai. I get some spice, who the heck knows what kind, plus some maple for sweetness. I am not really able to pick out pumpkin in this one, but it is still delicious. The base works for me on this one. Not too strong and not too weak.

EDIT: As it cools I definately was able to pick up more of the pumpkin spice flavor. Also, I am finding 2 tsp for about 8oz of water is the sweet spot for these.

Yours I Like This
12 likes
6 comments
Edit
keychange
Delete

You are tempting me!

I am not sure what shipping is for you, but he sample pack is pretty fun.

I’m not sure, either. A few other Canadians have given it a go though, so I can’t imagine it’s too ghastly.

I ordered 4oz and it was 7.00 so it looks like there is not much difference between US and Canada shipping.