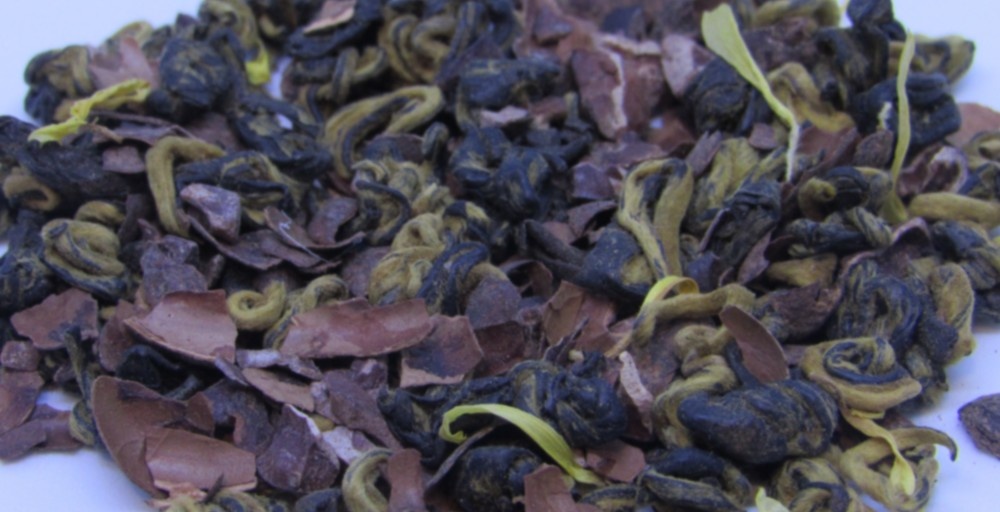 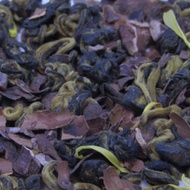 This year, we decided to go back to what we love most: TEA! I mean, that’s why you subscribe, right? To get your hands on these teas!

So for our Fourth anniversary, we crafted a special tea that we call DECADENCE! It’s a black tea using Golden Bi Luo Chun Black Tea grown in the Yunnan Province. We added some caramel essence and just a hint of cream essence – and then we added some cacao shells & nibs to create a truly decadent dessert tea. (And it is OH so good!)

This tea is absolutely DECADENT and I love it! The tea starts out with a strong chocolate-y note – followed by hints of caramel and cream in the background. It’s a dark chocolate kind of flavor . . . but if you prefer a milkier kind of chocolate, feel free to go latte with your cuppa! In addition to being decadent, rich and delicious – it’s also VEGAN, all natural, gluten-free & allergen-free!

PS: It wasn’t until after the teas had been shipped out to our subscribers that I recalled the 52Teas “Double Chocolate Decadence” tea (one of Frank’s blends). I hope the name of this tea won’t cause too much confusion.

Cracked open my second bag of this, and it was quite delicious. Super chocolatey and rich, with lots of flavour from the base as well. An adult hot chocolate, of sorts.

I turned this into a latte and put it in my thermos for this morning’s tea. I have had to restructure my sleeping schedule (which I have, to date, failed to do) because Amethyst needs me to help getting her son (my beautiful, sweet, adorable grandson!) to school (she has early morning classes). So, since I need to be awake for at least another couple of hours, I am hoping that this caffeine boost will help that (and hopefully won’t keep me awake much longer than that).

This makes a fabulous latte. It tastes great non-latte too – in fact, I have to admit that I do prefer it non-latte, but that’s become true of almost every single tea in the past few years (before I even took over the 52Teas thing). That said – it is really nice as a latte too.

I love this golden Bi Luo Chun – it has a natural chocolate-y note going on and hints of caramel too, so I knew that it would be the ideal base for this caramel-cream chocolate blend. And this blend makes a really nice, comforting cup that is also encouraging a wakefulness that I need at the moment.

Had this one last night on the way to a friends 50th in toronto – yes we drove to/from toronto just for one party with the little one. Funny thing is, every one loves a cute, happy kid at a party so she was well received and did great! I figure it’s not often we mess with her sleep schedule and if you’re going todo it, might as well do it on the time change :)

I love this one..reminds me a lot of what i used to do with LB + cocoa shells so it’s a good time for me. I’ll be picking up a little more..though i wish large bags were available :(

The dried leaves had an aroma of a yummy dark chocolate bar. One of the strongest I’ve ever smelled. I wondered if it would transfer to taste because so often the chocolate falls flat or gets lost. Well, at least with the ones I’ve tried. It didn’t. The dark chocolate notes were on the forefront, along with some milky/creamy notes. Not really bittersweet either but definitely not milk chocolate. The sweetness is of caramel not honey and unlike the stevia overload of some flavored teas, this was just right for me. I believe the sweetness is coming from the cacao nibs. Not sure. I don’t see stevia listed in the ingredients. The golden bi luo chun notes were there as well: Sweet potatoes, brown sugar, bread, malt. Super soft mouth feeling, nice aftertaste. Highly recommended. It is a very nice dessert tea.

I never put stevia in my teas. I hate the stuff.

That’s good to hear. I bought a tea once that had stevia in it and ended up with a three day stomach ache. I was so bloated. I thought it surely could not have been the tea, so I tried the tea again a week or two later. It was the tea, and stevia was the only ingredient I hadn’t had before.

I just have never really liked stevia. It doesn’t affect me adversely except that I’m adverse to the flavor of it – it has a really funky sweetness to it that doesn’t taste like sugar to me. The only real sweeteners I’ve ever had in teas are the occasional candy sprinkles (and really, they don’t add a lot of sweetness at all) or if I happen to use candied ginger (for things like gingerbread) or candy cane or something like that – and I have used candied pineapple once or twice – but it’s all usually what constitutes a very small amount of sugar in each cup – I am a strong believer that people should decide whether or not they want to sweeten their own cup!

I agree, 52teas! I just had a tea with monkfruit. I gave the rest away, it was weirdly funky.

stevia sucks so bad. the taste is just gross