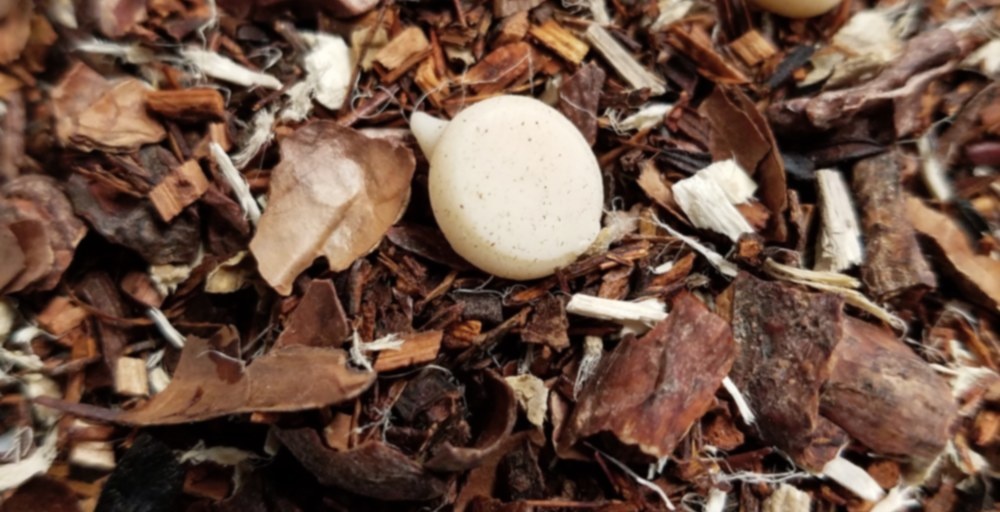 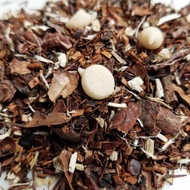 I have received quite a few requests to reblend my Rocky Road black tea – and I’ll eventually get to that, I promise – but I got to thinking that the flavors of Rocky Road might go nicely with a base of caffeine-free Honeybush and Rooibos. That sweet, naturally nutty taste of the two herbs would enhance the almond notes of such a blend. So I decided I’d try it.

I didn’t try to focus too much on the “ice cream” aspect of this, instead, I just went with the flavors of Rocky Road: Chocolate (cacao shells & nibs), Marshmallow (root) and Almond (nut-free essence). I also added a few white chocolate chips to add just a touch of creaminess to the cup (and they’re vegan, of course!)

This is really quite a tasty low-caffeine treat. I say “low-caffeine” because while the honeybush and rooibos do not have caffeine, there is probably some caffeine to the cacao nibs and shells. And while I’m no expert when it comes to caffeine, I don’t think the trace amounts that the nibs and shells would introduce to the cup are enough to keep you up at night – so I think this would make a really lovely ‘late-night’ sweet treat!

Fifteenth tea for March Mad(Hatter)ness! This is for the rooibos tea round, going against Lupicia’s Sakura Rooibos.

The dry leaf has a bit of a chocolate liquor/alcohol aroma, as well as some peppery and honeyish notes. Steeped one perfect teaspoon in 350ml 205F water grandpa-style.

The steeped tea smells of cocoa, of the dark, bittersweet variety, alcohol, pepper, and honeyed nuts. The flavor is a pleasant cocoa that does taste akin to a chocolate liquor, with a rich nuttiness that I’m assuming is coming from the rooibos/honeybush base. There is a honeyed sweetness and the pepper taste I often get from honeybush is very subtle here. The base is coming off slightly biscuity to me, and is quite pleasant. I’m getting the chocolate and the nuts, but not really anything to remind me of the marshmallow component of Rocky Road; it’s sweet, but I think I’d need a stronger cream sort of flavor to really get that element. Despite feeling that the blend could be pushed a little, it still made for a very satisfying and pleasant evening cuppa.

So I made this but when I leave my room I am wearing a mask and I was sitting with my family and thus not drinking this. Then I brought it up to my room but decided instead to shower. And then after the shower, my brother-in-law surprised me with ice cream. So basically a lot of time has passed and this is cold.

This tea is not great cold. I get nuttiness but also a lot of the rooibos and honeybush. While it’s not bad, I am not loving it. But its a liquid and its caffeine free so I am finishing the mug and sad that I wasted the sample from Sil since I know this tea is better than this. Oh well. And thank you Sil for sharing.

YAY! my small order from 52 teas arrived today – i feel slightly guilty because i really haven’t made any progress on my cupboard lately but i really needed a few more herbals in my cupboard. So i feel like some of the ones i picked up will be finished off before my other teas. I’ll need to do a better review of this one the next time i have it – this time it ended up being largely cold by the time i was able to get to it. However if you consider that even cold i enjoyed drinking it, i’m fairly certain it’s safe to say that this is a success for me. it’s got that marshmallow chocolate vibe going on – creamy and sweet, but not overly so. Thanks Anne!

You let your tea get cold… I just can’t look at your right now. :D

Honeybush and Rooibos are pretty forgiving though.

I definitely did not follow the directions that 52teas had for brewing this one. I used one heaping teaspoon. Not sure if that is around the 5 grams that they suggest. I also didn’t steep the first cup for eight minutes (only three). I’m definitely a fan of anything chocolate marshmallow! Usually, I can notice much more marshmallow in 52Teas blends. There is some here but maybe it blends in with the other creamy ingredients like these big ole white chocolate chips. Those definitely add an element that says ‘ice cream’. If I had to name this one just going by taste, I’d probably name it ‘Rocky Road’ too, so I guess the name is accurate. I’d probably never get bored with chocolate marshmallow teas anyway!