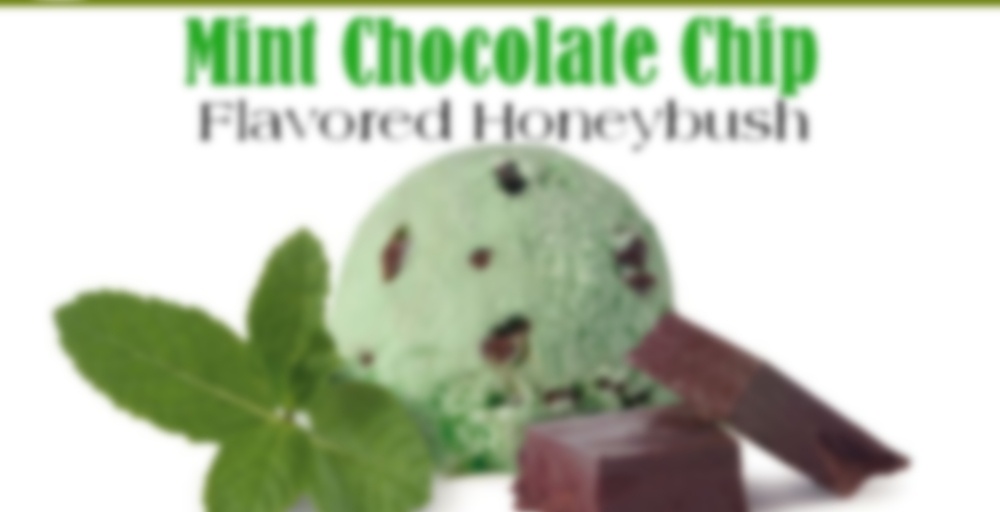 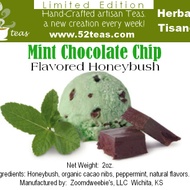 Our Tea of the week this week is a blend of sweet, caffeine-free African honeybush, rich, dark cacao nibs (organic ones, even) and fresh cut peppermint with natural flavors. Our honeybush blends are always popular. I expect this one is not going to be an exception, so don’t drag your feet, as always, this is a limited edition blend.

Tea for All Reasons 81

Thanks to Mercuryhime for this sample!

So, guys, it seems that either I’m developing a taste for mint, or Frank does something awesome with his minty blends that really works for me, because this tea is just as good as the Chocolate Mint Black (or whatever it was called) that I sampled a while back from Missy & Dylan. It’s minty, with maybe a touch of chocolate, and this characteristic 52teas malty, delicious flavour that I am adoring in the blends. I find it’s in many of them, which is fine by me as it’s good! I guess I didn’t taste the medicinal rooibos flavour, as I didn’t note it down.

Unmistakeable sign that I liked this tea? Checked the cup for more, and pouted when it was empty :D

ETA: Second infusion still has that characteristic flavour, with mint and even less chocolate. Still worthwhile, but I threw out the leaves after this one.

Have you had Fusion Tea Room’s Roasted Mocha Mint Mate? It’s OUT OF THIS WORLD and I’m usually not big on mint in tea.

No! I haven’t! That sounds potentially up my alley, given my love of roasted mate and apparent liking of mint in some blends like this. I have a bit of 52teas Vanilla Mint Mate from Missy and Dylan that I have yet to try, and have high hopes for it too.

This is nice, I also like soymilk in mine. :)

I can’t say I’ve ever added milk to a honeybush or rooibos before. I can see this one taking it though.

I quite I enjoy this as well! I also like DT’s Mint Chicolate Rooibos. I’ll probably replace this with that when I run out.

Mercuryhime – IIRC I actually didn’t much care for DT’s version. Maybe it’s the rooibos vs. honeybush? I actually had forgotten about it – should have tried tonight. But you sent me enough so I can make a second cup, so hopefully I’ll remember to compare the two then.

Well I think Franks blend is much better, but I gotta have my mint chocolate! :) I’ll be interested to see your comparison though!

52teas does have a very distinctive chocolate flavoring that I haven’t found anywhere else.

Drinking this with a big chocolate brownie for breakfast… Debating buying the Witching Hour blend, but it sounds pretty similar, and I still have a lot if this one left. Erring on the side of not spending money online, for once….

I bought that one… if you want a sample, maybe we could swap? I had wanted to try this one myself. :) PM me if interested.

I hope this tea is not a recipe for heartburn but I really wanted to try it!

My one complaint is that it smells kind of medicinal, both in the bag and in the cup. I think perhaps that’s the honeybush talking? Or the honeybush mixed with mint, it is a bit odd.

I steeped this up for my afternoon dessert drink. I’m getting a lot of mint in this cup and a bit of chocolate. The honeybush lends a nice sweetness to this blend. I’m not reminded as much of ice cream as I am of… graham crackers, I think. I did end up adding soymilk to mine to sort of “pump up” the creaminess factor.

As a dessert tea I liked this pretty well, though not quite as well as the cinnamon roll honeybush. I wish for a bit less peppermint here but it may be perfect for others. It does somehow seem much more decadent than it really is… Another nice blend from 52 Teas!

Does the chocolate give you the heartburn? It does to me sometimes. ://

Chocolate does, and so does peppermint!

I brewed a big mug of this to enjoy this evening. So yummy.

Tisane of the evening……

I need to get back to curtailing my evening snacking. Somehow, Frank’s honeybush blends always make it easier as they are the best out there. This one is very good. Light chocolate, something creamy, and of course mint. The honeybush base just adds sweetness with a slight woodsy flavor. I definitely prefer honeybush over rooibos.

I finally purchased some honeybush blends from 52teas because of that promo code. I had barely the restraint to stop myself as it is. The promo just broke through my self-control. hah! Now I DEFINITELY have more tea than I need. More so than before.

Mint chocolate has long been a favorite flavor combo of my, much to my husband’s dismay. He seems to think that mint is vile except in toothpaste. Weird guy. Lucky for me though because it’s the only flavor of chocolate I can leave around the house and take my time to savor without worrying that it’s going to be gone the moment I turn my back. :D

This tea definitely delivers on the promised flavor too! Peppermint and dark chocolate pairs wonderfully here. Both take on a prominent role, though the mint is easier to find. The chocolate’s darker flavor tried to meld with the honeybush, but doesn’t succeed. Like the Grasshopper honeybush, I sort hoped for a creamier mouthfeel. Maybe some added chocolate chips would have done the job. I am grateful that it wasn’t added though since it would only be extra weight when I can easily add my own chips to the brew. Next time… :)

I think I may try this as a latte at some point. It tastes great as it is though.

I was trying to resist it but I just gave in…buying 3 of course when I told myself just 2.

What promo code is this??

There was a 15% off a $15 purchase until the end of March so I’m afraid it’s over now. :( Sorry. Maybe there will be Easter sales coming up though!

Ugh! How did I miss this? I subscribe to their newsletter and everything!

The loose leaves smell great. I brewed this up for 8 minutes (which is one of the longer hot steeps I’ve done).
This has an interesting light note to it. The mint is cooling and makes the liquor feel very thin. I taste the chocolate. Actually the two flavors go really well together, giving me an ice cream type experience of mint chocolate chip.
There is something in here that I’m not sure is working so much for me. I think it might just be the choice of base. I don’t care for honeybush as much as rooibos to begin with, so this might just be my own bias, but I feel like the honeybush dominates the other flavors. I don’t really know what I would suggest instead, and I am enjoying this, my brain just wants to process this as “interesting” rather than “delicious!”.

thank you Amanda for including this in the small envelope sale! The steep color is a deep red – much more red than I usually see. I LOVE that this is dark chocolate! I would choose dark chocolate over any other chocolate every time. Smelling the cup, there is a syrupy scent. I can’t tell if that is from the honeybush or the added flavors. The mint is definitely prominent. The chocolate, not so much. I did see at least two pieces of chocolate go into my infuser. Maybe it wasn’t hot enough to melt them. I’ll try a second steep tomorrow. This is much like mint chocolate chip ice cream or peppermint patties!

A sample from KittyLovesTea! My first sip of this reminded me of 52Teas Neopolitan Honeybush, which I absolutely adored back when I had some pouts. I think it’s the chocolate/honeybush combination — especially as it’s done here. Somehow, it tastes wonderfully creamy and delicious, and it got me thinking of ice cream almost straightaway. The mint is fairly subtle, but well done. There’s not a hint of toothpaste about this, just the faint flavour and a cooling sensation. The combination is a wonderful one — creamy chocolate, refereshing mint. It would be great in summer, but I don’t think my sample will last that long! Many thanks to KittyLovesTea for sharing this one with me!