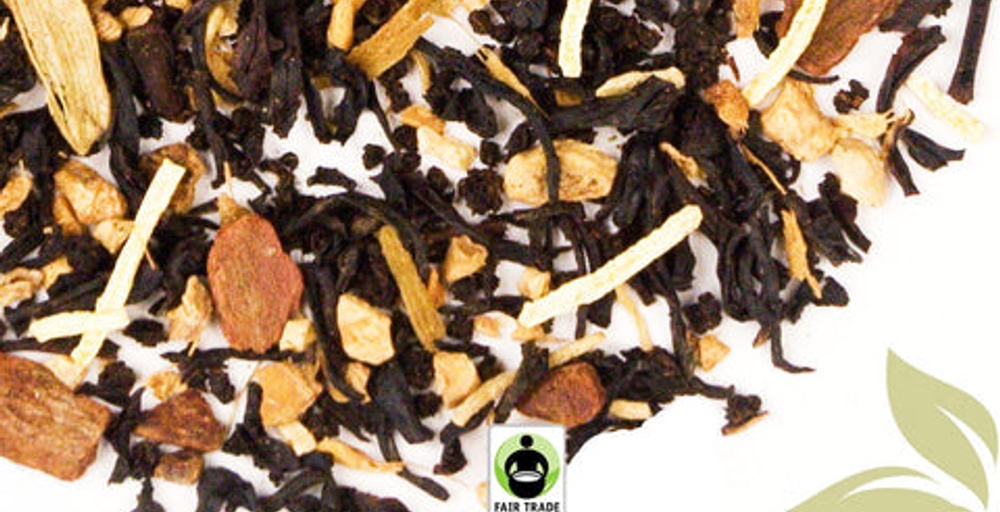 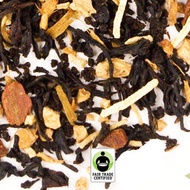 Accompanying this superb pairing is a medley cinnamon, ginger, and whole cardamom. Bursting with the essence of the tropics, this handcrafted blend will soothe, nourish, and uplift your spirits. Share a steaming mug with a good friend.

Again, this is very good – nice and sweet, but not overpowering, and you definitely taste the coconut – but it’s very mild for a chai.

A mild chai, you say? Did you add milk or drink it straight up?

Straight up. I made it once with milk before, and it was even milder.

Awesome. I’ve been on the look out for a mild chai… because with most of the chai’s I’ve had, it seems like they just throw a bunch of cloves at you and call it “spiced”… uh, no. I’ll have to look into this one. Thanks for posting the note.

Yes, it’s definitely good, just a bit mild for me. Zhi’s Kashmiri Chai is very similar, but with a green base and no coconut. I’d recommend them both.

Tavalon has a mild chai as well (I think it’s the vanilla that smooths it out) – the Kama Chai Sutra. I like a strong chai, so I didn’t rate it very high, but for a mild chai with the traditional spice blend it may be what you’re looking for. If you wait until Tavalon is featured in the Steepster Select, you can use the 20% off coupon, too!

I ordered some of this chai for a friend as a Christmas gift, so I decided that I needed to get some for myself too. It’s a yummy chai.

The Assam base is malty and rich. I like how the malty notes of the Assam meld with the creamy sweetness from the coconut. The coconut adds just the right creamy touch to this for me, I don’t need to add milk or cream to have a latte-ish type of chai experience with this chai.

This is not an overly spicy chai: sweet cinnamon, warm cardamom and a kick of ginger. It’s warm and cozy tasting, but not really spicy … but still very enjoyable.

I have been nursing a cup of this all morning. It’s about done and I’ll be resteeping soon. There is a nice creamy coconut base to this with some spices on top. I have had it for a while and the coconut hasn’t gone bad yet, which is nice. It is a little more like coconut with spice rather than a chai, but either way it is hitting the spot right now.

62
Not Recommended
Cameron B.
3320 tasting notes

I’m not sure what I was thinking when I ordered these samples from Zhi Tea, since I ended up with three coconut teas and it’s never a favorite flavor of mine…

This one smells a bit odd, I thought I was smelling stevia at first, and then changed my mind to licorice root. But neither of those things appear to be in this tea, so not sure what’s going on. It also tastes a bit odd. The base is coming off very earthy, when it’s apparently an Assam. Not sure what’s making it taste that way to me, maybe the ginger? The coconut is very light in comparison to the spices IMO. I mostly taste cinnamon, and it’s somewhere in between Red Hots and bark. I probably would have guessed clove as well, but there is none. Not really picking up on the cardamom either.

An odd experience, as it really doesn’t taste like I would expect from the ingredients list. I would probably swear up and down that this has licorice root in it if I didn’t know it doesn’t. Hmm.

Coconut is so seductive. I can see how you succumbed to its charms.

Clearly this was a retail therapy moment, LOL!

Thank you for this one, TheLastDodo! This looks like a really nice blend, lots of big spices. But it turns out it makes the black tea on the weaker side. Not a strong chai! The brew is such a light brown. I’d say somehow the coconut is the most prominent, though I don’t see big coconut pieces. It seems more like an added flavoring than flavor from coconut. But that just means the blend will last longer. The coconut is sweet and tasty. I’ll have to add more than a heaping teaspoon next time though, in order to get a caffeine kick.
Steep #1 // few minutes after boiling // 4 minute steep
Steep #2 // filled half the mug // just boiled // 4 min

Notes: Ahhh, Coconut Chai. This has become one of my daily drinkers. It has one of my favorite two flavors ever, coconut and chai. The coconut is rich and toasty, and complements the spices well. As the for the chai parts in this blend, it’s a mellower chai and the cinnamon is the forefront. The ginger and the cardamom are there, just in the background. I love the shit out of cardamom, but some blends I have had lately use a heavy hand with that spice that adds a sickly rose-spice essence to the blend that I do not like. Fortunately for this tea, it was not the case. The combination of these flavors is a match made in heaven for me. The malty black base is also divine. It grounds the spices and the coconut and brings a fullness to the blend that makes it great for a cold morning, or even in a hot afternoon.

Today I brewed this tea in my western-style teapot and took it with me in my oldest thermos. No sugar, no milk. But I bet this would be great with some coconut milk :D