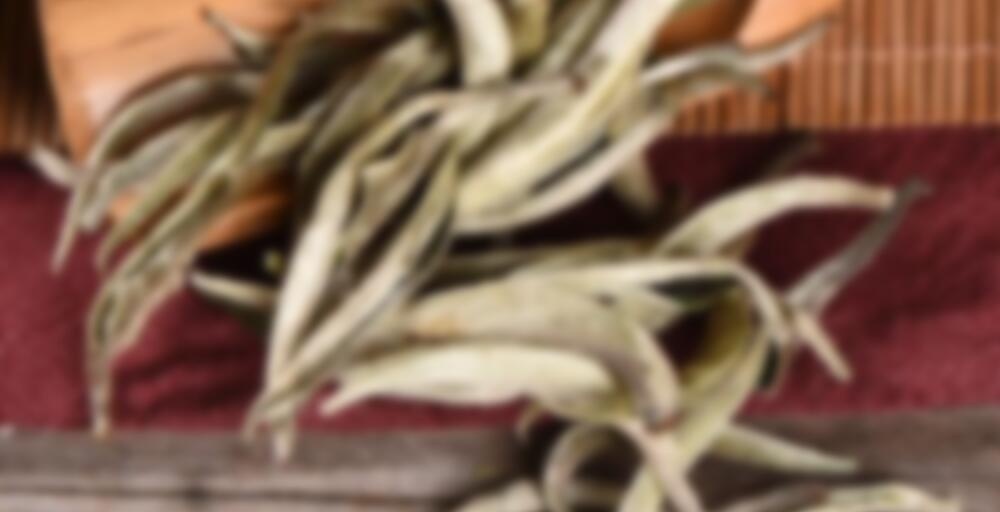 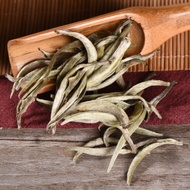 Slight cinnamon spice aroma when brewed. Thick and sweet. Very lubricating mouth-feel that stays in the mouth after drinking.

Brewing tip: Use 90c water and keep infusion times short for the first 3 to 4 infusions. Can be infused 7 or 8 times!

Since I just finished reviewing What-Cha’s China Yunnan Silver Needle White Tea, I figured I may as well go ahead and review the tea to which I directly compared it. Even though both teas were presumably identical, I ended up liking this one slightly more. As noted in my review of the other tea, I think that was a result of me naturally preferring Yunnan white teas that are brewed at a lower water temperature.

Prior to the rinse, the dry leaf buds emitted aromas of hay, straw, and eucalyptus. After the rinse, I noted new aromas of marshmallow, wood, lemon, malt, and sugarcane. The first infusion saw the nose turn a little woodier and something of an indistinct nuttiness emerge. In the mouth, the tea liquor offered notes of cream, wood, hay, straw, malt, eucalyptus, and marshmallow backed by a hint of sugarcane. Subsequent infusions saw the nose turn creamy, buttery, and a little spicier. Interestingly, the nose became noticeably fruitier too, as I detected pronounced aromas of honeydew and lychee. The aroma of vanilla that I noted so early in my review session of What-Cha’s Yunnan Silver Needle also appeared around this time. New notes of minerals, butter, cinnamon, honeydew, oats, peanut, cantaloupe, apricot, lychee, and lemon appeared in the mouth. A soft, subtle maple candy note was just barely detectable on the finish of several of the middle infusions. The final few infusions presented lingering notes of minerals, sugarcane, oats, cream, and eucalyptus backed by nigh ghostly hints of lychee, wood, straw, and honeydew, though bitterness and astringency took over on the finish.

Okay, the lower water temperature that I employed during this session clearly brought out different notes compared to the higher temperature I used for the What-Cha tea. I also noted that several shared components came out at different points, also likely due to the difference in water temperature. Compared to my treatment of the What-Cha tea, the preparation method I used here generated a softer, sweeter, fruitier tea liquor with less woodiness, nuttiness, and herbal character, and while I was able to stretch this session out more, there was a bitterness and astringency present in the final couple of infusions that I found somewhat distracting. Again, if I had to pick between the two, I would go with this tea as well as the preparation I used for it, though I do not know how the What-Cha tea would have reacted to the same temperature and an identical brewing method. It was clear to me that these were more or less identical teas, so I’m guessing that the results would have been pretty much the same for me.

I really enjoy white teas but I don’t have much to say about this particular one, I find it too light for my taste and lacking in complexity.

Very light tea, both in texture and flavor. It’s pretty smooth and delicate, with more fruit and sweetness in the aftertaste than the actual sip. It’s a very friendly drinker, but not terribly complex or nuanced? I think I could have pushed the temps and steeping times harder though.