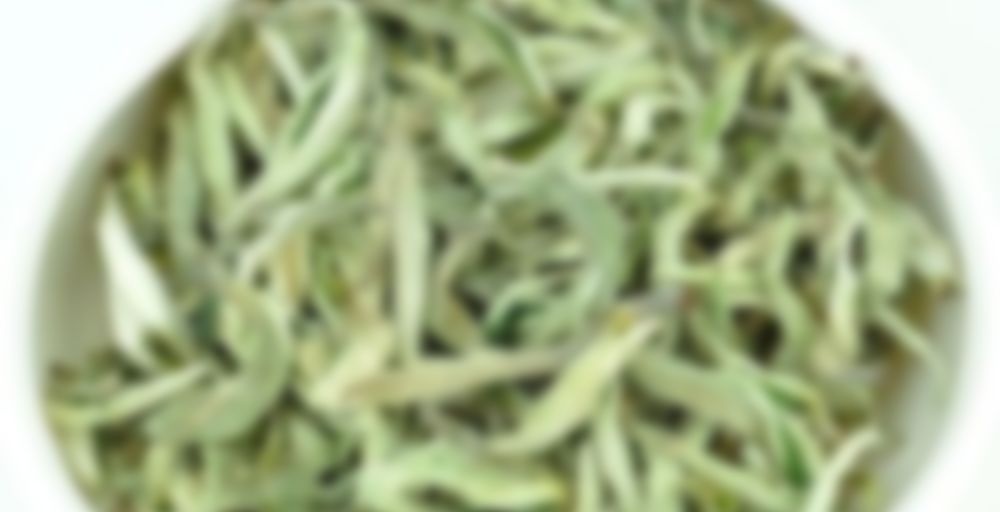 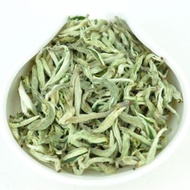 An exquisite white tea made entirely from newly sprouted buds. A special varietal of tea grown in Mojiang county of Simao. This tea is picked twice yearly in spring and autumn for just a three day period during which the buds are consistent in length and appearance. They are a beautiful bright green color when brewed. The taste is malty with hints of fruit and cane sugar.

Here is another recent sipdown of mine. I think I finished what I had of this tea back around the start of the week. At this point, I have to state that my continued exploration of Yunnan Sourcing’s white teas has been very rewarding. Though I have not had a tremendous number of them, I have greatly enjoyed each of the ones I have tried. This one was certainly no exception.

I prepared this tea gongfu style. After a brief rinse, I steeped 6 grams of loose tea buds in 4 ounces of 176 F water for 10 seconds. Again, I tend to favor these teas when they are brewed at lower temperatures. The first infusion was chased by 15 additional infusions. Steep times for these infusions were as follows: 12 seconds, 16 seconds, 20 seconds, 25 seconds, 30 seconds, 40 seconds, 50 seconds, 1 minute, 1 minute 15 seconds, 1 minute 30 seconds, 2 minutes, 3 minutes, 5 minutes, 7 minutes, and 10 minutes.

Prior to the rinse, the dry tea buds emitted fairly pronounced aromas of hay, eucalyptus, sugarcane, and marshmallow. After the rinse, I found new aromas of cream, butter, vanilla, sweet corn. The first infusion then introduced some nutty hints and some impressions reminiscent of birch bark to the nose. In the mouth, the tea liquor presented extremely light notes of hay, cream, butter, vanilla, marshmallow, and sugarcane chased by equally subtle oat notes. Subsequent infusions brought out aromas of oatmeal, malt, straw, and melon. A stronger oat presence was easily detectable in the mouth, and new flavors of malt, straw, honeydew, watermelon rind, pear, minerals, lychee, and plum appeared alongside some fainter impressions of grass and menthol. Oddly, I did not pick up any nuttiness in the mouth, though notes of sweet corn and birch bark did belatedly appear in some of the middle infusions. The final infusions emphasized lingering notes of minerals, eucalyptus, hay, and sugarcane which were balanced by hints of sweet corn, watermelon rind, birch bark, and straw.

Yet another interesting and satisfying white tea from Yunnan Sourcing, I was particularly impressed by this tea’s fruity, sugary sweetness and the interesting herbal impressions it presented. Subtler and more delicate than some of the other Yunnan white teas I have run across, this was a great tea for a long, slow afternoon gongfu session. Check this one out if you are a fan of sweeter, fruitier white teas.

As other have said the leaves are beautiful, before and after steeping.

After the first steep I used slightly hotter water. The soup was clear and delicate with sweet vegetal notes. Refreshing.

I can’t believe I never got around to reviewing this, because I was enjoying it quite frequently this spring. This one steeped up almost clear and tasted lightly of hay with a long-lasting sweet cream aftertaste a few months ago closer to when it was harvested. I got mineral and umami notes in the aroma, with some vegetal green tea-like notes eventually evolving and some pretty distinct body feels a couple of steeps in.

Now that a few months have passed I definitely need to give it another try to see if it has changed at all.

Dried leaves are delicate and smell like powderty white flowers and cucumber plants.
This smell is the peak of this tea to me. Dreaming of a cool spring wanderlust in misty mountains.

There is definetly a melon rind-cucmber freshness.

it opens up to an oily steep with toasted aromas, low bitterness but a dry finish of chalk/rock. From this point occasional notes of hay and sugar are welcomed.
Overall i thought it was boring.

A very mild and friendly tea with beautiful leaves! http://imgur.com/69ZAMpp

Unfortunately I think it got a bit heat damaged by the squelching Florida summer. The first few steeps have sort of a greasy potato chip aroma that I’ve noted before in teas that I got during the summer.

Still, this is a nice tea. Very mild with slight grassy, melon, and sugarcane notes on a mineral background. This is a much lighter brew than I normally like, but it’s nice for a change.

Aromas of dry hay, slightly floral, butter, malt, vegetal, broth, wet stone. This tea keeps it’s aroma close to the leaf, as the liquor itself has only the very faintest floral quality.

This faintness carries into the flavor, which starts very inoffensive and in some ways not even present at first, but the aftertaste unfolds delightfully with floral and malt notes, and a strong suggestion of pear, with very little astringency and no bitterness at all. Later steepings bring more toast or malt flavors into the initial taste, and that long aftertaste continues to evolve as a more sugary flavor as the pear fades.

A very nice tea, possibly could stand to brew a little bit hotter next time.