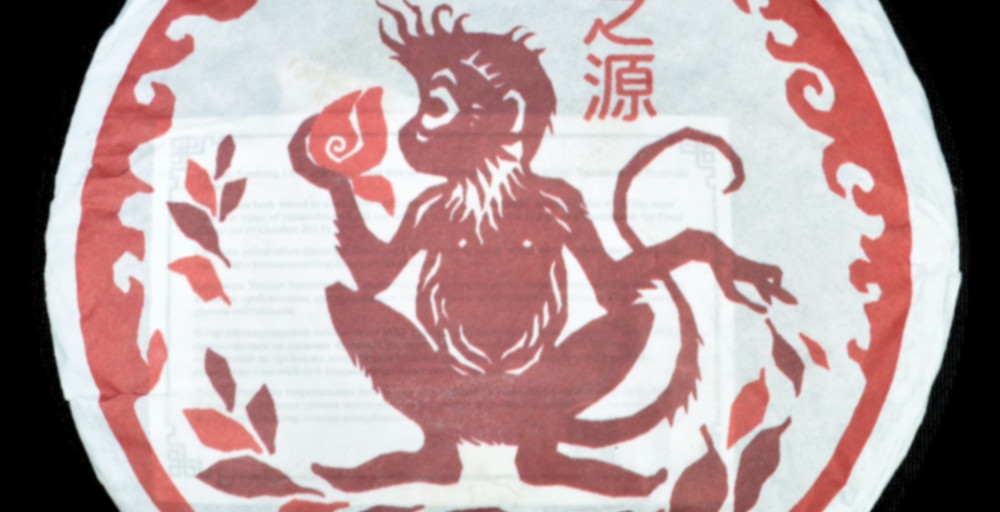 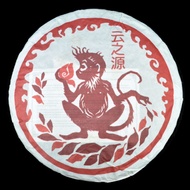 Entirely 2015 wet piled ripe pu-erh grown in a un-managed, pesticide free tea garden in Yong De area. This is from the same growing area as our “Green Miracle” cake from 2015. The wet piling was also over-seen by the same tea master as our 2015 production.

We call this tea cake “Immortal Monkey” as the scene on the wrapper loosely follow’s Sun Wu Kong’s journey to the Heavenly Kingdom to steal a peach of immortality from the orchard there. The wrapper depicts the exact moment that Sun Wu Kong has taken the peach and ponders his soon to be achieved immortality. We hope that this tea will bring you good health and that you will commune with your immortal essence while enjoying it!

The taste is thick, sweet, bitter and creamy. Being a new ripe pu-erh tea it will change and improve dramatically in the upcoming months and years!

The color of the first infusion was still light. The texture reflected this and was fairly light as well. The tea wasn’t quite bitter nor chocolatey, but bittersweet might be an apt description. Despite the color, the strength was stronger than your average shu. The second steep didn’t actually brew much darker. The texture was very light, which you could tell already by just looking at the liquor. The taste was a bit stronger, consisting of darker tones and being at the edge of bitterness. Bittersweet might still be applicable here. The lasting flavor left in your mouth was however clearly that of coffee.

The third steep finally brewed a bit darker, although hardly very dark for a shu pu’er, more like a hong cha. The tea was strong, but light, if that makes any sense. The initial burst of dark, bitter coffee flavors was fairly strong, but the texture was disappointingly light and the flavors faded quickly, leaving behind this sort of void. It just left you with this sense of there being a lack of substance. There was however at least a persistent lingering aftertaste. I also noted that the tea became very bitter once it cooled down.

Slightly extended brewing time finally produced a slightly better body in the fourth steep, although the texture was till light+. The taste was bitter, maybe even a tad sour (but not in a bad way), now leaning more toward woody notes. This was a decent brew. The body didn’t hold up in the next steeping. The flavor had dropped as well. This with me extending the brewing time by 50% from the previous steep. The taste was perhaps slightly sweet and mineraly with some light woody tones. Very disappointing.

The sixth steep I apparently managed to push adequately as the strength was back to a decent level. The taste was mineral, with some darker woody notes as well. The tea had a certain freshness to it, being almost cooling. There were some nice lingering woody tones as well. This was a decent steep. Steep seven was light in texture, but had a nice mouthfeel. I’m not quite sure how to describe it, but it was tasty. It was refreshingly woody with a bit of mouth cooling going on. A nice infusion.

Steep number eight was the last one I did. It was light, simple. Drinkable, but the tea could have very well been on the verge of either giving up entirely or becoming nasty. There was some of your typical base sweetness, but I deemed the tea done in my eyes.

This tea was decent. I’m fairly picky when it comes to shu pu’er, so I wasn’t expecting too much. I found the tea to brew stronger than your average ripe, while the body was generally quite lacking. If you like your ripes thick, I’m not quite sure how to achieve that with this tea without making it excessively strong in the process. If you are wondering how Immortal Monkey compares to Green Miracle, I haven’t had that tea recently enough to make a good comparison, but I recall Green Miracle being perhaps a bit more dynamic in terms of flavor, although the flavor profiles are comparable. At least right now Immortal Monkey seems to lean more towards bittersweet and woody, while Green Miracle according to my memory was less bitter and perhaps more chocolatey and mineraly. These teas are still young, however, so they will continue to change over time. I don’t think I really have a preference for either tea right now. They are similar but different in their own right.

To boil things down, Immortal Monkey seems like a decent tea to drink now, with the potential to become a better tea in the future. Those leaning toward a bittersweet woody profile when it comes to shu may find this to their liking. Those seeking a replacement for Green Miracle should not be too disappointed either. While the tea is not distinctly sweet, the lack of sweetness does not come off as a negative like it can with some other teas.

I got a sample of this tea from a friend. I tasted it with a cupping method using 5g of tea leaves for 1dl boiling water and steeping for at least 5min, leaving the leaves in the liquid to continue steeping throughout the tasting.

Dry leaves: Compressed, easy to separate. Colour varies from dark brown/blackish to reddish golden in a ration of about 60:40 against the golden tips. The material seems to be small, no big leaves. The dry leaves smell a little fishy and earthy with a hint of sourness. The smell is smooth, not stinging or unpleasant.

Warm leaves: The smell turned more earthy with warm leaves in the cup, with a hint of honey. Surpisingly I couldn‘t discern the fishy smell anymore and it seemed even milder than with the dry leaves.

Wet leaves: he earthy smell was stable compared to the warm leaves with a hint of tobacco and wet clothes. It was very mild. New in the wet leaves was a smell of wet ashes and charcoal.

Liquid: the colour of the liquid was clear and dark brown with a reddish hue. It didn‘t become much darker after 5 min of steeping. The smell on my tasting porcelain spoon was light and of wet earth, only a little sweetness and the wet ashes smell continued, on the front of the nose was the sour smell of tobacco. When the spoon cools down a fishy smell reappears accompanied by wet wood and rotten leaves. The taste was a little bitter on the sides and cheeks as well as earthy and a little sour taste of leather and tobacco. It reminded me of old dusty wood getting soaked or decomposing tree trunks. There was a soft mouthfeel and it was smooth with an oily consistency. There was just a little stinging sensation to my cheeks. Something that I didn‘t like was that I had the feeling of the tea sticking to the back of my palate like mucous.

spent tea leaves: homogenic dark brown colour, not as much difference as in the beginning with the dry leaves. The leaves were very soft and mushy such that they decay when zou touch them. The leaves were very small, in the sample I had, none of the leaves were intact and there were some thin woody stems inside. The sour leather smell was sticking to the spent leaves and a smell of wet cardboard boxes. The spent leaves did‘t have much of a taste, they were easy to chew releasing a little more bitterness but nothing much besides that. The spent leaves also had the wet ashes and charcoal taste that stuck to my throat.

If you like shou pu‘er this tea definitely has a nice mouthfeel, the taste of shou is also good and I can recommend it. It has a taste of earth and a sourness reminiscient of tobacco, with a taste of wet piled leaves. What I did not like about this tea was the sticky sensation to my throat and palate.

I am fairly new to Puerh teas, and I’m not great at writing tasting notes, so take this as you will. This is an earthy, wet leafy tea. It is not too bitter, but it is strong. I don’t get fishy, but definitely a tea that tastes grounded and earthy.

As I’m still learning Puerhs, I don’t know if this is a good taste or not. It’s not one I am accustomed to yet. I’ll keep trying them and learning them.

I’m getting sharp, woody bark and autumn leaves. It’s very nice, but nothing special. Good for when you’re distracted or eating something else.

The first few steeps are insanely dark, but it begins to fade quickly.
https://www.youtube.com/watch?v=A6XJcTHupi4&feature=youtu.be steep 2

This tea doesn’t really last very long, however it is very tasty and changes a lot within the good 8 steeps. Very dark to mildly deep orange by the end of the session. Full on wild fermentation to semi dead fruit peel that has sat in the sink over some dirt that came off of the spinach I washed.

Pretty dang solid for a ripe and easily drank fresh as it is.

Immortal Monkey, may you live forever! There are many teas on steepster that have gotten rave reviews of 95 or higher and yet they do not stand up to the refinement and sophistication of this tea. With the active mouthfeel of raw, with the richness of ripe – and definite potential for future deliciousness, this tea outstrips the appeal of – let’s say – phatty cake – with it’s heft, smoke, leather and in your faceness – by a more subtle seductive, mysterious, come hither allure.
Taste and smell absolutely no “fishy-ness” or fermentation flavor what-so-ever. In style it reminds me of some of the 2012 smaller leaf lesser fermented Dayi cakes 0532 and 7632. Granted, I reviewed the 7632 with some sketicism, having fallen in love with the brown sugary deliciousness of 2012 Yongde Blue. But my palette has come to appreciate more subtle brews that defy description – where you really can’t define what exactly is so wonderful – while knowing they are. This kind of tea pulls you into the meditative realm where flavor, sensation and mystery meet.

This is pretty good for a newly made ripe puerh tea. It had quite a bit of fermentation flavor. That flavor was still a bit funky if not quite fishy. It was not bitter. It developed a nice sweet note. I would venture to say it had some notes of chocolate in there. Maybe a bit of a woody mushroom taste too. This was a nice puerh. I bought two cakes of this so I will be seeing how this one ages.