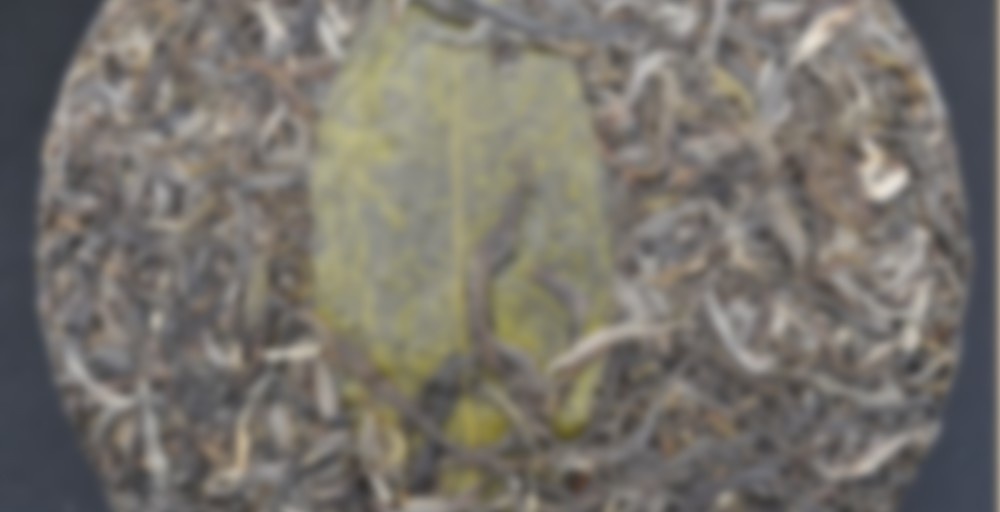 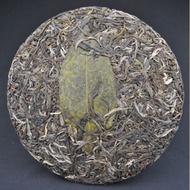 Da Xue Shan aka “Big Snow Mountain” is a high altitude area and perfect for growing tea. The neighboring “Da Xue Shan Reserve” is home to some of the oldest tea trees in Yunnan as well as Yunnan’s own Black snub-nosed monkey.

The tea cake is pressed with a large mature leaf on the front of the cake (instead of a neifei) and is wrapped in a white wrapper. The cake is medium level of compression made by traditional stone press. The tea is very strong in taste and aroma. It is both bitter and astringent with a lasting huigan and somewhat over-powering cha qi.

Had this generously sent to me by Liquid Proust in his intro to pu’erh package. I think I have messed up a fair amount of the raws I’ve had from that set, but I finally got a scale and this one came out really well! Sweet, a hint of bitterness, drying but not necessarily astringent, and very very long lasting. I got a nice energy from this tea as well! Really solid experience, I’m looking forward to trying more raw pu’erh with actual control over how much tea is in my gaiwan :^)

After reading others’ reviews, I think I might have increased my steep times too quickly – something I need to work on. I seem to do that with a lot of my sessions. I got this sample as part of a Liquid Proust puerh box. I used all 6.3g in my 100mL gaiwan.

I found the aroma from the leaves to be a tobacco-y with almost a hint of something citric as well. Flavor in the early steeps was a light grassy or hay with a thick and creamy texture – the texture is definitely one of the highlights of this tea. I mostly got a dry hay/straw/grass flavor with increasing bitterness followed by a nice and sweet honey-tasting huigan. A pretty good tea, but not one that I need to buy a cake of.

Update 2: After god knows how many steeps, this tea is starting to fade. I’m now getting my beloved apricot notes, although the butter flavor seems to have disappeared. Funny how flavors can kind of poke their heads up for a steep or two and then just disappear. Astringency has remained high although bitterness is fading. The vice on my head is also loosening. It’s been an interesting afternoon for sure.

Update: Jesus Christ, I’m on steep like 18 and the tea is still strong as ever. The qi on this stuff is insane. Starting to wonder if the leaves are laced with cocaine or something… Anyway, taste is getting better, more mild and with some buttery flavors creeping in. I’m gonna keep steeping—I’m determined to finish these leaves, even if it puts me in a coma.

Original Review: Got a sample of this from LiquidProust (so many samples! so generous!). I picked this tea to brew up because it has some absolutely gorgeous maocha—long, unbroken, fluffy leaves with a deep green color. The smell out of the bag was also really nice. Apricots and grass.

So it’s safe to say I started brewing this up with high expectations. Did it deliver? Er, well…

See it’s not bad. It’s just really not my thing. It’s pretty bitter and strong, with a little sweetness here and there. Very vegetal in early steeps. It sort of reminded me of drinking cheap-o green tea bags, which is something I get with really strong raw puerh. Could be I used too much leaf, I suppose.

Also side note—as I’m writing this the qi is hitting hard. It’s getting strangely hard to type, and my head is getting that floaty feeling…yikes.

All right, this is getting rambly but I take back what I said about cheap green tea—this tea doesn’t deserve that. It’s definitely getting sweeter, and less bitter. Maybe the last steeps will be softer…only time will tell.

Text of the review:

For a tea from relatively less mature trees, the aroma of the rinsed leaves is surprisingly sweet and thick. I can already smell the usual suspects for a tea from this region- honey, tobacco, and wildflowers. The first infusion yields a pale yellow tea soup. At the first couple sips, it feels perhaps a bit thin, but is textured and has real huigan (lingering sweetness and aftertaste). I find it to be grassy, with light honey suckle and sugar cane notes. The second infusion is a much darker yellow with a thicker flavor profile; there is an almost syrupy sweetness and some encroaching bitterness that I can tell is about to pick up… Otherwise the same grassy Lincang profile as the initial steep.

The third infusion brews a beautiful golden liquor. There is some bitterness indeed, but still not as much as I’d be anticipating… It is still sweet, dense and highlay enjoyable. Because of the relatively low price point and age of the tea trees, I keep looking for something to find wrong with this tea, but I’m still grasping. Perhaps there is a touch of dryness, but that could be from my own storage conditions. Of course, tea doesn’t have to be expensive to be good, just as it doesn’t have to be cheap to be bad.

The fourth infusion is bolder, with a heavier emphasis on tobacco and dark straw. Now the huigan is starting to feel a little thin, and a bit watery. At steeping five it might be petering out a little, which is fine at this price point. There is still sweetness and layered raw puer complexity, but it’s fading rapidly now into dry grey tones. Again though, this still gave four solidly enjoyable steepings which is more than can be said for other teas in this price range. My feeling is that Scott presses teas in this range as more “store now, drink later” types of affairs (e.g. San He Zhai, Mang Fei). The base material is fine, but not really enough for me to enjoy it as a young tea by itself. In five to ten years though I could see this being an enjoyable middle aged tea…

That said, it’s still going on steeping six… Plenty on sweetness, and retaining its Lincang flavor profile of wildflowers and honey. This bodes well for aging, it’s just not quite there as a young tea.

This is a great review, thanks

Well done! Made me want to have a session!

With that YS sale going on… it’s time to sip through these samples instead of enjoying the best tea out there; being oolong.

Brewed this one up not knowing what they heck it was, just saw 2015 and was like: time to find a ‘nope’ right away due to young astringency. Well, that didn’t work out the way I thought it would.
This brew up a nice medium color for a sheng and had quite a texture to it. Thick liquid which makes me happy, but to describe the taste…. you know that taste of dehydrated fruit that companies call ‘authentically sweet’ but it really taste like someone made a fruit looking object out of colored paper and put sugar from 2003 on it? Well, that’s the kind of sweetness or fruity taste this has; whatever you want to call it.

It’s pretty nice. I’m tempted to look at the price, but I committed to not looking at any prices until I do all the drinking I can do. So, for now, this gets a ‘I like you’ sticker added to it.