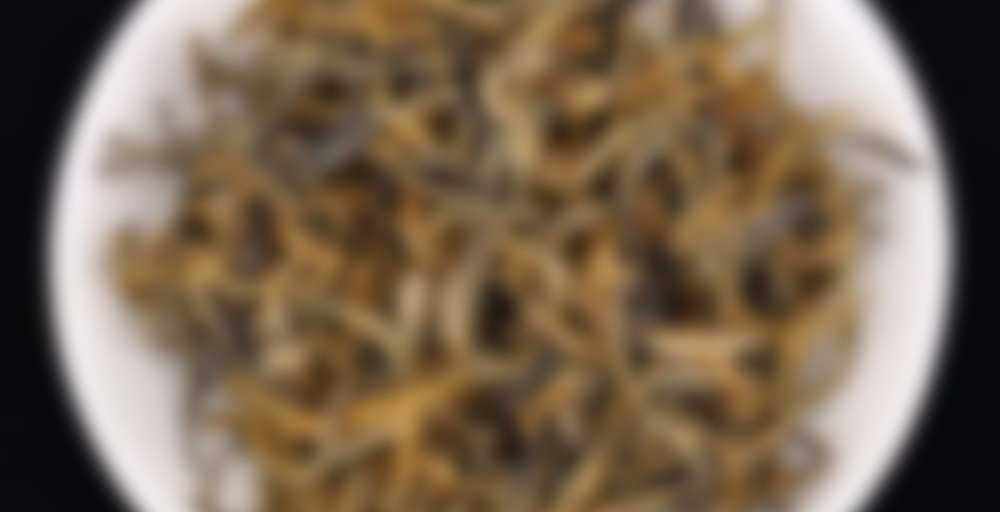 Terris sent me a bit of these to have – Spring 2015 (too lazy to create a new entry). This was a malty, super smooth delicious cup from this morning. I’m a fan of this one.

Smokiness much more prominent on tasting, especially the finish. quite lively. Round and polished, a textural treat.

Yeah…this one just tasted like wood to me. XD Kept trying to drink more of it in case there would be another flavor, but there just wasn’t for me. So I gave up.
Not for me.
Thank you for the sample though, Terri!

The leaves are a gorgeous blend of gold and brown which reminds me of a lions mane. They are thinly rolled and long, with some being curly. It has a sweet malt scent with gentle smoke and wood notes.

First Steep
45 seconds
The liquid is amber in colour with a sweet yet smoky malt scent.
Flavour is light with dark smoke, malt, wood and prune fruit tones.

Second Steep
1 minute 20 seconds
Richer and stronger, this steep with more smoke tones that lighten into a cream and malt finish that lingers. Fruit comes through in the after taste, specifically prune and fig.

Third Steep
2 minutes
Lighter but still with flavour. Malt and wood with soft leather and some dryness. The fruit is very subtle now.

Similar to the first steep, this is light and sweet with malt and smoke tones albeit subtle from what it once was.

This was a nice tea that offered a blend of gold tip and full leaf flavours. It was darker than I thought it would be given the high level of golden tips but still very pleasing. Not the best I’ve tried but still very nice.

I have noticed a trend with my tea drinking lately — I’m not drinking too many flavored teas. I should definitely consume the ones I have left but I haven’t been craving many. Sometimes they are nice as dessert teas but overall I might be done experimenting with them for a while.

It’s hard to go wrong with a decent unflavored tea from a reputable, quality source. But flavored teas seem to be a disappointment to me so much of the time. I think a good plan for me moving forward is to sip those down and just not be buying a lot more. Also will be helpful for paring down my tea collection. :)

So this is a tea i got with my YS dark club order and I am trying it this morning. True to the name it has a lot of lighter-colored golden tips. I tend to like these types of yunnan teas and this is no exception. It’s very smooth with notes of cocoa and malt. Cameron mentioned cucumber which seems appropriate to me, not so much with the flavor but in the exceptional clean and smooth mouth feel of it. This is probably the lightest yunnan black tea I have in my collection right now. Good as a breakfast tea but would also be good as an afternoon tea. I like it!

Another Yunnan Sourcing tea from a lovely tea friend! Visually, this tea looks different from the other pure bud teas. The leaves are large, but they’re not as fuzzy and there’s quite a bit of grey-brown mixed in with the expected golden color. Dry scent is fairly strong on the stonefruit notes and is almost tart.

In the steeped tea, I smell cucumber which is quite interesting. I also get a bit of cucumber in the taste and I find it nice and refreshing. There’s a bit of an earthy base underneath the flavor of cucumber and strong apricot notes. I think I overleafed this a bit, but considering it’s a Chinese black it’s not bitter at all. With a bit less leaf or possibly a slightly shorter steep, this would probably have a bit less earthiness and more lightness to it. Still yummy though!

Thank you 221Tea and Brian for the sample; sorry it took so long to get to!

Steeped this one up Western style; I thought it produced a very nice, smooth malty cup with some sweeter cocoa notes and some light handed earth notes. It was pleasant to sip on while I was getting ready to go out!

I ended up going out to work, on my day off, since we just hired four new people. I wanted to meet them on their “first day” when I was off the clock – and they wouldn’t yet know who I was or that I’m in a position of authority over them. That’s sorta the best way to form an impression of them. You can tell a lot about how someone is going to be based on the way they treat total strangers going through their checkout.

Do they smile? Make conversation? Do they seem confidant counting back change?

So it was a good afternoon out of the house. And they all seemed ok based on that one snap impression (which I have since expanded on working alongside and training them).

Michelle is my age and very fun and friendly; great people skills. She lacks a lot of work experience, but is trying very hard to learn and is catching on to things at a consistent pace. Ka Yan is the only one of the four who isn’t a cashier; she’s a fulltime stocker/aisle owner. She’s pretty quiet/shy but very kind and soft spoken when she does talk to you. She works very independently and doesn’t need much direction. Laura is absolutely the strongest worker/cashier of them all and catches on to new things the quickest of all of ‘em – but she’s not good with people at all and has a very brash/harsh demeanor. So we’re gonna have to work on that.

And then there’s Noah. Noah is also my age and they’re probably the one I’d most likely be friends with outside of work. We’re both pretty damn nerdy, Tumblr/fandom type people. This is their first job – so they have lots to learn but Noah’s definitely making an effort. I know they’re having the hardest time, out of all the new hires, connecting with other coworkers though – there’s NO ONE else “nerdy” or like them at work other than me – it’s the same thing I kinda had difficulties with (my at work BFF Bobbi has admitted to really disliking me at first because I was “weird”) but I kinda had an advantage since I was in more of a position of authority – and Bobbi had to spend time with me for our position and got to know me that way. I also had more confidence because I had previous work experience very similar to what I do now. And then, there’ the fact that Noah’s “real” name is Maryam, but they don’t identify that way and they’ve asked people to please refer to them as Noah. No one we work with other than myself has even the slightest clue how to broach that request and people feel a little unsure about what that even means. So currently I’m the only person doing it, even though I’ve tried to advocate on their behalf and explain why it’s important and respectful.

I’m hoping they’re stop being so ignorant the longer they work with Noah. But all in all, I’m rooting for them! I like Noah as a person, we get along great! They have some room for improvement as an employee – but they’re learning! Like Bobbi did with me, they’ll just have to first connect with other things to grow close as coworkers…

Like nearly every YS tea I’ve tried, it’s delicious! A pleasant thick mouth, nicely malty, creamy, sweet, & slightly savory at the same time. There is a chocolate sensation, but it doesn’t really taste chocolaty to me. I think the 2nd steep was just as good as the first!

Thank you Roswell Strange for sending this my way to help me with my new project of trying straight blacks. So far, Yunnan Sourcing has been a success as I have enjoyed this and the other I have tried. This one is malty and smooth with notes of rich chocolate and sweet vanilla. There is also a bit of smoke and some earthiness for a complex but very pleasant cup. Very, very nice :)

Thank you Dexter. I look forward to it.

This tea came across too malty for me, to the point of distraction. I varied steep times and sugar/milk combinations but ultimately it didn’t work for me.