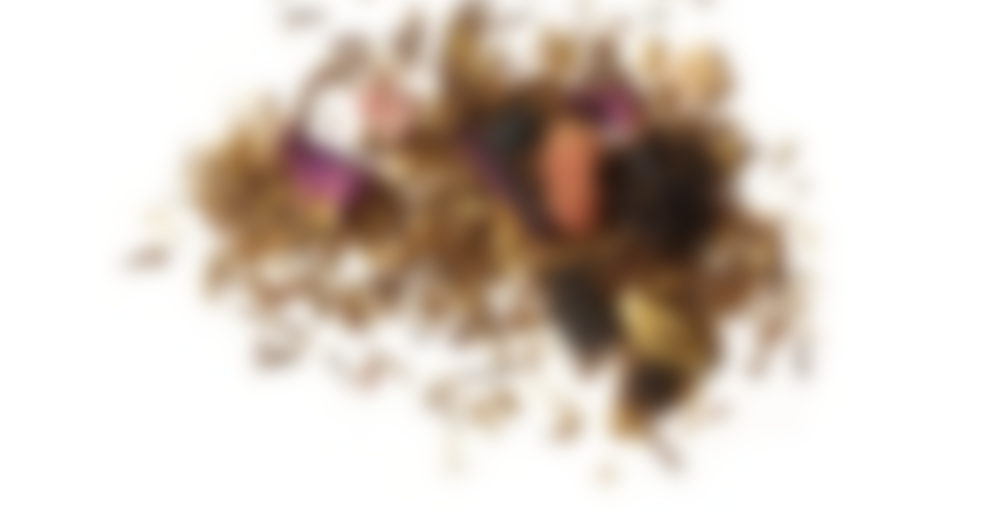 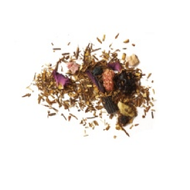 I couldn’t remember whether I’d logged this as a cold brew, but it looks like I haven’t. I’ve had a pitcher of this in the fridge ever since I had my first success cold brewing Yumchaa Lemon Sherbet. That made me keen to try some of my other rooibos teas cold, and this was the one I chose. I’ve been kind of addicted to it ever since, because the berry flavouring comes out so, so well when this is cold brewed. It’s far stronger and far more clear than when it’s hot, and the rooibos doesn’t become overpowering. I had feared it might, but if anything, it seems to fade into the background more in the face of the berry flavouring. It also develops a creamy, delicately floral flavour that really isn’t there when hot. A hugely enjoyable cold brew, and one I’m certain to turn to time and again this summer.

thank you to Scheherazade who let me try some of this in our swap! This one smells like rooibos when it’s in dry form and brewing but once you take a sip of this its full of delicious berry goodness! This is more a red fruit rooibos than blue fruit but overall it’s just a happy fruity goodness time. That is my official stance. and now? now i’m tired. seriously behind in sipdowns but at least i managed a couple today with some steps towards being able to finish a bunch up over the next couple of days..216 and counting, though i think i’m slightly less as i lost track of a few things i suspect.

I have until Saturday evening, and I think technically the challenge was 190 :)

This one is from the package that I’ve started thinking of as Cteresa’s Yumchaa Highlights. :) It was one I had already seen and been interested in, so I was very pleased that she included a sample of it for me to try before purchasing.

I was double glad of it, when it turns out to be a disappointment to me when brewed hot. I mean it tasted really nice and all, but so so busy! There are so many things in this that neither I nor the boyfriend could pick anything out of the flavour in particular. It was just all sort of jumbled together into a generic ‘fruit flavour’.

And while that’s nice and all, it’s just not that interesting. It has no personality.

So I despaired a bit.

Then this week, while it has been so hot, I’ve been doing a fair amount of coldbrewing, and it struck me that this would be an excellent way to round of the sample.

It works much better for me as a cold brew. It’s still a generic ‘fruit flavour’ with nothing in particular standing out, but somehow that seems less anonymous and tame when it has spent some 8-10 hours in the fridge first. I’m glad I decided to do this and I’m rating it solely based on this.

I’ve been drinking two glasses just now while I’m catching up on Steepster, having not looked for a few days. Nope, make that three glasses.

Lost count of how many packages of this I have gone through. My last one finished a while ago and managed to restock this – a nice rooibos is a very important winter essential for me!

And a just couple notes:

- they changed the packaging! “curators of immodest tea”, cute and yes this is a damn immodest tea blend.

- this is tea to be drunk fresh, not to be saved. The fresh natural flavourings are a total joy, always, but this is so much better when fresh. It is perfuming my whole kitchen, just from sitting in the paper bag overnight and then having transferred it to a tin.

- this particular package is slightly richer in strawberry and kiwi than previous ones (that I remember). Rose and vanilla and the other berries just rounding it off.

As good as I remembered, a total treat.

my daughter managed the exploit to be allergic to kiwi

Oh, poor thing, allergies suck – kiwi is kinda of easy to avoid, except there are some surprises.

Theoretically it is on this blend, but I had not noticed before. It is funny that I have gone through so many packages of this and it´s always a little bit, slightly different – natural flavourings are more impredictable I guess! But so much more gorgeous…

I had the ends of a bag of this, and a new one of Yumchaa’s Raspberry Vanilla, and after a few nights of alternate enjoying, decided it was time for a proper taste test, before all the Berry Berry Nice was gone. It was totally scientific! Well, actually, it was nothing of the sort. I put the teas straight into two cups and infused for the same amount of time, then divided those two cups into two more, so Cara and I could each taste properly. Naturally, we ended up with different preferences, but Berry Berry Nice is my winner.

With that mix of fruits, I’ve very little hope of distinguishing each flavour note, but despite Yumchaa’s description of it as a “tart treat”, I don’t find it tart at all. Both it and Raspberry Vanilla have vanilla and rose petals (though BBN has vanilla “pieces” while RV has “pods” — ??) and I’d have thought the combined fruits in BBN were at least as tart as raspberry, but I find it a smoother, less tangy tea nonetheless.

It’s all gone now, and I will definitely be ordering more of this favourite. It happily serves as a winter, nighttime drink, as well as the summery one the “drink while wearing sunglasses” suggests.

After the Kusmi genmaicha disaster, I needed to drink something safe and strong flavored to cover all lingering unpleasantless both in my mouth, as well as in my apartment’s smell.
I decided then to open a new bag from my Yumchaa order.
FYI I ordered a few bags that I had delivered at my in-laws and collected there at Christmas. It was nicely wrapped in a thick enveloppe and the whole room was already sweetly fragrant even if the enveloppe had only been there for 2 days and had not been opened yet. My whole suitcase seemed to have the delighful smell when I opened it after arriving home. A much nicer experience than when I bring back cheese…
Putting this aside, I decided to try Cteresa’s favorite rooibos, the one that had motivated my initial order.
When opening the bag, I realized it was way less fragrant than the raspberry vanilla, that there were actual pieces of dried strawberries and other unidentified, as of now, fruits.
I was looking forward the tasting;) And this time I was not disappointed: the flavors blend harmoniously together. Strawberry and vanilla were the two most easy to identify flavors. But not the only ones definitely. I’ll keep looking but tonight, I just feel like enjoying my brew.
I love the remaining taste of fruits which last on my lips, much better than a gloss artificially flavored.
I can definitely see how this one could become an all-time favorite of mine.

I am so glad to not have misguided! I love this one, am on my 4th or 5th pack of this and I swear is a magical mood lifter. But I like all Yumchaa rooibos.

I trusted you on sight on the basis of some share common tastes, combined with the realization that rooibos go down much faster than any other teas in my cupboard. I absolutely do not regret this decision.

I am getting pickier and pickier about rooibos – I love it, but it has to be good rooibos. My favorite companies for rooibos blends are Mariage fréres (Sigh, predictably. Saw your note about Surabaya and I love lychee black tea so that is going on check list!), Yumchaa and now Theodor – I am crazily in love with Theodor teas right now and their rooibos mixes are also awesome!

Me thinks this one will not last long in my cupboard… love it!