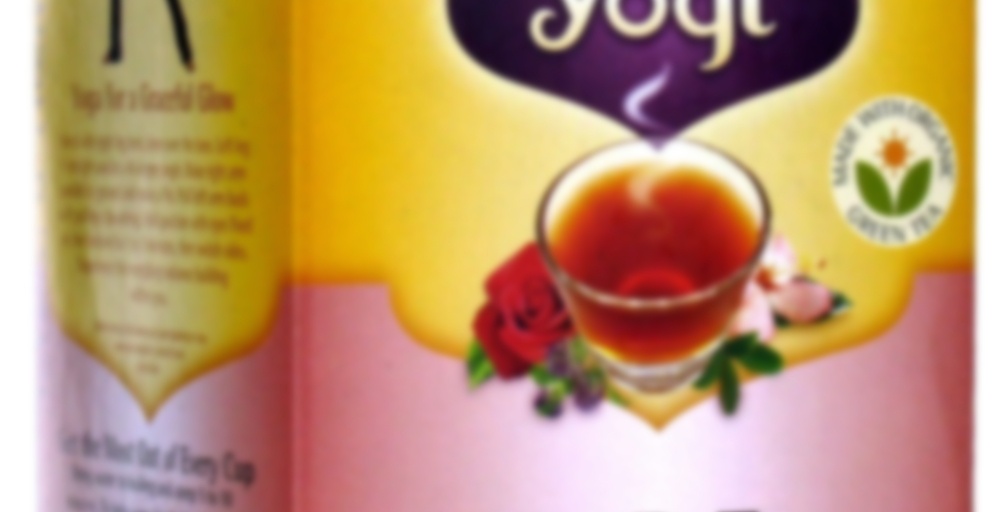 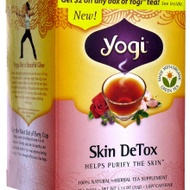 Our skin reflects our diet and lifestyle choices: it’s the mirror to internal health. It’s just as essential to cleanse from the inside; by reducing internal impurities, you can have clearer, glowing skin. Yogi Skin DeTox was formulated to support a healthy skin care regimen by shedding impurities. Fragrant rose petal and hibiscus, used in Ayurveda to cool and soothe the skin, entice the senses with a fresh, floral scent. Traditional liver-cleansers burdock and yellow dock combined with ancient “blood cleansing” red clover help purify the skin, and organic green tea rejuvenates with an antioxidant boost. Discover beauty from within in a deliciously cleansing brew of Skin DeTox!*

I am getting to taste a lot of tea this weekend, as my daughter is trying some new ones and has liked any of them, so she keeps passing the cup to me. This one was a BLEH! For her, but I didn’t think it was bad. I don’t know from just one cup if it would improve my skin or not, but it was pleasant enough to drink!

I’m going to update this when I can give a better sense of how it works on my skin. In the meantime, the taste is definitely not my motivation for drinking it- the flavor is very floral, a strong rose scent and taste. The perfumey nature of the rose obscures the other notes for me.

Sorry about the taste. Hope it helps the skin! :)

This actually sounds good- but the name sounds like a lot of hype.

Oh I just realized your in Houston. Yea a fellow Houstonian!!!

It may very well be hype- folks on the yogiteas website seem to have reported good results. I’ll be keeping an eye on my skin. Most of Yogi Teas’ teas actually do produce results, so I’m at least hopeful.

H-Town in the House!

I truly wish I got the floral taste that other people are reporting, but to me, this tastes like a medley of terrible yet unidentifiable herbs. I think this is one of those teas for people who are willing to consume disgusting things if they believe it will make them healthier. As for me, I’m sure I can find something else that doesn’t make me want to gag.

awww sure I won’t taste this one !

I love this tea. I actually drank it on a daily bases for a over a month just to track the results and did see a more radiant glow and clarity in my skin. As of now I drink it at least 4 times a week. It is very floral and has a powerful rose/rosewater scent and taste but it happens to be one of the things that I love most about the tea. I always have people that ask me what is my daily skin routine and I always recommend Skin DeTox a means of getting clean, clear and radiant skin!

Sweet, fruity, hibiscus-y; would do well as an iced or hot tea (or room-temp tea). Very pleasant taste makes it one of my go-to teas when I can’t decide what to drink. Added benefit of containing herbs that are good for the skin, like burdock and dandelion.

I like this too. Thanks for pointing out that it has burdock and dandelion – completely missed that! I also love the suggested yoga pose “for a graceful glow”.

This is one of my favorite teas, and definitely my favorite to drink plain. It’s naturally quite sweet. I can’t say I drink it regularly enough to have noticed any effects on my skin either way, but the flavor by itself keeps me buying this. I typically just leave the bag in the cup while I’m drinking it.

I’ll start off by saying that I do not generally enjoy floral teas, so in terms of the flavor, this Skin Detox Tea would not be my first choice. As mentioned, the taste is very floral — particularly “rose”-like. If you enjoy rose flavor, you’ll probably enjoy the taste of this tea.

Having said that, it’s definitely not disgusting, even for someone like me who doesn’t like floral flavors very much. I do feel like it’s helping with my skin, so that’s a huge plus!

I also like that it has a little bit of caffeine, so it’s a good choice when I’m looking for a little energy boost without reaching coffee-levels of caffeine.

I’m mostly tasting the rose, grape, pomegranate, and the green tea. I also say overall herbal. It’s also fairly sweet from the pomegranate and rose flavoring which I’m digging. Good with honey or without for me. I’m not too sure about the skin detox effectiveness, but somehow, it helped with my headache. Hopefully the skin detox helps with my breakouts, though there would be no surprise if it doesn’t. Glad I got this on sale, because I would haven’t purchased it otherwise or rated it on the higher end.

I was honestly expecting to be more offended by the taste of this one based on the ingredients. It brews up to mostly taste like rose and honey bush. I can detect the licorice in the scent and aftertaste. I don’t particularly like that taste, but I’m trying to acclimate myself to it so this is a good one to sip for that purpose. Overall it’s pretty good if you like rose teas. I use this on the go when loose leaf isn’t an option.

Sipdown (again before it entered my cupboard)!

Another generous add in from Kat_Maria.

Typically, I hate teas like this one which promise/boast about having great health benefits because I really don’t think that’s what tea drinking should be about. If those benefits are true, that should be like an “added bonus” for drinking tea, not the sole reason you do it because most of the time the benefits are way over hyped/played up.

An example would be the belief Green Tea is great for weight loss. The way some people push this, it sounds like Green Tea on its own is going to help you shed the pounds, but you need to combine drinking green tea (on a very regular basis) along with a good diet and exercise to see any real benefits. I once witnessed a girl purchase 100g of Bancha from Tea Desire. She had no tea knowledge at all, and was quite clearly asking about Green Tea (she just asked if they had ‘Green Tea, like is healthy for you’) because it would supposedly help her lose weight and I just felt so bad for her (she was a bigger girl, and couldn’t have been more than 15 years old) because it was clear she was looking for some cure-all when it really doesn’t work that way.

That said, and semi-rant over I actually thought this one was surprisingly very tasty, though I can’t remember what was in it. It was sort of fruity but also kind of minty/refreshing and vaguely reminded me of cookies. I’d totally drink it again, but because of the flavour and not its ability to “purify the skin”.

I agree! My friend here found this tea company that boasts all these things a few weeks ago and the box of bagged tea was $30! She asked me if I wanted to do a joint order. Uh, nope.

Haha. I remember someone on here was like “saying tea is good for your health/weight loss/whatever is like telling people to have sex to burn callories”

Haha I went to Teavana and the woman at the store very excitedly pushed Weight To Go and told me her manager dropped 10 pounds in a week just by adding the tea to her usual routine. My mom and I just looked at her like “Wtf have you been smoking?!?” because it was just such an absurd statement to make.

I totally agree with your rant there. That sort of thing is more than enough to make NOT want to try something.

I once had a tea that was just called “Weight Loss Tea” and even though the tea itself was pretty tasty I never wanted to drink it just because I hated the name!

I can only tell you that it did not purify my skin!

A dramatic reduction of dairy in my diet did, though ;)