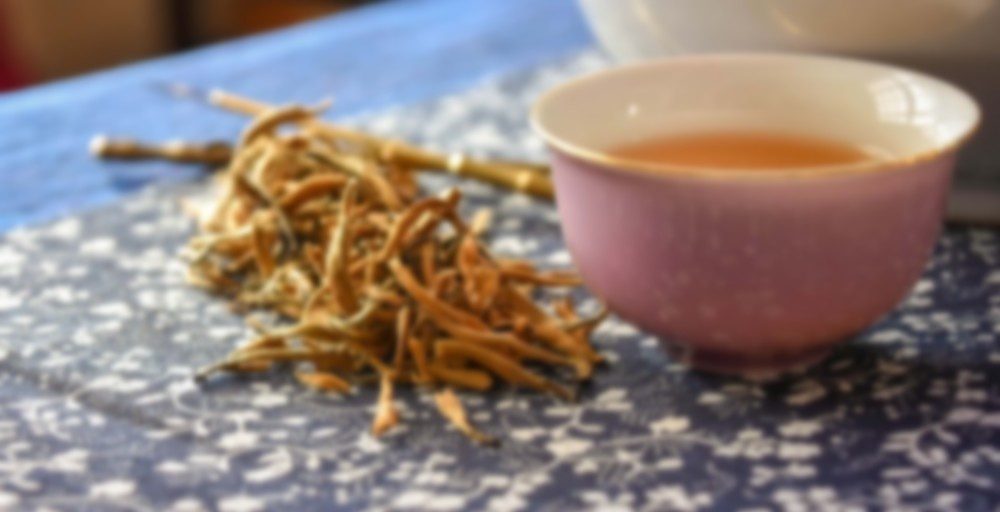 by Verdant Tea
84
You

This exquisite offering from Wang Yanxin combines the very best of two of our favorite teas- Yunnan White Jasmine and Golden Fleece. Huge buds are picked from Yunnan Da Ba, a varietal normally used for white tea. These buds are allowed to fully oxidize into black tea, but during oxidation and drying, wild jasmine blossom are strewn among the buds, allowing the natural aroma of the jasmine to absorb over several days into the tea itself. The old craft of true jasmine scenting is a slow laborious process, but the results are worth it. This tea is as rich and sweet as Golden Fleece and as luscious as Jasmine.

mouthfeel like an underwater current in a cold mountain stream

Just when I thought I’d seen and tried all things jasmine, along comes this tea to dispel that notion. And what an incredibly good jasmine tea this is! It’s quite similar to Verdant’s White Jasmine which I also enjoy with its clean, fresh, and sweet jasmine fragrance and taste. Here the jasmine is accented with a little malt and caramel sweetness in the aftertaste. Its flavor is soft yet prominent. A lovely tea and one that’s great for grandpa steeping.

I recently discovered a cache of Verdant samples about which I had totally forgotten. It seems that I have been so focused on sipping down some of the 2016-17 Yunnan Sourcing teas I acquired that I entirely forgot about the sample pile. After going through them and sorting them by date, I figured this would be one to throw out since it was a 2016 harvest tea and my experience with scented teas suggested they do not age well. I opened it anyway just to be sure, and to my delight, was greeted by a lovely jasmine aroma. Knowing that the sample was likely still viable, I decided to go ahead and give it a shot.

Prior to the rinse, the dry blend emitted a strong aroma of jasmine underscored by hints of vanilla. After the rinse, I detected emerging aromas of cocoa and cinnamon. The first proper infusion brought out scents of brown toast and malt. In the mouth, the liquor presented a delicately floral, jasmine-laced entry that soon made way for subtle notes of malt, cream, brown toast, and vanilla chased by a sweet potato note. Subsequent infusions brought out the scent of sweet potatoes as well as a stronger sweet potato presence in the mouth. The impressions of cocoa and cinnamon that had previously been missing on the palate began to make their mark in the mouth. I also began to detect new notes of caramel, honey, baked bread, graham cracker, and minerals. Interestingly, there were some alternately herbal, vegetal impressions that reminded me of both celery and fennel that were most noticeable on the finish. I recalled finding such notes in Verdant’s Golden Fleece as well. The later infusions were primarily dominated by notes of minerals and malt balanced by fleeting impressions of jasmine, brown toast, fennel, and sweet potato.

Truthfully, I wasn’t expecting much from this given the age of the sample, but I found that it had managed to hold up exceptionally well. Much like Verdant’s Yunnan White Jasmine, the jasmine presence was noticeable without being overbearing, allowing the tea with which it was blended equal time to shine. The jasmine integrated well with the base tea, producing a very mellow, balanced, nuanced blend. Overall, if one were looking for a blend with an exceptionally heavy jasmine presence, one might want to look elsewhere, but if one were looking for a sophisticated, balanced jasmine black tea, this would very likely fit the bill.

Ooo, I might have to pick up a small pack of this on my next order from them. I’d worried the Jasmine might overpower the Dian Hong base, but it sounds like a great balance from your note!

Iteg, the jasmine was surprisingly mellow, but that may have been due to my sample’s age more than anything. It’s my understanding that the tea used in this blend is Golden Fleece, which is a really nice Dian Hong that seems to get consistently high scores more or less across the board. I haven’t seen any complaints about the 2017 version of this tea, but I can’t speak to its overall quality since I am only familiar with the 2016 version.

Hooray for new tea! I finally got a chance to try this one from my order last week, I’ve had a terribly rough 5 days with taking my poor cat to the vet for bladder stones and a UTI..lots of stress and worry, and he’s still not 100% so the worrying will continue this week :( however he does appear to be on the mend, so I will focus on that, and on drinking good, relaxing teas to help us get through this rough time.

Anyways, onto this tea! Wow, I’m the first note on this one, and of course I babble about my cat in it lol..oh well. So when I saw this tea on Verdant’s site, as I was placing my order for my restock of Yunnan White Jasmine (a favorite of mine and the fiance’s), I saw this tea and was like WOAH. MUST TRY. Two of my favorite things, Verdant’s delicious jasmine, and Golden Fleece, which I haven’t had in ages, but the last time I had it, it was amazing! So I was pretty excited for this tea.

I used the recommended Western steeping parameters of just under boiling water (around 205 degrees?), and a short 25s steeping. This tea smells delicious when brewed, and is a nice golden color.

As for the flavor, I like how this is very similar to the Yunnan White, but with a twist! The forefront of the flavor is very jasmine, and it’s Verdant’s signature delicious jasmine that I love. At first it’s like oh okay, this is Yunnan White..but then in the aftertaste…the Golden Fleece emerges, with a delicious honeyed note and a mild maltiness. Mostly the pronounced honey is what hits, with some waffle! It lingers quite some time as well! The second steeping is quite similar, maybe I can get through one more tonight to see if the Golden Fleece comes out more, but I have to watch my caffeine intake. Oh, a note though, this tea has a calming effect for me, which is surprising for a black tea, and with all the stress I’ve been going through as of late! Must be the jasmine in there :)

Overall, I am very pleased that I have a bag of this to keep drinking! It is just different enough from Yunnan White Jasmine that I enjoy it, and similar enough that it’s comforting and delicious. A winner for me, and as close to a blend from Verdant as I can get (man, I miss their blends, Laoshan Village Chai, Ginger Sage Winter Spa Blend… :( bring those back!). Happy that I picked some of this up.