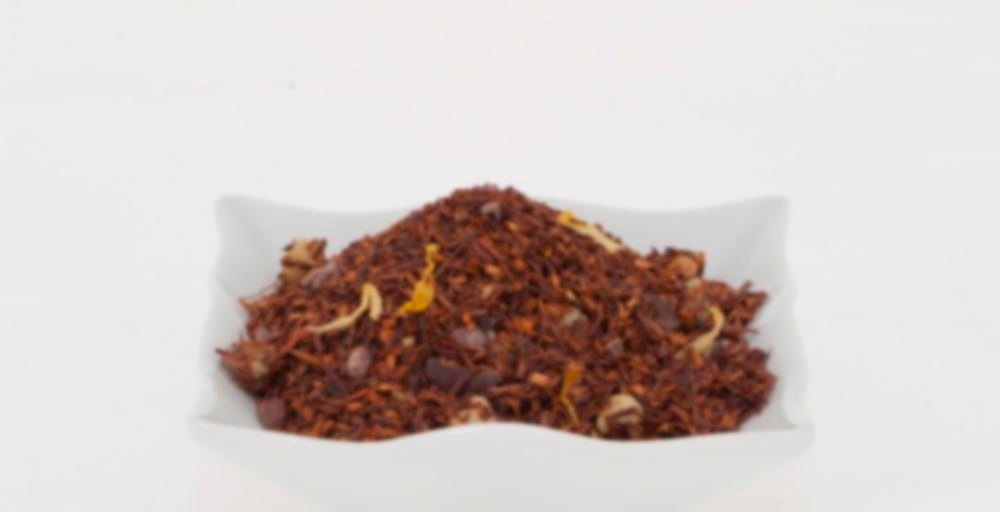 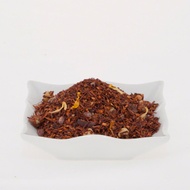 by Tropical Tea Company
64
You

And now for the very brief attempt at drinking down all my samples (hahaha), it’s time for one of the last teas I haven’t tried out of my first box from Azzrian! Yep, I know what was sent when, it’s all on my spreadsheet :D Although straight teas were clearly calling to me tonight, I was in the mood for a sweet rooibos, and luckily remembered that I hadn’t tried this one yet! Here’s hoping it’s tasty.

I can’t recall exactly what the dry rooibos smelled like, but steeped, there’s a distinct but not unpleasant rooibos smell along with a familiar, tantalizing sweetness.

Definitely interesting! I’m getting a sweet and creamy perhaps white chocolatey flavour with a definite mintiness – there’s a cool sensation lingering in my mouth post-swallow. Not what I expected, but it’s tasty! No medicinal flavour, although my throat is feeling a bit scratchy after a few sips (but I am in cold limbo, as in the place where I’ve had the aches and sore throat and perma-headache, but haven’t yet quite left those behind and fully progressed to the all-day sneezing and constantly runny nose). So basically what I"m saying is that my throat was already sore, so it’s hard to blame the rooibos for anything.

Anyhow, this is a pretty nice dessert rooibos; I’m impressed! I feel like minty is not a flavour I was supposed to be getting, but it’s unmistakeable. It’s also not really a peppermint tea sort of flavour, just a mintiness like most chewing gums have, so it’s not bothersome to me. Thanks for the sample, Azzrian!

you are most welcome! :)

Yay! You are back. Hope you feel better soon.

Yes, hopefully won’t be gone so long again… the backlog of notices/posts I have to catch up on is ridiculous, and since the ‘see more’ button is still only semi-functional, it’s difficult.

TTB-A sample! I accidentally put too much leaf in this, but it’s a rooibos, so can you really overleaf it?

I realized why the mint rooibos appealed to me, because this has a medicinal almost minty smell of the dry leaf, and it appears in the taste as well. It works ok in this because this is chocolate so mint it errs on the minty side instead of the medicine side (like some fruity rooibos blends). I mean it isn’t super chocolate but it’s enough, and it kind of reminds me of a minty white chocolate truffle, sure. Pretty decent overall but having tried this and the mint one I think I prefer the mint since it really owns the mint flavor. Maybe I’m just suggestible but my throat is getting a bit of scratchiness in the back like Kittena described after drinking this, so that’s a bit unpleasant. Eh, rooibos.

Hmm…I’ve never had a rooibos before, so I can’t really compare this to anything. The in bag smell wasn’t great, but it wasn’t bad. The brewed smell I actually really enjoyed. I can see some white chocolate coming through here, but not enough to make me hate it. I can also see the medicated vanilla after taste, but that’s probably not fair. A.) I had just read Azzrian’s review, and I’m amazingly impressionable. B.) Vanilla has a tendency to taste like medicine to me. Seriously, if the flavor of vanilla were a person, I’d punch him right in the face.

Anyway, this is just kind of meh. I’m not preparing to buy another bag, but I’m also not looking for friends to give this away to.

Poor Vanilla nothing! I’m sorry, but it’s plagued me for ages. I understand that some people do truly love their vanilla (here’s lookin’ at you Dylan), but I don’t. I can’t. I won’t. Vanilla is that flavor that’s there to spit in my face when the flavor I want is gone. It’s the hail storm that comes when I decide to go outside and enjoy the sunshine. Then why I decide to go in and enjoy the soothing sounds of rain, vanilla is that disgustingly awful humidity inducing sunshine. Vanilla is that funky smell on the leftovers I’ve been saving for JUST the right time (which clearly should have been a week ago). Vanilla is a reminder of every disappointing event in my entire life.

Sorry, we’re out of sherbet, lucky for you I’ve got vanilla ice cream.
Want some cake? Have some vanilla.
Oh, sorry bro I don’t have any stouts on draught, but I do have this porter that was probably great until the brewer decided to douse it with levels of vanilla that would turn you into the Hulk if it were gamma radiation and not vanilla.

Ohhhh I do miss porters and stouts! Brewed a smoked Porter once and won a competition but that was another lifetime ago…you would have loved it – not one drop of vanilla in it – on the other hand it had lovely chocolate notes!
So sorry about your vanilla issues but I do see your point. Unfortunately too many PEOPLE these days are vanilla but I suppose that is a topic for some other forum. :)

Haha, Blake, that made me laugh so hard. I can just see Bruce Banner getting angry at a vanilla tea and going on a stomping spree through Madagascar.

Very amusing and I love the visuals here :D

This is another generous sample from Azzrian. Thanks again!

So I’m not terribly fond of this one. It is sweet and I can see the white chocolate association if I really look for it. It does have a creamy flavor to it. I think my biggest problem is with the rooibos. I understand the medicinal label for rooibos as this might fit that descriptor. Normally rooibos tastes like a vanilla bean after you have used the vanilla goodness out of it. It also tastes like redwood trees smell, just the trees themselves. This just doesn’t live up to that. Perhaps some thing went wrong with this batch. I know this isn’t what I expected. Miss Azzrian did send me a good sized sample so I’ll ice it and see what happens then. Thanks for the chance to try a new tea Azzrian. :D

Well I read Amanda’s tasting note earlier and I had this tea waiting for me to try it as well. I was going to wait a day or two as not to be persuaded by Amanda’s note but since I could not sleep at all last night and I really have little decaf selection I decided to go for it.
I agree with Amanda on one thing for sure and that is the smell. I do not care for the smell in bag or brewed. It does smell a little chocolatey though. I would love to add some sweetened condensed milk to this but have just got comfy on the sofa – laptop in lap – on top of me.
Never mind that – I had to get up for an unrelated reason so grabbed the condensed milk on the way back.
Well – its a little better now. No huge difference but better. I think it does bring out the white chocolate a lot more.
I appreciate that the flavors are not chemical though. I respect that the flavors do not drown out the flavor of the rooibos too.
I don’t care for the way it seems to dry out my throat in the back. Some teas do this to me for some reason.
To be fair, I am not a huge fan of chocolate flavored things other than chocolate itself.
The aftertaste I am getting is vanilla rather than chocolate – its a little medicinal.
This is not one I will be buying again but I will drink the rest of it when I need to stay away from caffeine.

I’m going to get chocolate syrup to see if that helps it out, but condensed milk I may have to try too.

Let me know how that works out – I am afraid all you would have is watered down chocolate after that. I don’t think that tea is strong enough or complex enough to support it. I may very well be wrong though. Curious to hear back on it!

Hmm..for being something truffle, this does not smell so good, dry leaf or steeped liquid.

There isn’t much to it. It just tastes like rooibos with a strange aftertaste, so it definitely benefits from milk and sugar. I wouldn’t think white chocolate at all if I hadn’t sweetened it.

Even then I’m not that sure if I like it, because there’s still a weird aftertaste. But it was so cheap it was worth a shot. Win some cups, lose some cups.

Another tea from Emilie. I’m wondering if I didn’t steep this long enough…I definitely saw white chocolate in the tea, but I didn’t taste much of anything but straight up rooibos.

It smells a little like chocolate. Perhaps like white chocolate (which isn’t really chocolate, since it contains no cocoa solids). Anyway, flavour is mostly rooibos, with a hint of vanilla and mint.