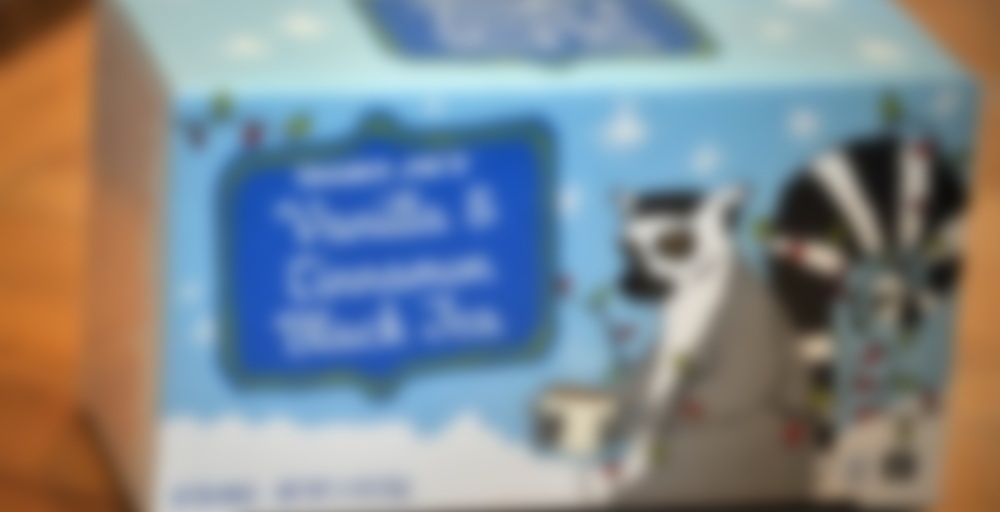 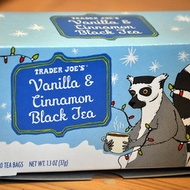 As I expected, this improves with the addition of a little half-and-half. Sugar cookie sweetness.

My opportunities to visit and procure stuff from Trader Joe’s are few and far between, but tea-wise, their house brands seem to be consistently decent and consistently inexpensive.

May you find a few minutes today to recall the sweet spots (there were some, weren’t there?) of 2011. Be blessed, friends!

Much love, and hopes for a really fantastic 2012!

Christmas present from the sister-in-law.

This tea smells EXACTLY like that tub of Betty Crocker vanilla icing. That sickly sweet smelling icing. You know the stuff your boyfriends and husbands would probably sit and eat in a whole sitting straight from the tub… or is that just mine?

This tea does well with added sugar and cream/milk. On it’s own it’s pretty lost. The smell is what I can’t get over. For TJ pricing, I would probably buy this again. I’ve walked by people with this tea in my hand and have had them come up to me and ask me what it is… so I guess it truly smells good.

I love when my friends and family give me tea gifts cause even though most of them know nothing about tea, they show how much they care :-)

You know what makes this tea awesome? The fact that there’s a picture of an over-caffeinated lemur on the package. That in itself is almost worth the purchase. As far as tea goes, this falls along the same vein as Celestial Seasonings. Not the best quality but it has its place. This is especially good if you doctor it up with milk and sugar. I have also used it to make vanilla tea-infused granola multiple times, so it gets extra points for that. It’s finely milled, so you don’t have to put it through the spice grinder.

Oh man, I really LOVE this tea! Obviously I found it at TJs & I didn’t realize until I brewed a pot that it is very similar to Celestial Seasoning’s Nutcracker Sweet, which I adore (at a TJs price – which I adore even more!) I bought a bunch of boxes for Christmas presents. I just recently found the TJs Candy Cane Green Tea on this site & will start my local TJ search! Thankful for Steepster.com :o)

My favorite tea to drink on a daily basis (which means stockpiling during the seasonal months that you can actually buy it).

A favorite. It’s seasonal, and thankfully I have a few boxes in my cupboard because I know better this year. The cinnamon could be more pronounced.

Needed a mid-afternoon pick me up and haven’t had this in a while.

Taste is simplistic, I’m not picking up the nuances I have come to expect from black tea but there is decent sweet vanilla flavor at the forefront rounded out by an edge of cinnamon at the end of the sip.

It was good. Not awful, but not amazing either. Slightly sweet, hints of vanilla and cinnamon, as advertised.

This is absolutely my favorite tea, and I drink at least one cup a day. As it’s a Trader Joe’s seasonal, I had to stock up, and currently my stash holds about 12 boxes of it, not including the one that’s open.

This is a perfect morning tea, though I’m well aware I brew it for longer than recommended, I like it strong, and I like to bring out the more bitter notes of the black tea itself. While this is sweet on its own, a spoonful of raw honey makes it amazing, and gives it just the boost to get me started on my day.

It’s also lovely to unwind with, as just the calming scents of the cinnamon and vanilla when its brewing are enough to make one relax. The cinnamon is very subtle, supporting the vanilla and complementing it, unlike Trader Joe’s other cinnamon offerings (Specifically the cinnamon tempest and the harvest blend).