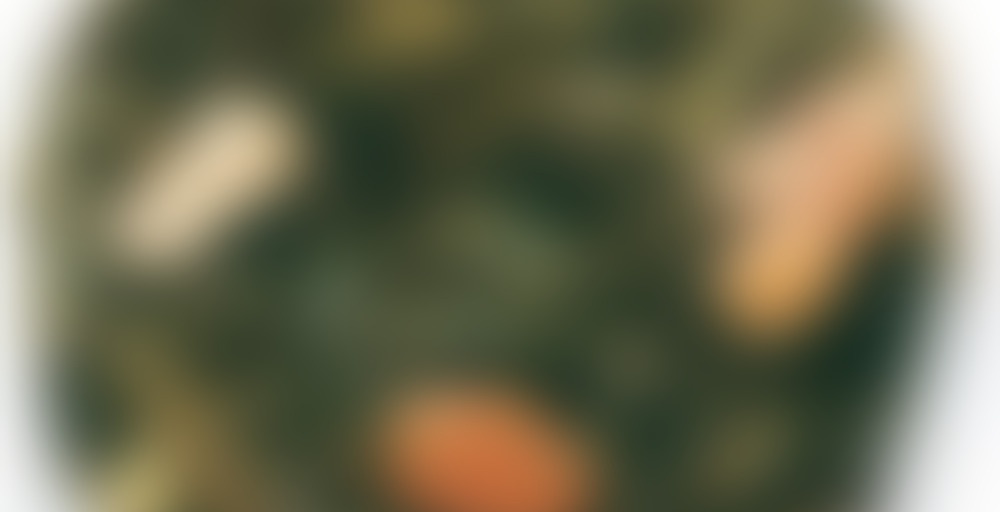 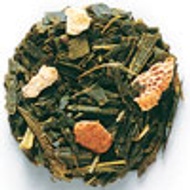 This is a blend of green tea and caramel pieces, accented with apple bits. This tea reminds me of theme parks as a child eating a sweet and sticky caramel dipped apple.

Another man’s trash is another man’s treasure! Zeitfliesst doesn’t care for this so he passed it on to me. I love both carameled and sour apples so I’m on an endless quest for teas flavored as such. The trick; however, is that I don’t care for black based flavored teas and they are more common than green or white based flavored teas. I definitely realize that everyone’s taste in tea is different, but there are a few (like Ricky’s cocomint/nail polish comparison LOL) that I just can’t fathom or understand… someone not liking this is another. Oh well, maybe I’ll understand by the end of my cuppa.

As soon as I opened the tin I can smell both the caramel and the apple… infact mom said she could smell it steeping from the other end of our house. Because of the flavorings I decided to measure this by volume (1 heaping tsp) instead of weight. Infact, it smells so good I decide to skip the steeping all together and just grab a spoon… lol! Kidding. It’s tempting, but I decide to steep it anyway. I didn’t have any steeping suggestions, so I just used the general “here, this is a green tea” suggestion. I’m further questioning what could possibly be wrong w/ this tea…

The liquor is kinda cloudy due to the flavorings and the aroma is almost as strong as the raw leaf.

Craaappp… So this is what he was talking about! Have you ever been so excited to try a tea that when it failed to meet your expectations you were almost brought to tears? This is one of them. This tea is bitter. But, and this is a 1st for me, it’s bitter and weak. Weird. Don’t get me wrong, the flavor ratio of green tea/apple/caramel is pretty decent, but it’s just very weak across the board. And bitter. I feel bad giving this tea such a low rating because, except for a little bitterness, the flavor that is there isn’t bad… there’s just not much there to be bad… Now what to make to cheer myself up?

I’m sorry to hear that you didn’t like it either :(
It’s so weird because the reviews at Teaviews all seemed quite positive, although they did mention the weak flavor as well. Oh well, at least I have someone agreeing with me.

Aww, it’s always so upsetting to look forward to a tea and then have it turn out to not meet your expectations. This one really did sound good; I also love caramel and apples. I’m sorry you had such a bad experience!

this seems one of those, OMG THIS IS AWFUL-here try some events….now i kinda want to try it LOL

@AmazonV – I was thinking the same thing, lol

AmazonV, except for some (slight) bitterness it is not awful. It’s just… well… I can’t say what it is, it isn’t.

Nice review I really hope to try this soon.

This was the last thing I drank last night and I was trying to get the taste out of my mouth with a minty flavored chewing gum right before I went to bed. Surprisingly, as I lay awake (too much caffeine I suppose) in bed, I could still taste the caramel THROUGH the mint flavor. And it was much sweeter. This gave me an idea.

This morning I am starting off with a cup of this before I ramp up to black temperature, with 1 tsp of tea and 1/16 tsp of peppermint leaves in the filter steeped at 45 seconds.

Bitterness solved! And that amount of peppermint doesn’t deliver much minty taste, certainly not as much as the gum did.

But there’s still something about the caramel that isn’t sitting well. Or maybe it’s the caramel/apple combo. The apple is very green and when I think of caramel apples I think of red apples. Bumping it down a bit for not improving significantly with the removal of the bitterness. I might continue to experiment with it. Might use spearmint instead of peppermint, that sort of thing. There’s not much sample left (fortunately) but with what’s left, I might as well look at it as a sort of science project…

Re: “The apple is very green and when I think of caramel apples I think of red apples”- I love green apples and I find that the tartness works well w/ the (sometimes) over sweetness of the caramel (I use caramel dip, not hard caramel on the apple itself)… I was hoping this would be like those green sour caramel apple suckers- MASSIVE disappointment and fataliTEA. Den’s Tea as an AMAZING apple sencha- I think I’m gonna find a green based caramel tea and blend the 2.

Second try. I’ve used 2 tsps to bring out the flavor a bit more. I still don’t like the bubblegum smell, but this time I could actually taste the green tea which is much better than last time when it felt like drinking colored hot water.

Nice review I really want to try this if you have any left?

I think I only took out 5 tsps or so from the 3.5oz tin. Would you be willing to swap it for something you don’t want?

I live in Canada btw :P

what temperature are you using? perhaps tone down the heat and brew a bit longer?

I used water that is under boiling, tried steeping a bit longer but I just didn’t like it(especially the smell).

Whoa. An incredibly sweet smelling delight. Taste is more subtle than the fragrance but still produces a lot of crisp sweetness. Very good.

Ummm… What do you do to make this so good? I’d LOVE to know your steeping parameters!