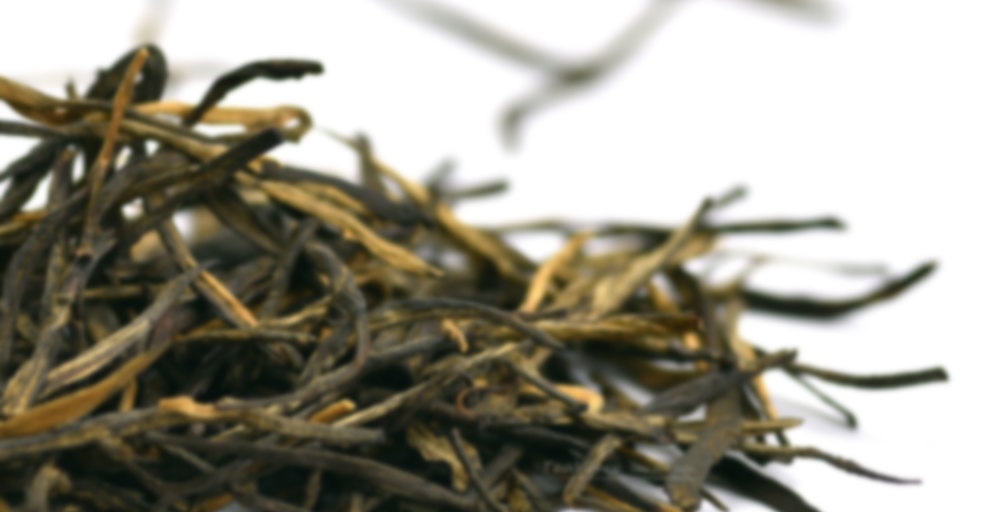 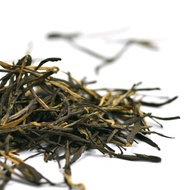 Plucking Standard: One bud with one leaf

Dry Tea: Even and straight with needle-like shape, full of golden pekoes on the tea buds, black bloom color

Organic Hong Songzhen Black Tea, a kind of Yunnan black tea (Dian Hong in short), is made of the one bud with one leaf from Yunnan large leaf Dayezhong spring tea. The dry leaf is even and straight, like Songzhen (Spine needle), hence its name “Hong SongZhen”. This tea is Dian Hong tea, but it is slightly different from the Fengqing Dian Hong tea.

I admit to being a bit nonplussed by some of the super low ratings for this tea.

It’s not my favorite from Teavivre and it does taste a bit like a Ceylon which is interesting. It’s like a Ceylon with a bit of an earthy undercurrent that brings it back to China. Somewhat astringent on the tail end which is also unusual for a Chinese black tea. There’s a touch of bread in there somewhere as well. I’m also getting a note that reminds me of fennel or anise?

It’s certainly not their best tea in my opinion, but it’s still high quality and perfectly tasty tea. :)

This tea from ashmanra is one of the biggest dismals in orthodox loose leaf for me. Thank you anyway for chance trying it.

I have decided to brew it gongfu, according to vendor instructions below A-House tasting note.

The wet leaf was still quite okay, ordinary malty aroma, without flaws. Common.

First steeps were quite strong, strongly malty reminding me, as LuckyMe suggest, Lipton. Especially their best selling Yellow Label. But I wouldn’t expect, nor want that in my loose leaf tea!

First steeps were indeed malty as I wrote, but unfortunately, at least, it wasn’t somehow awful. Just generic and boring. That was up to 50 seconds steep mark. Then it was just weaker and weaker, with worse and worse tannic flavour and that was all. Nothing else, but tannic and hints of malt. The last, 100 seconds steep was like brewing already brewed tea bag for 5 minutes and that’s it. Weak, somehow reminding tea, flavour.

Shame. Keeping the 40, as I would expect way more from this tea. Yes, it’s mellow. Yes, it’s unoffensive. It’s boring. For example, even Guria Likhauri is more complex than this. What’s wrong with this tea?

I had the same opinion, Martin, but sometimes other people like things that I do not like. I don’t think I have seen a single good review of this tea!

Then check their website reviews. I wonder if their are real or not…
Czech company, which is pretty much sourcing exactly same tea (maybe as well from teavivre, as the pictures are quite similar) says: “Extraordinary grade, tea for exceptional situations.” No, it’s not.

My other morning tea today – great accompaniment to the everything bagel with herb and garlic cream cheese :) another sipdown too, since why the hell not! haha still hold that this is a perfectly fine average tea.

Another from Teavivre’s sample sale. This one doesn’t seem to get much love. The leaves are probably the longest leaves I’ve ever seen, in mostly black with hints of gold. That feat alone should gain the tea some points. It does for me. Sipping the cup, I’m not finding any negative qualities or flavors that would give this a lower rating. If anything, there isn’t anything distinct about it, but it’s still tasty enough. The second steep resulted in a bit of an astringent cup, but that is my fault. I should have realized that the leaves were so big and the amount of leaves I used would make the flavor a bit bitey. But I like a stronger cup of tea anyway. The second cup was very dark and had a bready quality to it. It’s actually surprising that the tea became slightly astringent since this is the opposite of a tiny leafed tea. The only thing I could think of for the lower rating is the high expectations for Teavivre teas and that possibly this one isn’t as special as the other black teas they offer. Less detailed and distinct flavors maybe. But the tea is entirely acceptable to me. It probably would be better than most teas that another tea shop might sell, but that is just proving the great quality that Teavivre delivers.
Steep #1 // 2/3 sample pouch for a full mug// 16 minutes after boiling // 3 minute steep
Steep #2 // just boiled // 4 minute steep
Harvest: 2018

I bought this tea last spring and was very unimpressed with it. It was relatively flavorless, just slightly sweet, slightly astringent red water. It’s improved quite a lot over the last year, it now tastes like a fairly standard Yunnan black, but still fairly unremarkable. Tastes of malt and yam with maybe a touch of maple or cocoa.

I usually love Yunnan/Dian Hong teas, but this one has left me a bit puzzled. I can see why it’s called “Pine Needle” because the leaves look like exactly that. They’re long, straight, and pointy. The colour is right, too. That’s probably partly why I was expecting a lot more in taste terms than I actually got.

What I got, in very blunt terms, is nothing. I’m reminded most of white tea, in that it has the “sweet water” quality I often find with those. There’s also a coolness on the palate, after repeated sips, which I associate mostly with raw pu’erh. Flavour, though? Really none. Perhaps a very light maltiness, but otherwise…considering the variety of tea it is, and that it brews up a delicious looking amber, it’s a disappointment.

I’ve never found this before with a Teavivre tea, and I’m more than a little surprised. I’m pretty sure this isn’t how it’s supposed to be, but never having tried it before I can’t really comment.

Interesting, I got this one as well and while isn’t super bold it seems to have plenty of flavor

I have to agree with the other reviews of this tea. While it brews up a beautiful dark burgundy color, the flavor of the tea leaves a lot to be desired. There’s an unpleasant smell and taste to it that reminds of a generic black tea like Lipton. I’d describe the taste as somewhat earthy and malty. There’s no sweetness to it, no depth, and the flavor is basically the same steep after steep. It brews fairly strong and I reckon it would hold up well to milk and/or sugar.

Now, this one was a disappointment, which does not happen with Teavivre often in my experience. The appearance was cool and the aroma intriguing – grass, mushrooms, leather, spices. The taste, however, was quite meh, with astringency and copper predominating. No reason to order it again.

I received a sample of this tea with my order from Teavivre. I was curious to see how pine needles relate to black tea.

When I opened the silver sample package, there were long brown leaves inside. No aroma immediately presented itself so I sent my nose on a seek and find mission deep inside the package. Ultimately my sniffing sensors were able to pull a very slight grassy smell from the leaves.

I pretty closely followed the recommended brewing instructions and steeped the leaves at 195 degrees for five minutes. (NOTE: My Breville Automatic Tea Maker does not have a setting for the recommended temperature of 194 degrees.)

The finished product had a bright amber color. The aroma was a bit like southern sweet tea but very faint.

My first two sips produced a dim and distant flavor that was somewhat malty with an extra twinge that was kinda sorta like pine. I am not sure that I would have arrived at the pine flavor conclusion if I hadn’t been expecting it.

As I continued with two cups worth of sips, the flavor did build up on my palate sufficiently to make it seem stronger than it was initially. There was no astringency to speak of. I attributed the twinge to the pine-like attribute. The aftertaste also contained no bitterness.

As I am seasonally sinus-challenged, I prefer strong and robust flavors in my teas. The flavors in this selection are a bit anemic and indistinct for my taste. However, the flavors are not unpleasant, include Teavivre’s trademark smoothness, and may be strong enough for other tea drinkers.

Compared with other Dian Hong tea, this tea has a lighter taste!

Yes it does! Thanks, Angel!

This tea has a subtle malty aroma and I can see why it is called pine needle by the way the dry leaves are hard, thin, and pointy. It is malty and earthy but I am not getting much flavor out of this tea. It is bland with an astringent aftertaste. I wish I did not power through it and just made another cup of tea.

This tea is organic black tea, and when it compares to other Dian Hong, it’ll have a light taste. If you don’t mind, would you please let me know your brewing method on this tea?

4 grams of tea in 5 oz of water just below boiling. Rinse and three steepings of 1 min., 2 min., and 2 min. 30 sec. I combined the three steepings in one glass. It could have been too little tea, too high of a temperature, and/or to long of a steeping time, but it just didn’t turn out that well.

Hope you’ll find a way to get its best flavor and wish you a nice weekend!

If you have any feedback about it, please kindly let me know.