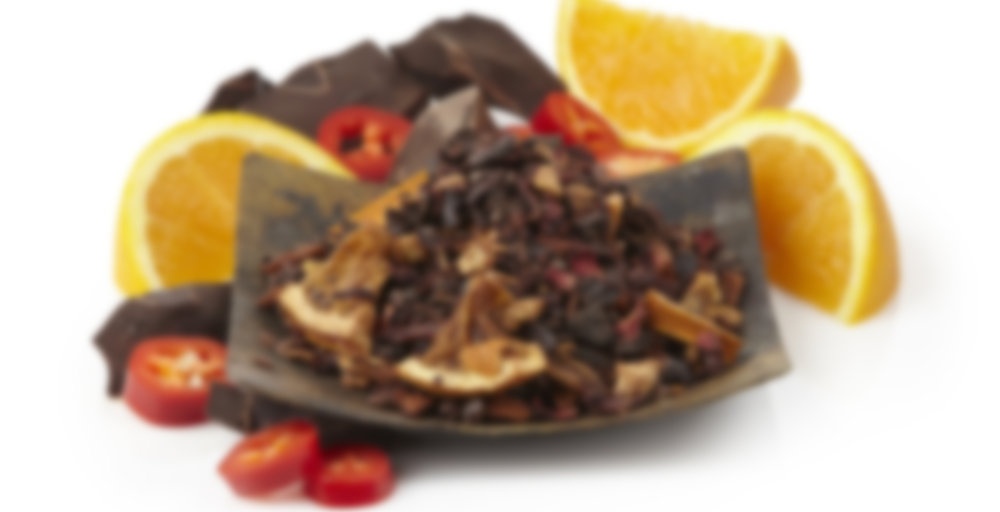 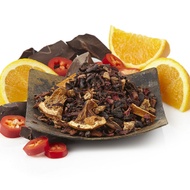 I having meaning to steep another cup of this for the last couple of days, but keep getting sidetracked by different teas. Today I decided to just go for it and give it another shot. It is a great tea, but is it every murky and thick! The chocolate and the orange are the dominant flavours, the spice is really actually subtle. I like the taste, but I do not really like all the junk at the bottom of the cup and in the infuser. This is a nice taste, but I would appreciate a more “tea” like aspect to it. It is just really murky and full of debris.

This is a tea that I have sent to others but never actually tried myself. Mostly because I didn’t really want it in the first place but rather it was simply cheaper for me to order the Holiday box than the other three teas individually. This just came as a bonus (and I am not a huge fan of the chocolate orange combination at the best of times so I wasn’t that excited). Then when I tried and hated all the other teas in that order, I sort of pushed off drinking this one. However, I have had it for a couple months and figured I should try it sooner or later as it might surprise me.

Tbh, I was surprised because I actually liked it the best out of all the ones in the holiday box. And by that, I mean I might be able to finish the box but the rest is being sent away. That means I am either going to send it in the swap to Roswell Strange or add it to the swap I am planning with Cavocorax if either of you want it.

Tastewise, there is orange and there is chocolate but there is also a bit of dustiness that I am not enjoying, probably from the cocoa powder. It isn’t horrible really, it is just not for me. Being a Teavana tea and a flavor I am not really a huge fan of, it was doomed from the start.

ETA: As I continue to sip, I don’t really realize the dusty quality so that may have been a fluke. Instead I am getting strong orange at the start of my sip that slowly transitions to chocolate with a slight chili kick. Still not for me but not as bad as the initial sip. Now I am off to get dressed and go to the gym.

My second and final brew of Teavana Orange Chocolate Sweet Spice ended up being a completely different beverage from last time because I used a quadruple dose of the blend and let it steep through the entire duration of MI5 Season 5 Episode 2.

In the end, the opaque, burgundy-colored solution tasted more like spiced wine than anything related to chocolate, but I liked it better this way than brewed weak (as prescribed). The spiced wine effect may have been produced by the overinfused hibiscus and orange pieces. The chocolate was completely shrouded.

Anyway, it seems safe to say that I won’t be buying this foody infusion again, but it was an interesting experiment made possible by the post-holiday sale.

I like chocolate and orange in candy form so I figured, Why not? I liked it but it was missing something. I added crushed red pepper flakes to bring out the heat a little. I don’t really like food or teas that are too spicy, but I seem to crave a little bit more spice lately. (It’s 11 degrees today) I really enjoyed it just a bit spicier. I really don’t know how much I used. The red pepper is sort of old so I think it had lost some of its heat. You’ll just have to do it by trial and error.:) I have also tried it with just a little lite vanilla soy milk. Ummm, yummy. It does have sort of a weird oil film as someone else said. For me, esthetically it’s not one I’d put in one of my fancy tea cups, maybe in a tumbler where I wouldn’t see it.

I got this for Christmas from my loving momma and didn’t think I’d enjoy it, honestly. I don’t typically like citrus and chocolate together but this is truly spot on! I add probably too much sugar but it serves as a dessert for me so I don’t mind the calories too much. The color is dark and the aroma is spicy oranges. I get the orange right on top, followed closely by the spice and lastly by the chocolate. The chocolate is pretty intense but was executed well. Overall, very enjoyable.
EDIT: I have since discovered that my doggy hates the smell of it. He won’t sit next to me on the couch and went as far away as across the room to the recliner to get away from it. Yikes! This one has a con.

Went to Oahu for my friend’s wedding and spent way too much money shopping. I went to Teavana to see if I could use my birthday reward at their store and I could! But along the way… Bought the holiday tea box as well. Weather here has gone back to being too hot for hot drinks yet,so I made a bunch of this iced. It’s got strong flavor and the name of the tea does match up to the taste but there’s something I don’t like. Maybe it’ll be better when it’s done hot, but for now I’d say no to buying more.

This tea was ok. It had a cinnamon orange with chocolate taste. I was not a big fan of this tea. The flavor was weird and I barely tasted the chocolate. This tea gets better when I drink more than one cup of it.

I wasn’t certain if I would like chocolate and orange together. They are both normally flavors I enjoy though. I’ve decided I enjoy it. There’s a subtle chocolately feel to the tea which has a definite orange flavor. However, the tea is rather murky and has oil spots which makes it not as appealing to look at.

This was quite nice, reminded me a lot of Kusmi tea’s Christmas tea. The orange and chocolate are very subtle, and I get hints of spice. It’s all very dulled flavour, but I enjoyed it.

Got this sample as a tea swap recently. I was curious to try it even though chocolate and orange together aren’t my thing. This tea brewed really murky and thick. I do not care for this tea at all-orange and chocolate do not belong together in my life.