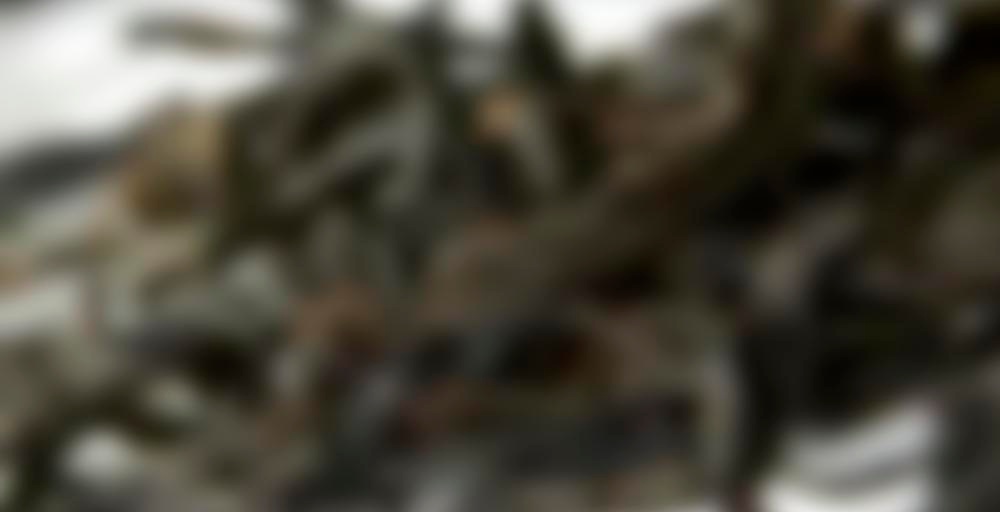 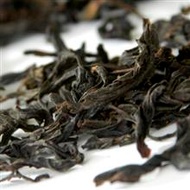 Sample number four out of ten this week! Hey I’m doing quite well!

This is one I can’t remember where came from. I’m a little concerned about what sort of impression it’s going to leave me with because it came in a ziplock pouch which had originally contained a TGY sample from Norbu. How does one clean those bags for re-use? How does one avoid TGY traces in the new sample? Oh well, at least it wasn’t a super-strongly aromatic one that was in there before, so I don’t imagine it to be much of a problem, really. But the idea of it puzzled me.

This one looks like a dark oolong and the leaves smelled like a dark oolong, with some cocoa-y notes to it, but after steeping, it suddenly smells greener. Kind of butter-y and vegetal. It still has the cocoa notes and the dark oolong oak-y notes too, though, so you can probably imagine that it’s a bit odd. (Again, I think of that TGY…)

The flavour is also a funny mix of two types, and it’s not just that it tastes like one of those oolongs that seem to be exactly half-fermented. It more like a blend of two. (TGY ghost? None of the others have described this, but on the other hand none of the other posts are very detailed.)

What I’ve actually got here is a very complex flavour profile, and it seems to change like a chameleon several times in just one sip. At the very front of the flavour I’m hit by something floral. Then immidiately after that follows something vaguely like cinnamon and after that we get something fruity, almost peach-y, but not as juicy. Finally the aftertaste is very green tea-ish and slightly minty. Of the cocoa notes in the aroma, I can find nothing.

I’m not going to award points for this because I don’t feel certain that the sample isn’t contaminated by what was previously in the pouch. While what I’ve got here is very enjoyable indeed, there something about it that strikes me as sort of… off. I don’t know if it’s supposed to be that way. If there is no contamination, however, it’s a very lovely tea indeed.

A definite sweet fruity taste. Probably honeysuckle, but I don’t know what honeysuckle tastes like. But, no chocolate taste. Maybe it is too subtle for me, but I have yet to have taste chocolate in any the teas which are supposed to have the flavor. That said, still a very nice, sweet, dark oolong.

No. I understand it is a plant that grows on the side of the roads and that people like to drink the nectar from the flowers.

My parents have one in their backyard, and we had huge ones along the fence of my elementary school. When I was little, my whole class would line up during recess and pull the nectar out of the flowers to eat.

This is a pretty bold tasting tea. I enjoy it’s strength and I will try to post a longer review when I have more time to analyze this one.

To me, it seems complex and I really like it.

If you desire a fine Wuyi oolong look no further than this deep and subtle nectar. The initial cinnamon mocha boldness is merely a ruse to entice the drinker into a humble and understated world of roses and stone fruits.

I definitely smell the cocoa notes described in the dry leaf. There’s also something gently spicy, like a savory spiced bread but not garlic-y.

195F, progressively longer steeps in the gaiwan starting at 15 seconds after rinsing.

The tea is a light copper color. I get tobacco notes in the aroma, as well as cognac. But the flavor is unexpectedly, naturally sweet. I don’t taste honeysuckle, more something fruity. Peachy. The cocoa/tobacco come through in the flavor as well. This is a fascinating tea — so many flavors and levels of complexity. The cup smells like honey after the tea is gone.

The second steep is more amber in color than copper. More stonefruit than chocolate/tobacco, but still with something brandy-like about it in the aroma. The flavor has all kinds of complexity. Angrboda was right about the chameleon nature of this tea, though the flavors I get aren’t what she does. I see what she means about the mint, though I don’t taste mint. I get a freshness in the mouth reminiscent of mint. Honestly, I could drink this all day — it’s smooth and easy to drink. Definitely worth the time. I’m sad that they no longer have this on the Teas Etc. web site.

Maybe I’m just in the mood, but this is coming across to me as one of the more enjoyable dark oolongs I’ve experienced. The third steep has a mineral hint in the aroma and a peach/peach pit smell. It does not smell like it would have any sweetness in the flavor, and yet it does, with a cocoa finish and a tobacco/brandy aftertaste.

Between the third and fourth steep, I started to notice what I think Angrboda meant by cinnamon. It’s not a flat out cinnamon flavor for me, but it’s reminiscent of that. Like having powdered cinnamon on the tongue but without the intensity/bitterness. All of the flavors mentioned persist into the fourth steep with almost no loss of flavor.

I’m going to put this through a few more steeps. It’s a wonderful tea.