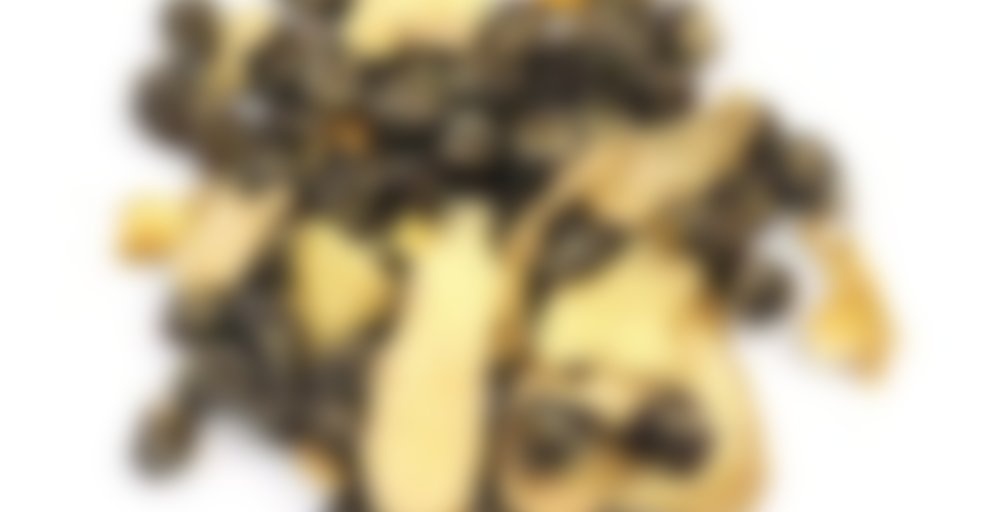 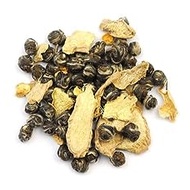 by Swan Sisters Tea
78
You

We source our Ginger from an organic farm in beautiful Maui and add this to our already fantastic Jasmine Dragon Pearls. A touch of orange peel adds to the exotic flare. Hawaiian Ginger Jasmine also makes a delicious iced tea for Summer.

Sipdown! This was a sample from… one of the Toronto tea girls (I can’t discern who) – thank you! I just stumbled across this in a random bag of tea from a swap, and it sounded pretty appealing, so I brewed it up. It’s just as I had hoped – a great marriage of jasmine and ginger, with neither ingredient overpowering the other. The jasmine is a bit more prominent, which actually surprised me considering that ginger pieces can easily overwhelm other flavours – but it may be that this was a product of my fairly short infusion time. Either way, this is a good combo, I’d have it again.

This is a tea I bought out of a mixture of curiosity and hope. Curiosity because jasmine and ginger are such contrasting flavours, the former cool and gentle and serene, the latter spicy and forceful. Hope because I have heard that ginger can be great for soothing upset stomachs, and I’ve got this weird stomach pain issue that I have yet to confirm a diagnosis for. Would having more ginger teas in my cupboard help?

The jury’s still out on that. However, I can say that combining ginger and jasmine together in a tea is just as unusual as I thought it would be. Here, small chunks of ginger root are mixed in wholesale with the dragon pearls. The description above says the tea also contains orange peel, but either I didn’t see any or I wasn’t able to tell the pieces of peel apart from the chunks of ginger.

How do I describe the smell of this tea? It’s obviously a combination of ginger and jasmine, but the interplay between the two is so odd. I don’t smell any harmony in this combination — there’s no sense of them being complementary flavours at all. Occasionally the jasmine wins out over the ginger, or vice versa, but overall the mix of sweet, slightly powdery florals and the assertiveness of ginger is, at best, idiosyncratic.

I took about 1.5 teaspoons of dry leaf and steeped it in 85°C water for 3 minutes. The resulting tea was similar in colour to the Jestha Jasmine above, though slightly paler. And like the tea above, the powdery-soft nature of the jasmine was apparent here. But the sweetness and strength of the ginger interfered in a way that’s hard to describe.

I know that there are people that will probably dig this flavour blend, but it turned out to be a hard sell for me.

Hmm, yeah. I could see a plain green mixed with ginger and orange peel, but not jasmine green tea. That’s a stand alone flavour as far as I’m concerned.

So I get the ginger and I can certainly taste the jasmine but what’s the “Hawaiian” element in this blend? It’s an okay tea but really nothing memorable or strong. However, I’m not rushing to throw it out which is more than I expected seeing as I’m not a lover of green tea, jasmine, or ginger.

Leaves: Dry – light sweet grass notes with a zinger of ginger. Wet – when the leaves ‘pop’ out of their shapes, they reveal long and sexy grass green leaves.

Notes: One of the flavors I consider to be a large part of my ‘comfort foods’ is ginger. I love it in all of it’s forms. Ginger is to me as chocolate chip cookies might be to someone else. (fun fact: the first time I had a chocolate chip cookie was in the 7th grade :P) so, for me, the big chunks of ginger in the sample package really excited me. I had only hoped that the blend tasted as good as it looked.
And it was! Although I do not like jasmine for the most part, it brought something else for my taste buds to focus on besides the ginger spice. The green tea was pretty good too, with the buttered vegetal quality that I find most satisfying in certain Chinese greens.
The first time I gongfu’d this tea, and then Grampa style’d it to work to sip down the last of it. I was able to get 4 small gongfu steeps out of the first bit, and then two good mug-fuls grampa style. After the third steep in my tumbler, I got a really overpowering ginger and an astringent quality from the green. Not the best type of tea to test out gramps style on, but the first two steeps were heavenly.

It’s too bad that my fellow tea sipper Roswell didn’t like this one from Amoda’s monthly box. I do know plenty of people for whom ginger is not ‘their cup of tea.’ Rightly so! Certain ginger ales are too over the top for even me. To each their own, I suppose.This may have been my favorite! I felt like the spice of the ginger wasn’t too overpowering if brewed right and it was very energizing and full of all the right warming qi. I may have to get more of this eventually!

My crazy tea twin VariaTEA signed me up for three months of Amoda boxes for Christmas, the first of which came last week. It looks like I’m going to be the first to review 3/4 of them since I had to add them to the Steepster database. I wonder, who else gets Amoda boxes? I’m interested in seeing other people’s thoughts on the offerings. I’ve already had one of the other teas in the box, but the note for that one is buried somewhere in my queue. This one I’m drinking currently since I don’t start work today until late this afternoon.

Honestly, I wasn’t excited to see this one in the box. It’s got a lot of things in it that I’m not really a fan of like ginger and green tea. I’m also usually pretty fickle towards overly floral teas too, though jasmine is one floral aspect that I handle better than others so long as it doesn’t taste chemical/artificial. The only way I could have been less excited about this tea is if they’d added raisins to the blend. But I’m still going to try it, and in as opened minded a way as humanely possible.

Visually, the leaf is actually very beautiful: This uses jasmine scented pearls for the base and then there’s lots of visible ginger and light orange pieces of orange peel that contrast the pearls and add colour. The dry smell is really heavy on the ginger in the blend; I can hardly smell anything else, but if I concentrate I can sort of smell the jasmine. Measuring out my cup I noticed pretty quickly I was going to have to really shake up the sample bag; everything but the pearls was sinking to the bottom!

My first few sips were hesitant. Initially all I could taste was ginger. It was pretty spicy too; and it was lingering long after I had finished the tip. But the more I drink my cup, and the larger I make my sips, the more I’m noticing the jasmine in the blend. And, it’s honestly a very tasty jasmine flavour; I don’t think it gets anywhere close to tasting artificial or like I’ve just sprayed perfume right onto my tongue. Instead it’s supple and sweet! Which is good, because this tea needed something to contrast the ginger, that’s for sure. As for the pearls; they’re sort of just contributing an underlying vegetal flavour; it’s easier to pick them apart in the finish of the sip, when the ginger flavour is at its weakest and is easing up. I don’t taste the orange in the blend; I think it’s just competing with too many other dominant flavours.

I don’t think I’d personally drink this again because I just can’t do this much ginger in one cup of tea; but surprisingly there were more layers to this one than I had imagined there being and it was decidedly drinkable overall. I think people who actually like ginger will love this one; there’s a very interesting juxtaposition between the spicy ginger and sweet jasmine; it works more than I thought it would initially!

I’ve been toying with the idea but it just seems so expensive. I’d rather just buy the full amounts off them, but then again, they tend to also pick expensive teas, or large amounts of something.