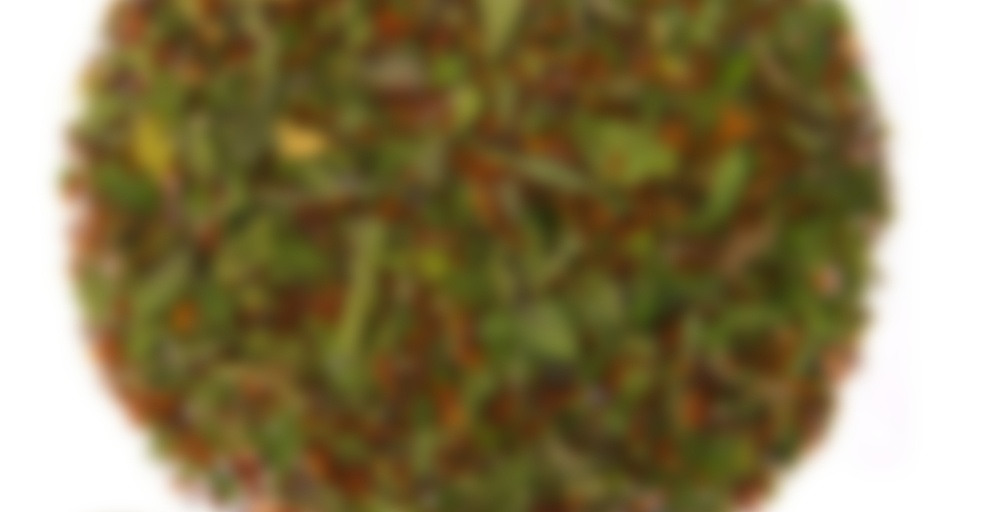 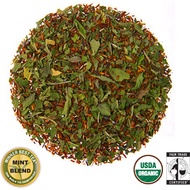 Peppermint Rooibos makes a deep red infusion with a smooth, rich mouthfeel and fresh minty sweetness that underlines the finer points of peppermint. The slightest touch of bergamot harmonizes these herbs, highlighting the soothing aroma of peppermint with the sweet and silky character of rooibos.

Has it really been 4 years since I have drank this?
Thanks to Azzrian I was able to have some more! Thanks so much! See other notes :)

I enjoyed a few cups of this throughout the day. My stomach was a little upset from last night’s Thai food binge. Oh man, I love Thai food! The family that owns the Thai joint that I go to uses a spicy scale of 1-5, five being “ethnic”. Of course I’m all about eating as authentic and ethnic as possible, so I went for the big 5. The server smiled.

My husband and I go to this restaurant once every 1-2 weeks, so they know us well. Well enough to send us a Christmas card in the mail, as a matter of fact. (We’re good customers.) It was totally worth the burn…and this tea did help soothe. At least I think it helped…maybe I’m developing a cast iron “ethnic” stomach.

Either that or chronic heartburn! ;D

Sawatdee ka! That’s about all the Thai I know. I used to know how to say “I am hungry,” but it’s been replaced in my head with an inappropriate Chinese phrase. Now you’ve got me craving Thai food. Funny how mint really helps calm your stomach down. It’s one of the only “herbal remedies” I’ve found to truly work on the regular.

I like this tea, but I was hoping for more mint, less rooibos. It’s got an earthy backnote to it, and the light, clean note of the peppermint. However, I am enjoying this cuppa, and will be quite happy to polish off this sample from Lena.

Boiling 5 min, 0 sec
Yours I Like This
8 likes
2 comments
Edit

I like Celestial Seasoning peppermint. You know, the one that everyone says blows their heads off….

What am I doing drinking a blend with both peppermint and rooibos in it? The word “bergamot” drew me in, much like the glittering windows at Tiffany’s did the other day. Also they were out of earl grey and I was desperate. Anyway, peppermint rooibos. Eh. I think the addition of bergamot is a little pointless to be honest – as per usual the peppermint overwhelms and the rooibos gives it that piney rooibos aftertaste. Yep. Regret in a cup.

This is a nice mint tisane. Lots of peppermint flavor. The rooibos is there but it’s light. This is wonderful after a day of indulging in too much good food and way too much sugar. Mint is a wonderful thing.

My sister gave me several different Rishi tea bags, and I’ve been happy with them so far. They’ve been very convenient and great quality. I’m looking forward to giving the rest of them a try.

Boy am I really milking this one! I have enough for one more serving, and I’m going to be resteeping the leaves I’m sipping up now. I have completely and utterly fallen in love with you, Peppermint Rooibos. I love everything about you! You are so versatile. You love cold and hot. You are still great room temperature. I changed my rating from 92 to 100!

I bought some Peppermint from Adagio in the hopes of recreating this in some way.

This blend, however, has “natural essential oils of bergamot and peppermint” so I’m assuming that enhances the flavors. Anyhow, I have this strange idea about trying to add a dash of MILK to this! I’ll try it on my second steep! >_<

Great alternative to plain old peppermint. The rooibos adds a little more body, without competing. This is perfect when I’m avoiding caffeine but still want to feel refreshed and alert. No need for sugar even. It also tastes similar to Foxtrot, but lacks the sleepyness inducing chamomile element.

This rooibos has a nice, refreshing mint aftertaste. I consumed it while watching A&E’s, “Storage Wars.” Like the personalities on the show, this beverage is full of character!

I love Rishi Tea’s organic peppermint tea and also its organic rooibos tea so I thought that this would be a perfect blend of the two. However, I was most definitely wrong. The tea doesn’t have a strong enough peppermint flavor and honestly the blend tastes “off” and a bit bland (even the first steep). I will not be drinking this again and I wouldn’t recommend this tea to others. You’re better off making a hot cup of their peppermint tea!

Holiday Tea-son! This isn’t exactly a holiday blend, but the flavor seems to fit in well, and I’ve had this sampler around since fall of 2017 and want to use it up. It’s a blend of rooibos, peppermint leaf, and bergamot oil, but it smells really, really minty; I’d be hard-pressed to believe this is anything other than just peppermint leaf, it is so strong! Though it does have a sort of sweet briskness to the aroma, I suppose. I was just going to brew the whole sampler in my teapot, but decided to split it into two teabags and make two servings out of it after smelling how strong the mint was coming off.

Steeped up, I was actually somewhat surprised to see it was actually a proper rooibos red, and in addition to smelling the strong mint, I could smell the bergamot now as well. In the past I have never liked bergamot-infused rooibos, so I’m actually a bit curious if the mint will add enough to the blend to temper it a bit. The flavor is… hmm. It’s… interesting? I still think I’d prefer it without the bergamot, but it is certainly better with the inclusion of the mint. The mint is a very dominant flavor, and the cup almost tastes a little creamy… but then this bergamot zing sort of hit late in the sip, and it almost feels slightly sour against how cooling and refreshing the mint has left the mouth. It just doesn’t feel complimenting to me at all. In fact, the more I sip on it, the more the bergamot tastes downright soapy in my mouth, against the really refreshing pop of mint.

Ya, I just don’t like it. It just isn’t a flavor combination that is working for me at all.