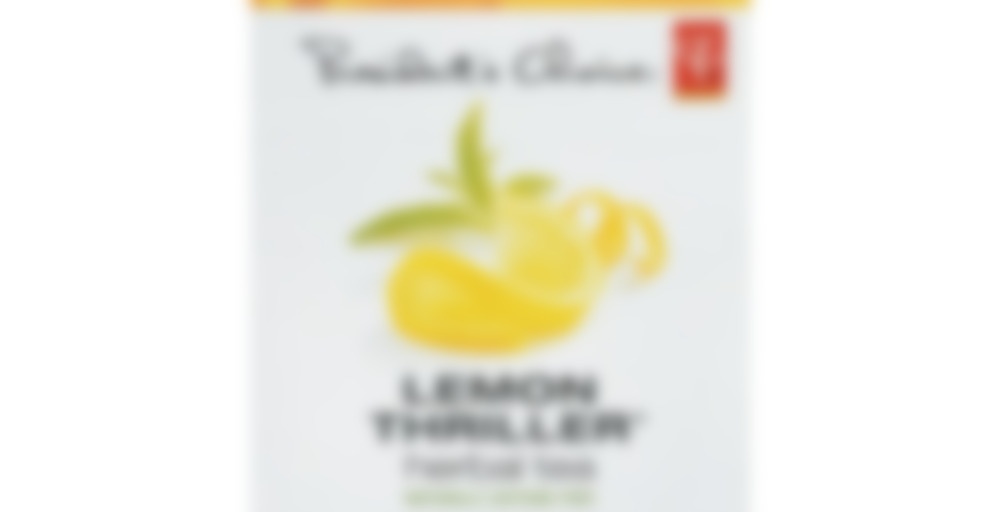 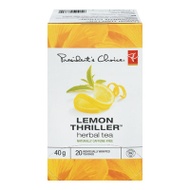 by President's Choice
75
You

PC Lemon Thriller Herbal Tea is a lively, fragrant refreshment with lemongrass and natural citrus peel. Enjoy it any time of the day, hot or iced.

Thank you Lala for this tea. It’s another unbelievably hot day and after making 8 new pendants I have decided to call it a day. The problem with making wire necklaces is the smell your fingers have after a couple of hours of working with various metals. :( Copper is particularly bad.

A quick scrub of my hands while I prepare this tea. A quick note of the tea bag, it smells herbal and sweet but not lemon per say. Citrus/fruit yes but lemon no.

Once steeped it smells lemony and very sweet, like a lemon flavour and scented hard boiled sweet.

Flavour is not as thick as I was expecting which is a nice surprise. As well as the lemon I’m sure there is a hint of orange in there too and it’s more sweet than sour. It tastes a little artificial but overall I don’#t think it’s bad at all. Will try this iced soon.

What I like the most about this tea is no extra work is required. You boil water put in the tea bags and let it steep the whole time if you wish. It taste just as good cold as it does hot. I have been looking for a very lemony tea for quite some time and this is the most lemon flavored one I can find. What I can do is make a large mug and sip on it all day long while I am at work.

Tart and tangy! I didn’t get “soothing” from this tea, it reminded me of lemonade. This would probably be really good iced on a hot day on a patio somewhere. :)

A sample from KittyLovesTea. Last cup of the day at work. I found this one a bit of an odd duck while hot, but as it cooled it seemed to settle down. It brewed up pretty dark, which suprised me. It’s a herbal, so I just dumped the bag in boiling water and hoped for the best. I found chicory an odd ingredient here, and it might be responsible for the slightly weird flavour I detected initially, but it’s an undeniably lemony tea. It’s a little sour as well, so quite accurate lemon, rather than over sweetened or candied lemon.

I think this one would be really refreshing on a hot day, and even better cold. As lemon teas go, it’s a good one. I’m not over-awed or anything, but it’s a nice tea to have tried. Thanks to KittyLovesTea for sharing it with me!

I quite like the zing this tea has. I have spent a lot of money and many boxes/bags/tins of tea to find a good lemon tea that does not taste artificial or have a bad aftertaste. I find it soothing on a sore throat, or as a thirst quencher.

One of my personal favourites!
Any citrus-lover’s dream, the thriller is vibrant, refreshing, and soothing; perfect for an afternoon pick-me-up or an early morning wake-me-up!