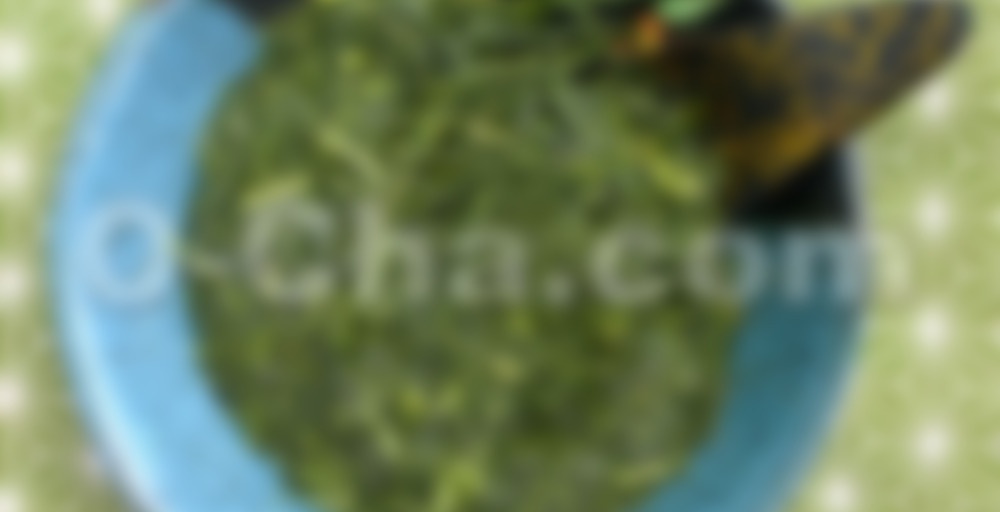 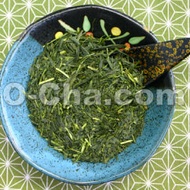 From Shizuoka, a unique breed of Japanese green tea grown organically. A first rate, first harvest, deep steamed green tea, the high quality is obvious from the first sip. Strong “umamai” sweetness, less astringent and mellow. As with many organic green teas, it is single estate and is not blended. Harvested from the first round of young spring leaves, it is certified organic. Nitrogen flushed and vacuum packaged, as fresh of an organic green tea as you can get.

This tea is really nice. I was a little weary of organic teas, as I heard they could be less flavorful, but this one definitely isn’t! First infusion is a nice yellow-green, with a sharp but sweet taste. Second infusion is cloudy, soupy and umami-packed, as it should be. The price is also cheaper than some other teas, while still having all the flavor.

The tea was packaged in the usual type of bag, however it seemed to be vacuum packed, as it was air tight and you could feel the tea packed together inside. On the packaging is a drawing of what I assume is the owner of the tea farm, along with her son. It’s nice to see the faces of the people who dedicated their time to making your tea.

Oh no, no, no, no no! I personally believe that organic teas (well organic anything really) is SO much flavorful. Infact, I’ve never heard anyone say organic things are less flavorful.

I have heard the exact opposite actually, that organic (japanese) teas are less flavorful. I wouldn’t know from experience, but certainly are conflicting opinions out there.

Really wow? The only two organic Japanese teas I’ve had are sencha and matcha- and I’ve foud them to be much more flavorful- especially matcha. And to plug LeafSpa today, they’ve got a great organic ceremonial grade matcha!:)

Oh, I don’t doubt your experience in the least. Just pointing out I’ve only read the other side (that organic = sacrifice of flavor) on the internet. However, having never tried organic, this makes me want to compare and see for myself!

Now decaf on the other hand…

Shinochiba (and Martin Biship) you guys should try the steepster select item for today too- It’s organic and I deem it 100 worthy!:)

How much are you getting paid by them? (jk!)

This tea has been offered at O-cha since I can remember. I have to say upfront, I have very mixed feelings about this tea. It’s very ordinary and probably overpriced, as there are less expensive teas on that site that are much more interesting…for example…the Sayamakaori Organic Sencha and Zairai Organic Kirishima Sencha.

Also…after drinking lots of Chinese green tea the year, I feel I may be a tad spoiled by the intactness of those leaves, making be a bit critical of senchas. I’m finding even most light steamed teas cannot compete with wholeness of Chinese green tea leaves. It would be nice if the Japanese could get over their obsession with uniform leaf size—their excuse for chopping up what would have been intact leaves into lawn clippings.

Poor aesthetics and mediocrity aside, the dry leaves are pleasantly aromatic – as dried sencha should be. Actually, that’s probably my favorite aspect of this tea. If smell could be a drug, fresh sencha leaf aroma would be meth.

Admittedly, this is a well-balanced sencha with some interesting moss and mineral notes that give it some character. There’s also a fresh sugar snap pea note that I like. I think the opaque, mellow tea soup has a comforting quality to it. Do I recommend this tea? If fukamushi is your thing, you’ll probably like it. While I’ve had better, I’m still glad I tried this one.

Good for three steeps according to the label, but the last was pretty weak and so I usually let it go the full 2 minutes rather than the 1.5 suggested. I appreciated O-Cha putting the suggested steeping times right on the label which were 1.0, .5 and 1.5 minutes. Buttery aftertaste was especially enjoyable.