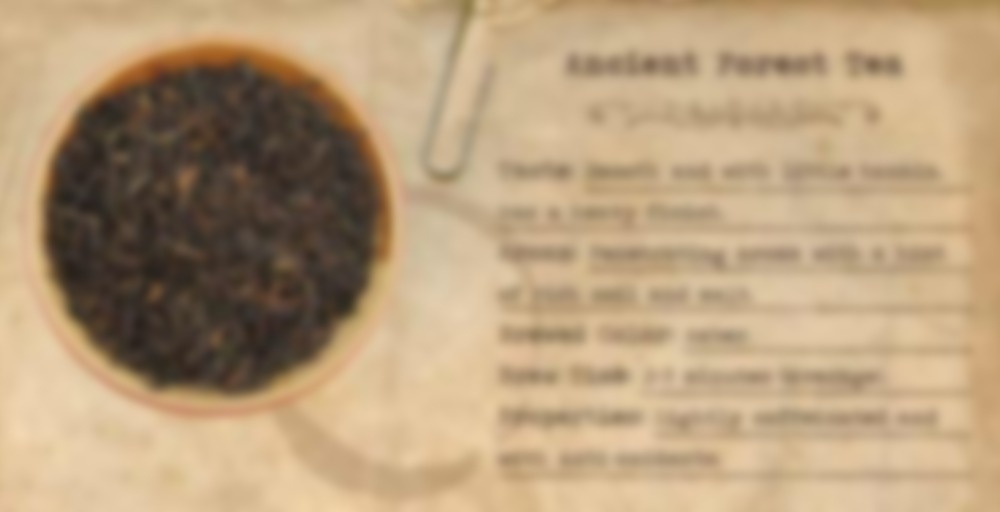 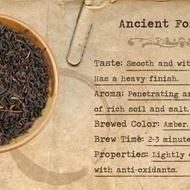 by Mountain Rose Herbs
84
You

This handsome tea is worthy of all our esteem and veneration because it comes to us exclusively from stands of protected ancient growth tea plants in the Yunnan province of China, all of which range in age from 500 to 2,700 years old. The most alluring aspect of this tea is the deeply penetrating flavor and aroma that it imparts, which is unlike any other black or green tea on the market. Bold, dark and inviting; this certified organic and fair trade tea is not to be missed.

Backlogging from the last two days…and a sipdown!

This is a lovely Yunnan … smoky, rich, earthy and sweet. Lovely malt tones. Even though the description depicts an Oolong by saying it’s partially fermented … it tastes much more like a black tea than either an Oolong or a green. I do taste a lightness to this, hay-like and sweet, but, I still find it leaning more toward the black tea type.

It’s good, a fairly strong amount of astringency toward the tail. Enjoyable. Thank you TeaEqualsBliss for sending me a bit of this.

Good, review. I am a fan of Mountain Rose Herbs but have not made purchase as yet. I even wanted to volunteer with them last year 2011 at their Herb festival in Oregon but no money to get there. At least I think it was them. I had submitted the paper work and sent it online to them; so they had me on paper anyhow. Always revealing of sort.

Ancient Forest. That sounds interesting. The name alone sounds appealing to me. Something that sparks the imagination. I like that. Apparently this is a Yunnan tea, so I’m curious if it will taste similar to the Yunnans I’m familiar with. Sort of pepper-y/smoky and with spicyness and sweet hay notes underneath.

The aroma is certainly similar. It’s sweet and haylike, with some prickly spicyness teasing the nose. But it’s also different. It’s a lot more grainy and rye bread-y than what I expect in a Yunnan tea. It’s actually so much so that I’m reminded more of the beloved Tan Yang than straight up Yunnan.

That’s really interesting. If one was to blend Tan Yang and your average Golden Yunnan 1:1, I wonder if the result would be something that smelled something like this.

But that’s really where the Tan Yang similarity stop. The flavour is very Yunnan-y, and the grainy aspect is not as prominent here. It’s still there, but it has retreated to the background, making place for that sweet hay and spice that is typical to the region.

It’s quite smooth and only a little prickly on the swallow, but what you find here is a very definite note of pepper. I have previously been unable to decide whether I experienced that particular note in Yunnans as more pepper-like or more pseudo-smoky, and I vascilated back and forth between the two with each Yunnan I drank and sometimes with each sip from the same cup. Here, it is very definitely pepper and there’s absolutely no doubt about that.

It’s very definitely a tea with all the typical Yunnan characteristics, but it’s utilising them in a way that just feels different. Older. More experienced. This is like the wise old grandmother, where the Golden Yunnans are the more adventurous and sometimes rash youths.

So far, I believe this is the Yunnan I have liked the best so far. It’s a hearty and full-bodied tea, and it’s just interesting. Even after having attempted to analyse the flavour profile, it’s still like I can’t get quite finished tasting it.

I love when names evoke interesting thoughts and fantastical places. I have a tea called Mermaid’s Kiss that I just love as much for the name as for the tea!

Tea of the morning for me.
For some reason, as soon as I awoke, I knew I wanted this tea.
A dark amber brew with a nice rounded flavor.
There is a bit of Smoke and Leather to this tea that I really enjoy.
The tea is almost Manly.
It is Strong without being harsh, it satisfies with simplicity and it knows how to wake me up in the morning….everything a girl is looking for in a Man…Er, In a TEA, yes in a tea;)
Brewed in my Bodum.
The first two infusions stay about the same, after that it starts getting milder.
It was drank without milk or sweetener (how I drink most all my teas)

This is soothing. Can be somewhat complex, if prepared in a gaiwan and not over-steeped. Many small cups may be prepared from the leaves. It’s better than average.

I had a recent volunteer gig in a hot and humid spot. I knew I’d be on my feet a lot, so I brewed up a batch of two parts of this tea, and then added 1 part each spearmint and peppermint to the liquor, and steeped that overnight in the fridge. Added a little agave, ice, and lemon; and had an all-day pick-me-up that saw me through some challenging work.

This is one of my new favorite teas. I love it. I like all sorts of different teas, but I’ll pull this one out if I see it first. The smooth flavor and “forest” like feeling you get from it makes you want to sit on a big redwood tree limb and enjoy a cup with a hobbit.

I am fairly picky about my teas. I want to be able to enjoy them without all the additives of sugar, honey or cream so the bare flavor has to stand on its own. And this one does. I usually like orange pekoe tea by twinings but needed something I could enjoy in bulk without the paper bag flavor and cost. Not to mention, these are ORGANIC! Mountain Rose Herbs sell their tea by the pound. I ordered the 8 oz size first and went back and ordered the pound. If you are a person that likes that roasted tannin flavor without a lot of other added flavors, you will like this.

Smell: smells like old wood growth bark.
Taste: time or sun roasted flavor leaves that have been hiding in the forest undergrowth for quite a while. Slightly fermented flavor as well but not overwhelming. More like a slightly fermented leaf flavor that has been hiding under layers of leaves in the forest.
Color: Amber
Time I prefer to steep: 8 minutes (directions say 4 minutes)
Water: I use water from my well and it is 165 degree.
Brewing system: I use a For Life brew and a ceramic teapot.
Additive: I sometime add raw honey.