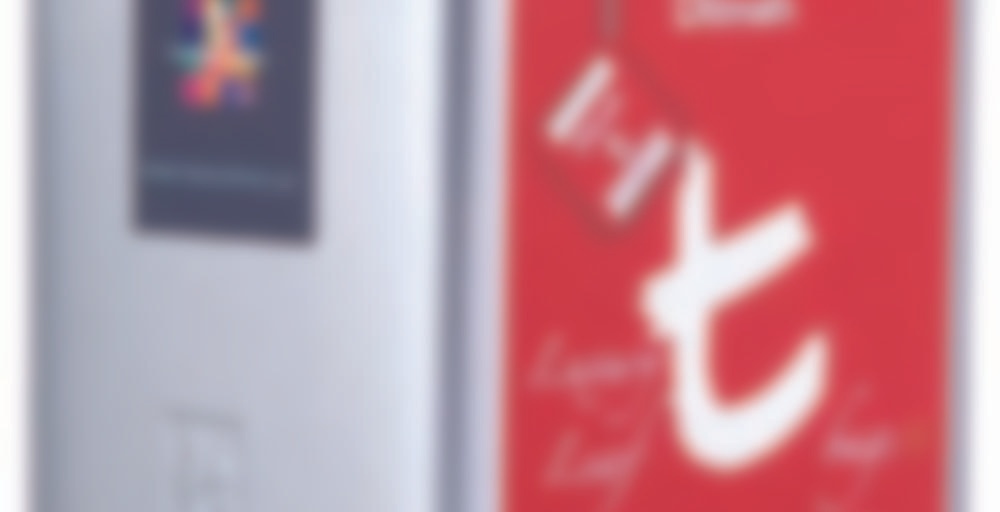 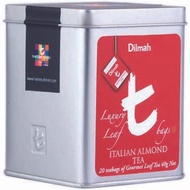 A medium strength Ceylon Tea, fragrant and with a slightly sweet almond finish. Mid-elevation Ceylon Tea from Dombagastalawa Estate fused with the bitter-sweet flavor of Italian Almond. The slightly malty Ceylon Tea produces a deep amber infusion which is enveloped by a deliciously piquant aroma of amaretto. The tea has a nutty, sweet edge with a rich body. Ideal taken with sweet cakes and pastries, or for something different, as a t-Shake, brewed strong, cooled and poured over vanilla ice cream.

I think this is from the tea box, but I’m not positive. If I received this in a swap from someone, thank you!

This morning I was in a rush to get my son out the door and to camp, but I really needed one more cup of caffeine. I went digging through my tea bags and came up with this. While the tea was hot it was difficult to taste the almond. However, the base tea was excellent. Very smooth and rich. When the tea had a chance to cool a bit the sweet almond flavor arrived in a big way. It became something close to a dessert tea. The taste reminded me of biscotti or pastry. Delicious!

For such a little tea bag this is a big tea. I’m going to have to hunt down more of this one.

Another new tea! Seriously though, I really have to stop buying tea. I’m in job limbo right now and playing Russian roulette with my bank account by buying tea. Grrr… I have no self control.

Anyway, I had never seen this brand before. I bought it after consulting Steepster while in the tea/coffee section of the grocery isle this morning, but really the words “Italian Almond” sealed the deal for me. I pretty much love anything almond-flavored and Italian, well… I’m pretty sure if I hadn’t married my husband, I would have sought out an Italian man.

The first thing I noticed upon opening the foil wrapping of the “20 luxury leaf bags” was the smell – amaretto filled the nose. So far so good! The tea bags bugged me a little. They felt like dryer sheets, which to me belong in the dryer, not my cup. After brewing a bag, it became even more weird. Kind of like a tough cocoon. That part I’m trying to not dwell on…

This is not a complex cup. Someone likened the taste to almond syrup, and I’d agree with that having added sweetener to it before even trying it. The taste is not strong enough for milk on it’s own, but maybe if it were brewed double strength it’d be alright. (I’ll try this sometime.)

So the tea itself is pretty good – not fantastic, but I like it and would probably pick up more, especially at 24¢ a tea bag!

Thanks Will Work For Tea for the generous package of tea this was included in! I definitely wouldn’t call the steep color of this amber! It is a strong black tea. When I tasted it, I could tell this was a ceylon before I looked at the description here. I’m proud of myself – I just figured out the ceylon flavor a couple weeks ago! haha. To me, the ceylon has a very strong flavor, almost too strong to add any other flavors to. I couldn’t really taste any almond here. There were TWO sips that there was a bit of almond. That’s weird. Even when the tea cooled, I couldn’t taste any other almond. But it works as a black tea anyway!

Another new offering from my grocery store’s tea section. It’s bagged but this was a new brand that I haven’t heard of, so I thought I’d give it a try. I picked out this tea because I like almond flavoring… not so huge on almond nuts but the flavoring? Awesome.

When I opened the little foil bag, I was hit by the strong (and delicious) smell of pure amaretto. Just what I had been hoping for! When I took out some tea bags, though, I couldn’t help but think that they looked a bit like they were made of dryer sheets. That’s kind of uncool. Mental note: smell the bags, don’t look at them.

After steeping, the tea is a much more tea-like smelling creation. It smells thick, woodsy, malty and occasionally I get flashes of something that smells similar to dark chocolate or cocoa, but just a flash. And waiting patiently behind this very strong and bold tea smell is my adorable little amaretto. I hope the same is true for the taste.

I don’t have huge experiences with Ceylon, not straight at least, but this taste doesn’t remind me of Adagio’s Ceylon blends (or any other Ceylon-based flavored tea I can think of). It actually reminds me of a CTC that I had from Lupicia a while back – thickly textured, malty, a little bit of sticky sweet. (I just looked it up and I’m thinking about Silonibari BPS, which I believe is an Assam.) The amaretto flavor kind of flits around playfully; sometimes it’s at the beginning of the sip, sometimes the end, sometimes I get it all throughout the sip. It’s definitely taking a back seat to the tea but not so much that it fades away.

I do think the tea might be a wee bit strong for the lighter almond taste, though, because the end taste of the tea is so thick and coating that it seems more working counter to the almond than in conjunction. The almond shows up more when I take multiple sips instead of resting in between. I think resting gives the tea a chance to build up its thick, slightly bitter (in a wet, nutty way) end notes which totally drown out the amaretto. Sip-sip-sipping results in more sweet, light almond.

Overall, not bad but it could use a little something. Since this reminds me so much of Silonibari BPS, which turned to flat, boring cardboard when milk was added, I don’t think I’m brave enough to try it with milk. Mentally, I’ve already decided that would ruin it. But trying it with sugar seems like a good idea…

Ah yes, a good idea. It kills off just enough of the nutty bitter that I’m able to enjoy the almond more. It’s still not overwhelmingly almond, but it’s not distractingly wet-bitter at the end, either. Much better. I also seem to drink it faster which helps with the lack of nutty-bitter aftertaste. Overall, the addition of sugar seems to make the tea/flavoring ratio seem a bit better balanced instead of the big bully of the tea running roughshod all over the sweet, innocent little almond.

As always, it is nice to come across a flavored tea that still lets the tea be the star. I’m not sure that they picked the best leading actor in the tea world, though, but since sugar tempers that a bit, I won’t complain too loudly. Overall, a nice tea… and one with a pretty serious caffeine punch. (Seriously, my hands just started trembling a bit and I only had 6oz. Usually only lots of sencha or a stout Assam give me the shakes. Wowza.)

Okay, so this wasn’t really great with milk. It tastes more of cherry or torani almond syrup that warm roasted almond, which wasn’t bad when straight but meh with milk.

I was given a single sample of this tea and now I always have it in my cupboard. I’ve always had it with milk and while it is a little weak for my taste the almond flavour makes up for it, the taste is almost like eating marzipan or an almond biscuit with a plain cup of milky tea. However I would definitely recommend seeping the tea bag for as long as possible.

I am a sucker for almond. Whenever I travel to colder climes, if I see a coffee cart on the street I’m all over an “almond steamer”….which is just basically steamed milk with Torani Almond syrup. How could I go wrong with this tea?

I couldn’t. Opening the foil packaging…well…it was NOM. Amaretto and nice tea. After steeping for 4 minutes (I knew I would be adding milk and honey)there wasn’t much almond smell, but after I added a bit of the above accoutrements, and took my first sip….well….it was NOM!!! If you drink flavored teas on a regular basis, you’ll be able to tell that there is a NICE tea backing the almond flavor. It’s not the usual garbage that they used for flavored tea. The ceylon is lighter and brighter than the tea used in most. It lets the almond flavor float a little lighter on your tongue….like a flaky pastry…..NOM. I’ve already ordered two more tins from Amazon. I’ll be keeping this in my pantry as a gorgeous alternative for tea and toast!

Horrific. Easily one of the worst teas I’ve ever had to date. It smelled heavenly, but drinking it? Nope. Bitter and artificial tasting.

i’ve been mourning the loss of lipton “almond pleasure” tea for 15+ years now, and i am happy to say that i’ve found a decent replacement in dilmah’s “italian almond”. while i agree with other reviewers (both here and on amazon, where i ordered this tea) that the flavors of this tea are not complex, “almond pleasure” was definitely not complex either… so it doesn’t bother me very much.

after drinking it as-is the first few times, i had the idea of cutting the tea bag open and mixing the leaves with a heaping teaspoon of “coquelicot gourmand” from dammann freres. i think this will be my preferred combination from now on. the almond taste comes through quite delicately at the end of the sip, giving “coquelicot gourmand” a bit of an almond boost as it already has marzipan flavoring.

the tin smells heavenly when you open it. i wish i could purchase this tea in loose form rather than tea bags, but thats nothing a pair of scissors cant fix!