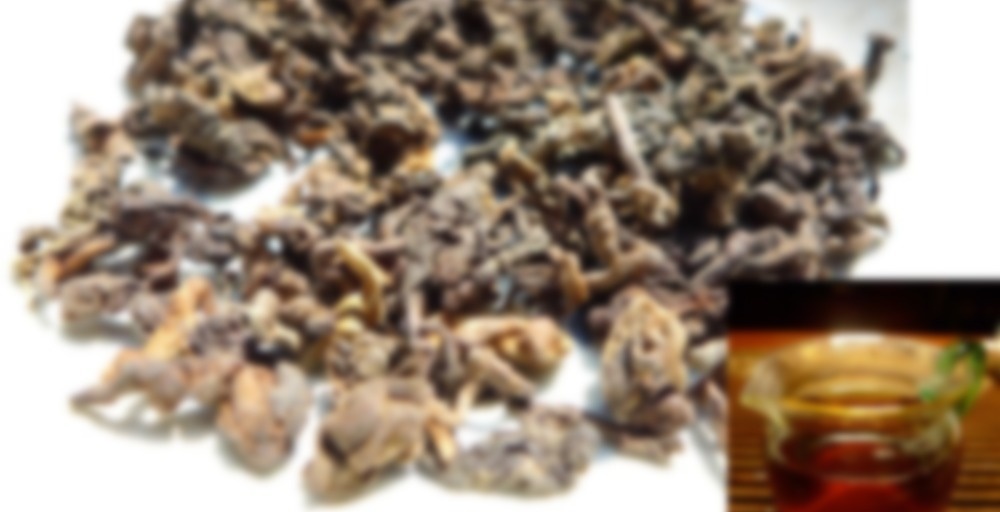 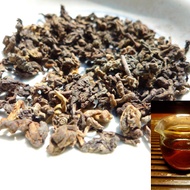 This truly is a beautiful tea… The ‘Elixir of Immortality’ or Bu Lao Dan is very special. This tea is produced on Wu Yi Mountain according to the traditional formula of an ancient Taoist sect. These Taoist renunciates believed that this tea would help to prolong their lives and aid in their practice of austerities. The processing of this tea is overseen by a Taoist master and takes between two to three years to complete. Basically it involves exposing the leaves to the sun and moonshine in certain places, for set periods of time, and then storing the leaves in large earthenware containers. This process of exposing and “resting” the leaves is repeated many times over the period of years, and the results are nothing short of remarkable. Those who have been to Wu Yi know that this is a very special place – the long time stronghold of Taoist and Buddhist sects. The experience of drinking this tea is something akin to drinking in the wisdom of this sacred Mountain. Much like the the nine peaks of Wu Yi, this tea is strong, enduring, and suffused with a subtle yet forceful power (subtle for some – not so subtle for others).

A brewing note: This tea needs to be steeped with very hot water (100 degrees Celsius) in order to release the full flavor and present the Qi properly. An yi xing pot is also necessary in order to get the most out of this extraordinary tea.

Prayer to the immortals

Stinging Leaf Of Immortality From Sapa

This is a really interesting tea. I don’t think I’ve ever tasted anything quite like it. It is earthy, woodsy, and slightly smoky. It is malty and a little bake-y… and even a little buttery. I can taste distant notes that have hints of flower and fruit to them. There is a deep sweetness to this.

Wow, this sounds really interesting, I’m going to add it to my “teas to try” list as well! :-)

I’m not gong to lie, I was expecting something quite different than what appears in the cup. Maybe it was the lofty title or maybe the fantastic tradition behind the processing that caused me to have a delusion of grandeur toward this tea. Please don’t get me wrong, it is by no means a bad or even average tea. It’s just not what I expected, that’s all. That’s probably my fault.

Anyway, it is very reminiscent of a mild cooked puerh or aged sheng. The mouthfeel is very smooth and the flavor profile is mild, earthy and warm. It slides in nicely with some of the better dark puerh I’ve had, in fact after the third steep I blended it with some near spent Menghai Orange-in-Orange and the result is affirming to the quality of both teas.

And as an update I’ve found a very interesting dimension to the flavor profile of this tea. Underneath the aforementioned similarity to better puerh is the thick and earthy tone of grilled mushroom. Portabella, to be exact. It adds a meatiness to the liquor and more depth than I had realized. As the seller notes, a dedicated Yixing pot would most likely coax the best possible flavors out of the brew. This, more so than any other tea I’ve had, would seem to benefit most from such nurturing because the best flavors to be found in this tea are also the most subtle. An Yixing would enable the flavors to compound and concentrate wonderfully, I’m sure, though I wouldn’t go so far as to derive notions of immortality from them.

There is only one path to perfect eternity, my friends.

His name is Jesus!

This is VERY Dark for an oolong post infusion. It almost tastes like a black tea as well! There is a bit of maltiness to it. The taste is quite powerful!

Wow…with a name like “Elixer of Immortality” it’s gotta be BOLD. :)

The tea name caught my eye.

Definitely intoxicating, in every sense of the word. This tea had naturally occuring aromas and flavours that overpowered the senses. Poured from an Yixing teapot at near boiling water I nearly couldn’t put my smelling cup down. The aromas were like a rainbow wafting between honeycomb, plum blossom, and spring flowers and back again and they seemed to linger forever. The flavours were sweet with extremely long lasting hui gan. It wasn’t until hours later and after I’d eaten some pizza that the flavours finally started to leave my tongue. This tea may not last long on Cloudwalker’s main page because it is so fine. As for the chi, it quite literally cleanses the mind of all extraneous thoughts and allows a zen calm to fill the body and spirit and left me in a state of total relaxation. This may very well be one of the best teas I’ve ever had (and I’m usually a pu erh kind of guy). Expensive but worth every single dime.

I appreciate the clarity of your tasting notes. Especially the scent and where the teas are experienced on your tongue. Thanks for making it even more difficult to choose the next tea! ;-)

I’m glad you enjoy the tasting notes! It’s always fun to sit down and write about the teas I try. :)

oooohhhh. i love this tea. one of my all-time favorites. bitter, like a stormy fall day after a break-up. i love this one.