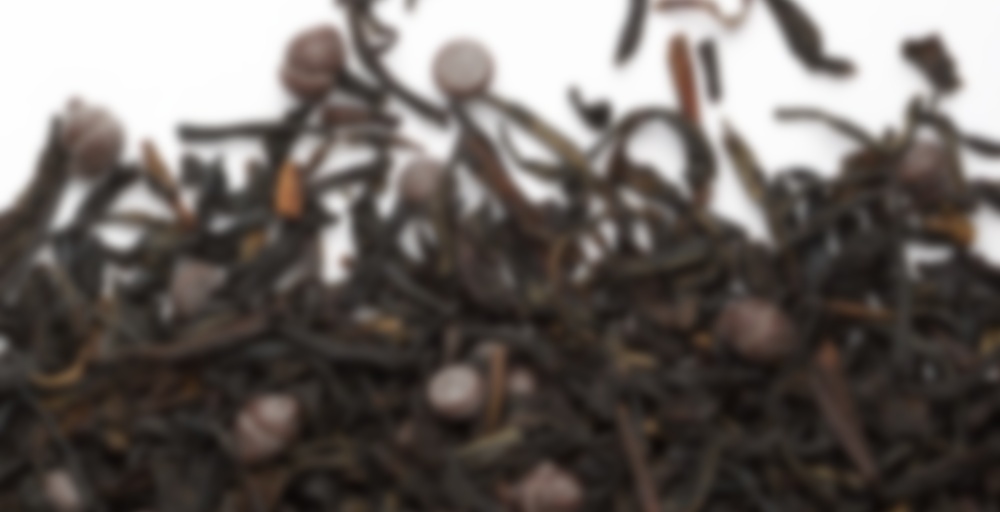 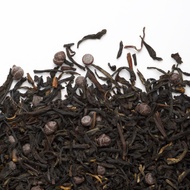 Perfect harmony between tea and chocolate. Cocoa butter, vanilla and black tea make this a desert in itself. Try after a meal or as a treat.

I’m glad I picked up a sample of this one to try. First of all, Lexa loved it, yay!

I did enjoy this, and it certainly hits the mark of being a chocolate tea. It’s almost like drinking liquid chocolate! The only downside for me was that it was almost too sweet at times. Which was more dependent on my mood, probably. Otherwise, the base tea is smooth without astringency. And even with the sweetness, the flavour is still extremely well done and you can tell it’s a high quality product.

I am really enjoying these Camellia Sinensis teas! I would certainly order another sample size of this one to have around.

I chose this sample from VariaTEA because I thought it would make a good strong morning tea before work, but when I saw how dark it brewed up I was a little nervous. It’s actually quite smooth, and not really astringent at all, but it hasn’t aged the best and I know that’s my fault and not the tea’s. I’m almost through all of my little plastic baggie samples, and aim to be completely done with them before the end of next month. Most of them have held up pretty well but a few, this one included, have become victims of age. There is a definite rich chocolate scent lingering in the air around the cup, but sadly this doesn’t translate into the flavour. Plain it’s more a vanilla tea, a pinch of sugar brings out the chocolate slightly more and a splash of milk doesn’t do much but give it a richer mouthfeel. I’m annoyed with myself because I bet this tea would have been just what I was hoping for today if it were fresher. Rating without factoring in the fustiness.

This tea tastes a lot to me like the Coconut Puerh from Republic of Tea but with a deeper chocolate flavor.

Nice Pu, not into chocolate flavors unless milk is involved. I tried all combo. I steeped it with water alone which did not give me a good choco flavor, then added a little milk, again to watery, added 1/2&1/2, no go, then steeped it in hot milk but the Pu flavor was dissipated and not enough of the choco. In the end I got what I kind of wanted by adding extra cocoa to a 1/2 water 1/2 milk. Too much work for me. Plus wasted alot of tea in the process. I like Camellia Sinensis just not this one.

I should go to sleep soon; I know Brenna’s gonna have me up at like 6 or 7 in the morning and at this rate I definitely wont be well rested for that…

Currently she’s half sleep talking and half snoring. It’s kind of weird being able to hear someone else sleeping, if I’m being honest. I mean – Tre is relatively within earshot but enough that I can hear the guttural noises he makes in his sleep. For a while she was talking in her sleep about making me a suit out of rice…

Earlier tonight we played a game called Geek Out with Tre which was fun; I was kicking ass at all things comic book and Tre was doing the same with Sci-Fi TV shows. Brenna owned us both when it came to naming sciences she kicked both our asses. But she was definitely getting upset that she wasn’t doing as well, so I had to throw a few rounds to halt the waterworks. Someday we’ll be ready for Monopoly, but not today. It was fun though!

Anyway, thank you Sil for the sample! I keep seeing this on the CS website and it looks interesting but not enough to order any, so sampling is so very, very welcomed! And, it definitely smells good – a little earthy with a coco puffs cereal sort of thing going on.

The smell is awesome; very sweet and robust with chocolate, vanilla and earth notes. However, it’s not translating into a rich, full taste – though the taste certainly isn’t bad either. I definitely get a rather muddy, thick Pu’Erh flavour with some natural sweetness and a little malt perhaps? The chocolate comes off a little bit powdery the way some French teas do – and the way the malt and vanilla play with this it definitely makes the Coco Puff cereal comparison a lot stronger.

It tasted better as it cooled down; the chocolate and vanilla flavours appeared to get stronger. Because of the way I’m picturing this as cereal, and with the cooled down temperature I can definitely see it working as either a hot or iced latte – if I had more, I’d try it that way for sure. As is, I enjoyed this one even if it wasn’t what I was expecting at all. I don’t think I’d purchase it – but I’m happy I sated my curiosity!

Dry scent is of earth and dark chocolate, I see lots of little chocolate chips in here, it instantly reminds me of a less spiced version of Della Terra’s Chocolate Chai Pu-er. I wonder, if I added a bit of coconut, would I be able to make it taste at all like David’s Tea’s Coco Paradiso? Gah, I loved that tea so much, I miss it!
Not a lot of change in the smell of the wet leaf after it’s steeped here, except for the Pu smell being a bit more pronounced.
I was expecting a bitter edge to this one, but I’m not getting it, there’s barely any astringency, and if there’s a little bit at the end of a sip, it reminds me all the more of dark chocolate. I don’t taste any vanilla at first, but after I swallow, that’s what lingers most. There isn’t a lot of layers to this tea, as far as I can tell, but it’s a good quality, solid chocolate tea. It’s steady and reassuring. This would be an every-day, take to work sort of tea for me.

i picked this one up in my first CS order because i wanted to try at least ONE flavoured from them that was on the bolder side, since steepster friends have let me try their lighter flavoured teas. This was actually much tastier than expected. Something about the way the puerh balances and plays with the chocolate, really just works for me. I’d be inclined to try steeping this one in milk as well some time to see how it fares. Just a deliciously darker chocolate sort of treat! YUM!

Cough This is one I’d be curious about trying Cough

My Camellia Sinensis package arrived! With a sweet handwritten note and a gift sample of Black Indian tea! :) We are so spoiled in Montreal with Davids Teas everywhere and Camellia Sinensis… Camellia’s teas are slightly more expensive but they are also better quality, and I’m rarely disappointed. Their teas are the only ones I can drink without milk and sugar.

So all five teas I ordered were blind-buys (well, expect for creme of Earl Grey), that’s how much I trust them haha!
And… I’m not disappointed! This tea is such a treat! I tried it both straight and with milk and sugar and it’s equally delicious. It’s heavier with milk but it makes me feel like I’m drinking a hot chocolatea, or teacolate? I wonder if they put flavours in this, but if they don’t it REALLY tastes like chocolate! Also, I don’t really get the pu’erh, though I’m not exactly sure what pu’erh is supposed to taste like…

I can’t wait to get my Chocolate Rocket from Davids to compare. I hope it’s really chocolatey. So! Another Davids package to come (probably on Monday) and I shall be ready for winter (as if…)