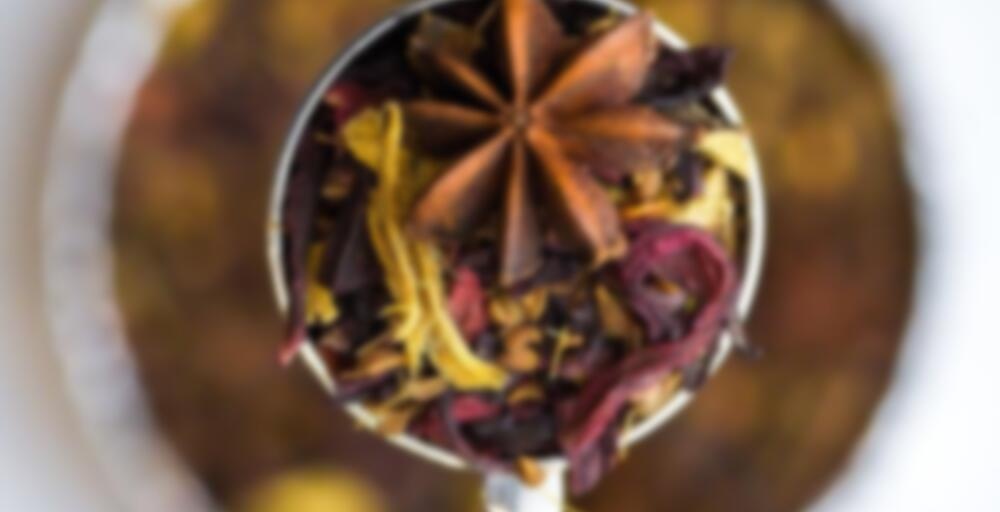 Award-winning, nostalgic aniseed, star anise & liquorice herbal tea blend. This blend won the highest food award in the country, and it’s also the nation’s favourite childhood sweet. Not just our opinion, it’s fact. There was a survey, questionnaire and everything.

This was in my box for this months tea club. I did say I’m not a fan of licorice and this contains it so in honesty I was not thrilled when I saw this tea. Then I decided to pick a tea at random to try and it was this one so I felt I might as well try it.

The loose blend smells very strongly of aniseed and licorice but the ingredients smell fresh which makes all the difference. I can honesty admit that I like the smell of this.

The tea is red in colour and it smells spicy like chili. Much different to it’s raw scent.

The tea itself tastes a little sweet at first with pure licorice and aniseed notes that are medium strength overall and in the after taste the chili flavour becomes stronger and gives a gentle tingle in the lips.

The scent of the tea is far stronger than the flavour and I believe that is why this tea works so well. It would make a nice addition to my winter tea cupboard as it’s very warming.

An impressive start to the tea club when I drink and enjoy ingredients that I don’t like. Well done. That being said this is not an ultimate love for me but I may get used to it over time and rate it higher.

I thought I’d take a risk on one and see if I could convert you… It’s always more fun that way (although sounds like with the Beet It as well, maybe a box full of conversion opportunities!).

This one is odd. I’m not convinced that I like it yet. :P
Also, I’m not keen on the pre-added stevia. I always prefer to add my own sweetener (or not!)

Today’s cold brew. It’s confirmed for me once and for all that I don’t like liquorice root. I know I said I didn’t mind Teapigs Liquorice and Peppermint last time I tried it, but I had a cold, guys. I couldn’t really taste it. I didn’t mind this one hot, interestingly enough — the hibiscus seemed to come out more that way. Cold, this is liquorice and stevia central. It’s all I can taste, and it’s lingering at the back of my throat in all its intensity.

It does taste a bit like Aniseed Balls. A lot, in fact, like the sweet sugar shell. I never thought I’d find myself wishing I could taste more hibiscus, but I do at the moment. It’s fruity tartness would at least go some way towards toning the sugar down here.

So — lesson learned. Aniseed Balls is not a good cold brew choice. I will ALWAYS drink this hot from now on.

Something from a weekish ago, that I just haven’t had the chance to write about yet…

This concept really speaks to me; I loooovvveee black licorice as a flavour as well as anise/fennel which are both pretty licorice-y as well. The only flavour in that ballpark that I really dislike is licorice root. Plus, Aniseed Balls are such an amazing candy! I buy these Orzo candies from a local supermarket that are really similar and I love them because they taste like licorice!

The smell of this tea!? Heavenly! It’s everything licorice/anise that I love – so sweet and rich, and aromatic. I feel like I can almost smell how sticky and lingering the sweetness is going to be. Black licorice has this epic molasses quality, and it just engulfs your entire mouth. It’s best when you get a tinge of bitterness to contrast that thick sweetness, too.

I’m sad to say the flavour isn’t as amazing as the smell. It’s certainly not bad and I still get a lot of rich anise and fennel notes, and the right amount of sweetness for the blend as well. There’s a tinge of a spice with more heat and that’s unexpected, but it isn’t the aspect of the flavour I’m finding unwelcome. What’s really tainting the cup for me is the strong tart notes from all the hibiscus that’s here. I suppose it contributes some body, and a rich liquor colour but when I think all of those deep, sweet licorice type flavour notes I do not associate tartness with them at all.

It’s a good tea – but it could be so much better without the use of that hibiscus.

Ugh, hibisicus! Ruins everything it touches.

I once encountered a first flush (!!) Darjeeling blended with hibiscus. I almost cried. Such a delicate tea battered and clubbed by that sharp redness.

I love hibiscus. And I love licorice (including licorice root). But if I wanted a strongly licorice-tasting tea, I would not want hibi in it. That is a stream that just shouldn’t be crossed in my brain, even as a fan of both (quite controversial) ingredients.

Yeah, it was definitely a weird and unexpected combination…

For what it’s worth, with the exception of licorice root, I actually like both licorice and hibiscus as flavours. My main issue is just when they get added to things that they shouldn’t be in; licorice is overused (in my opinion) as a “natural sweetener” in blends despite the fact it has a distinct flavour in addition to sweetness. Same thing for hibiscus, but for “natural colour” or to mimic the taste of (tart) berries…

It had been long enough since my first cup that I forgot the part about the hibiscus. Too lazy to to get up and make myself a different tea, I punished myself by drinking half the cup before dumping down the drain and storming to the garbage can with the rest of the dry mix, determined never to make the same fatal mistake a third time. Drama aside, what is with the obsession of tea blenders to over hib the hell out of stuff?!

I enjoy flavors like licorice root and anise so I was excited to try this blend. Opening the bag, I was impressed at the whole aniseed stars in the loose leaf. The dry leaf smelled exactly like a black licorice jellybean, intensely sweet and herbal. Unfortunately, brewed, the hibiscus in this blend takes over and ruins it for me. The red-berry, mulled-wine, flavors of the hibiscus are not what I’m looking for with an herbal licorice blend. I would have preferred this blend with a gentler base, like rooibos or paired with something like mint or lemongrass. I guess the hibiscus is more fitting with a “aniseed balls” holiday-like theme. Not bad, but not my favorite.

This tea was at the top of the list of teas that I wanted to try from Bluebird because I love Anise. And even though I don’t love hibiscus or stevia, I was willing to overlook the presence of these ingredients if I was about to try a tisane with licorice, aniseed and star anise … and chili!

I wish the hibiscus wasn’t there. That said, this is still an enjoyable tisane for me even though there is hibiscus and stevia. I’d like them not to be there, but I still enjoyed this even though they are there.

I love the licorice-y flavor to this. This is not for someone who doesn’t like the flavor of black licorice, but I love licorice so this tisane was right up my alley. The chili adds just a little warmth to it but doesn’t make it too spicy.