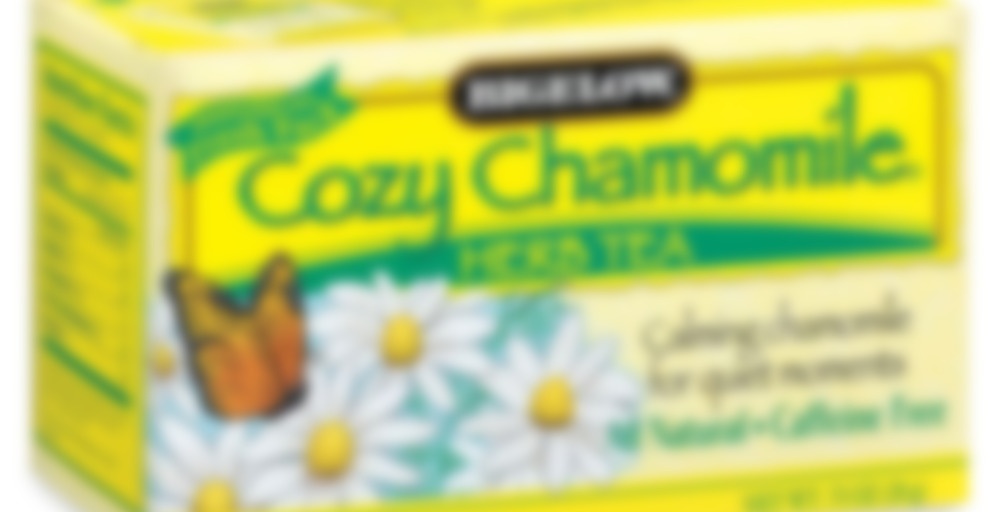 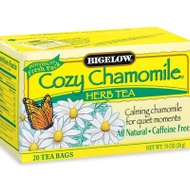 Chamomile is good for you, both soothing and relaxing. No better way to wind down. What makes Bigelow taste so special is that we use the whole chamomile flower, carefully picked so you get a much sweeter, rounder, flavorful experience… enjoy!

Okay, the rating is going way down. Seriously, because I can TASTE THE PAPER.

When did this happen? That’s it. I’m going to have to start pawning off all my bagged stuff to Jon. Let’s hope he doesn’t notice that I’m trying to get rid of the stuff!

Boiling 7 min, 0 sec
Yours I Like This
4 likes
7 comments
Edit

I’ve been furtively putting my boxes of bagged teas in the breakroom at work hoping people will just think it arrived their through normal routes.

LOL, Carolyn, I think someone’s been doing that here because seriously there are about 200 bags of random tea in our breakroom. The stash keeps growing (and it’s all random stuff I’ve never heard of).

Eep. Wrap a bow around it or something. That way it seems more gifty?

Not when it’s half gone! Hahahaha! LOVE Carolyn’s idea. I just might have to do that.

My secret method is to put only a box or two at a time in the breakroom and carefully monitor the situation. As boxes of tea disappear, I put new ones in. Meanwhile the giant bag of boxed tea I don’t like is in my file cabinet drawer (taking up much of it) waiting for their opportunity to join the other boxes in the breakroom.

Bwhaha, it looks like we’ve completed our corruption of you! ;)

I’ve recenlty realized that a lot of teas that tasted good when I was just starting to experiment with good-quality tea are not all that great now.

And yet there are a few ‘cheap’ teas I still love, like Twining’s Lady Grey and Celestial Seasonings holiday teas.

Backloggin’ it. Had this at a restaurant in Banff and it’s not bad. Chamomile is hard to outright screw up, so while it was an obvious chamomile, it didn’t have the brightness that chamomile should.

This will be my first experience with chamomile tea. I’ve never been very big on herbal teas. There’s no real tea in it! But here we go anyway.

At first blush, I thought the aroma was awful, like strong damp weeds. But I had my nose less than an inch from the cup, so maybe I was just smelling it too closely. I stood up and stared off into space while I waited for it to steep. I was breathing deeply and inhaling the tea without meaning to. Oddly enough, now it smelled good! I bent down and wafted the aroma towards me. But again, when I stuck my nose near the cup…phew! Stinky! So, who knows what that means.

The taste is similar to the aroma but stronger. When it’s actually on my tongue, it tastes great! Kind of like how the aroma is great when I’m standing over the steaming mug. But then I swallow and the aftertaste gets me. Blech! Strong, too strong. Icky. I can’t help but shake my head.

No no no. I don’t think I like chamomile. Or at least, this bagged version of it isn’t going to fly. It has potential, those little moments when I thought I liked it. But then it got squashed by yuck.

It’s really too bad. I’m so stressed out I can hardly function. I haven’t slept in 3 days. So, I thought the most recommended stress relieving bedtime tea would do the trick. Sadly, I think I’m going to have to rely on something else. I thought I could finish the cup, but I’m afraid this dirty floral tea is going down the drain.

that’s too bad you don’t like chamomile. I find tulsi is helpful for stress. Valerian will help you sleep but it is REALLY smelly…

Oh man, try a real chamomile sometime because this bagged version is nothing like the real thing

@Amy oh, I tried the valerian and it didn’t make any difference. :( But thanks for the tip, and the warning. Valerian IS incredibly smelly! Hahaha!

that’s too bad! I hope you find some relief soon…

Not a bad cup at all,especially when it is FREE…ahhhh….relaxing

It’s not bad really, but only because it’s so bland. I mean, yeah the flavor is chamomile, but rather weak and not very exciting (even for chamomile, which isn’t exactly a party anyway). So we’ll go with ‘meh’.

Sipdown! (108) Last night, I was hit with insomnia, so I took a nice, hot shower and tried to relax with this tea. Chamomile isn’t really my thing, but I know that it calms a lot of people and is included in a lot of bedtime teas, so I thought I’d give it a shot. I’m not sure if the insomnia gave up or if it was the tea or both, but I fell asleep pretty soon after, so yay!

I received this tea from Teaequalsbliss and I am backlogging from I want to say Tuesday. This is an excerpt from my tea journal:

After a long day of riding the bus it is finally time for me to settle down and do some homework in well earned quiet. :)

I was torn between two teas, this one and Mount of Olives’ Sweet Apple Spice. I chose the latter, but I guess it did not desire to bue consumed as the bag was rotting through and the staple rusted onto the paper. Poor packaging is often won’t to do so.

The moment I dropped the cozy chamomile into the hot water I was greeted by the oh-so-familiar scent of chamomile. Mmm. :) The packaging suggested sweeterner and although I am not the biggest fan of sweets, I do adore sweet beverages so I oblige with a sprinkle of sugar.

… and I forgot what chamomile tastaes like. The flavoring of this herbal has a nuttiness to it that I am not sure that I am fond of- kind of unpleasant, but I am not one to not finish a cup. Either way, the aroma is pleasant which I think is the majority of the experience of a chamomile anyway.

A review of Cozy Chamomile Tea by Bigelow

This is a tea I snagged from my in-laws tea box as I have been doing when around their kitchen after dinner. I saw that they have added some new tea to the tea box/chest. I decided some chamomile would be nice to have about now.
I take one tea bag and put this in my cup and add the tap water to my cup and placed this in the microwave for two minutes.

Tea’s aroma is of the lovely sweetly Chamomile; you can smell its smoothness and wanting to relax just with the aroma alone. I happily take my cup and inhale the scent a bit more and I feel an easing of the day’s events melting away. So I continue with sipping my tea slowly and contentedly until all gone.

The herb chamomile is known for its relaxing qualities and I can certainly attest to this as this was the lasting effect it had on me. My mind was set for tranquility and the tea accommodated nicely.

I went to the library on campus to study, I poked through the basket of tea bags for a decent tea and pulled out this. I like chamomile, it’s soothing!

Having a sleepless night for some reason so I dug around and found this in the back of my herbal drawer. I’M A PRETTY BIG FAN OF CHAMOMILE and I really wouldn’t say there’s anything wrong with this one! Just good ol’ standard bagged chamomile. I think the Trader Joes brand is bit better though, more flavorful or something.