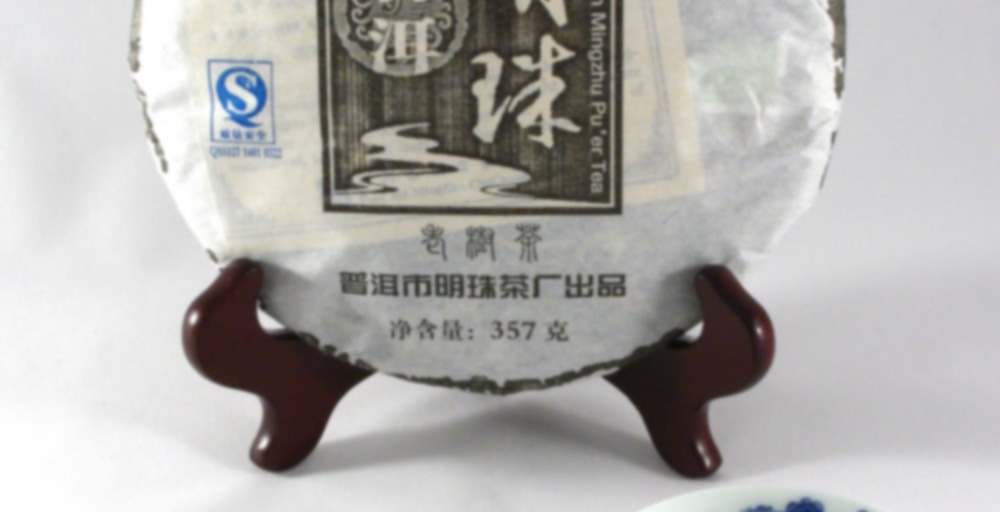 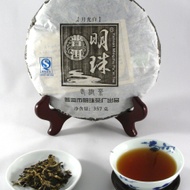 by Bana Tea Company
82
You

Taste characteristics: This tea is produced using a special technique wherein the leaves are dried at night, allowing a slight amount of oxidation. The result is a peach-yellow colored tea that exudes a mellow nectarine flavor. Full bodied, this tea has a nice smokiness that persists for many infusions. The aroma permeates the room as the tea is brewed and the taste is very pleasing and satisfying. Have a cup in the morning and afternoon to freshen up and de-stress.

These are really very nicely packaged. Each tea comes in a glassine envelope with a label and then they are stored together in a sheer organza bag. Also included are little brochures about the company and the tea. You know I will have fun drinking these! :)

I first picked this one to try. For a sheng of this age I was very surprised at how mellow it was. Steeped in the gaiwian – first infusion for two minutes and subsequent infusions for 30 seconds.

First infusion is very intense – leaves have a honey like aroma after being brewed. It is a sweet, mellow taste with hints of peach and a bit of maltiness. You get that pu-erh aged flavor on the back of your tongue.

Second and third infusions – the leaves are smelling a bit like a clean mountain lake. Fruitiness is giving way to a mineral like quality which tingles on the back of my tongue.

Fourth infusion – I believe I am picking up on the flavor that others have described as adzuki bean. A bit sweet and caramely.

Overall this has been a really great raw pu-erh experience with lots of flavors and tastes. I am getting a relaxing buzz from this. It is very sweet and soulful. I wonder how it will get different with age? Might have to consider picking up the entire cake but will wait until I try the others! Very yummmy.

I love it when tea is waiting for me at the post office!

From what I saw on here their tea looks nice. I have to check the website

This was another of the teas I tried in the 7-tea sampler set from Bana Tea Co. The three things that struck me about this tea were:

1) The name was lovely, and so poetic.
2) The leaves were similarly lovely and poetic. Very big, fluffy leaves with lots of silver buds laced throughout, like moonlight dancing through the trees.
3) The flavor of this tea tasted to me like a high mountain Ceylon tea, but smoother and sweeter..!!

I suppose the varietal of tea plant from which Ceylons come is related to the teas used in Yunnan for puerh, but this was a complete surprise to me. The flavor was sweet and malty. Reading over the description of how this tea was made, perhaps the oxidation of the raw tea explains the ceylon-esque qualities.

But for whatever reason, the tea was fruity, smooth, malty, and very unique! It highlights the way that puerhs can taste completely different.

The sampler would be great for someone who would like to taste the wide array of flavors and characteristics that are possible in the world of puerh teas.

Is there a way to get an English version of the website?

Hi there,
The entire site’s in English at: http://www.banateacompany.com/

This tea gave a very unexpected experience, as far as puerhs go.

The leaves are a nice teal-green with white flakes throughout. I detected a sweet malty peach aroma from the leaves and expected a typical sheng pu: peachy and a little harsh but pleasant; however there was none of that. Instead, after the first rinse, the aroma was malty and creamy like that of milk tea. I was totally blown away by how different this puerh tasted. The flavor was very complex from the first infusion: tastes of grains, honey, anise, beans, and licorice. A very savory tea with a lot for the tongue to ponder. The mouth-feel was very smooth and creamy, full-bodied and not a hint of dryness.

Even though the tea had some very good qualities, I have to say in the end I did not enjoy it very much. The red-tea, ceylon taste was just a bit too weird for me. Just not my ‘cup of tea,’ if you will. However, definitely worth a try.

I haven’t done a proper tasting in a while. Too hot, too stressed, too busy on the weekends.

I had rinsed this one weeks ago and never got to it — I let the leaves dry out and started over today with a rinse, then a 15 minute wait.

The description says this sample is a 2007 vintage.

I was a bit disappointed, but I don’t think it is the tea’s fault. I have a feeling my water may have been stale — I just used what had been sitting in the kettle.

The tea had a very dark, clear amber liquor which persisted through 10 steeps. It did not give off the usual strong buttery aroma of white chocolate. Instead, though that was present it was somewhat faint.

Instead I got something spicy. I identified it as cinnamon, but then I wondered whether that was because I’d had some Prince Vladimir before. I felt vindicated when I read that others also got cinnamon. I also identified a sort of mustiness which I attributed to my mistreatment of the tea and the possibility of not great water, like maybe I had boiled some algae, but then I read that others got that as well.

I also found espresso and toffee notes. But I missed the white chocolate, buttery, coco-ness I have found in other shengs.

The scent of the dry leaves in a warm gaiwan is just lovely, a mix of old books or old board game boxes mixed with petrichor and some tiny hints of apricot.

After a rinse, an intense plum fragrance exudes from the leaves, with a light vanilla note and still some of the aged books or old house kind of smell.

I tasted the rinse infusion. It smelled a bit of sweet dough and it had a slight dusty taste and a light overall flavor with a gentle sweetness. The flavor reminds me of the white stick you get in a Fun Dip candy. YUM! This is a rinse I enjoy drinking and will not be tossing out!

After the first infusion, the wet leaves have a more bright and sweet aroma like wet grass and soil during rain. The tea liquid smells like sweet dough with a hint of cinnamon, like cinnamon roll dough. The taste is complex, light, and sweet, with powdered sugar and subtle fruit qualities.

The second infusion has a deeper dried fruit flavor, is a bit less sweet, but is really mellow and rich. There’s a nice enjoyable quality to it. I taste faint notes of dandelion and burdock. If I swish the tea around in my mouth there’s even a bit of a wet fur taste that comes through.

The third infusion has just the most rich and delicious scent. I’m reminded again of sweet pastry dough with a hint of cinnamon, or perhaps horchata. As flavor goes, it is still rather light and mellow. I am having an interesting experiment tonight, as I just brewed a gaiwan of the loose Moonlight White from Jingmai (also from Bana Tea) a while ago. I purchased that tea on my own and this brick tea is a sample from a friend. I’m trying to decide which one I’d like to purchase on an upcoming order soon.

Having the two back-to-back is odd. They have similarities, but are very distinct. The loose tea is from 2012 and much younger. It has sweet and bright qualities, and a little more honey like sweetness. It almost tastes more like a white tea than a Puer. On the other hand, the brick tea is from 2007 and has a more complex nature with the aged earthy-musty notes blending with the sweet notes. The result is more a dulling down of the sweet tones than an enhancement of them, or perhaps this harvest itself is not as sweet as the one from Jingmai, as the cake tea is from a different source. The cake certainly has a mellower and perhaps weaker flavor, but the additional element of the aged taste creates more complexity and richness. Moonlight white is a tea you must brew more deeply than most other raw puer. It simply doesn’t give a bold flavor with very quick infusions unless you pack your gaiwan really full with it. I’m brewing 5g per 100ml right now and am having to add 10-15 seconds to each infusion. It has no bitterness or bite that you may expect from a raw Puer, even when young.

I’m on the fifth infusion of this tea, and I can tell that it would benefit from being brewed in a thicker gaiwan with higher heat retention, as the one I am using has very thin walls. I just didn’t want to bust out a larger one when drinking this tea alone. The flavor is subtle still, a bit unremarkable. I will raise the temperature for the next few.

These later infusions are mostly tasting of a light mustiness and a subtle fruit-like flavor.

I really love the aroma and flavor early on, but feel like it is tough to push much flavor out of it after the first few infusions, even if infusing it for a couple minutes or more. It’s definitely subtle. I’m curious how it will age, however.

I’ve had a chance to revisit this tea in my thick-walled larger gaiwan and I can say a few things now with certainty. Firstly, I prefer the loose version from Jingmai that Bana sells over this one quite a bit. At first, I think I was appreciating this tea a lot more because it was given to me by a friend and it’s of a varietal that I really like, but if I am to be totally as objective and unbiased as I can be, I feel this cake has a subdued flavor compared to the loose Moonlight White from Jingmai. I felt the cake was more complex at first, but I don’t feel that way now. It just had some more flavors I wasn’t used to, but those flavors have overridden and hidden some of the more subtle complexities that made me really fall in love with the loose version. This cake version, after a few sessions, hasn’t had the lasting appeal of that version. It’s a unique tea, but compared to other compressed raw Puer, I don’t feel it really competes for a place in my collection.