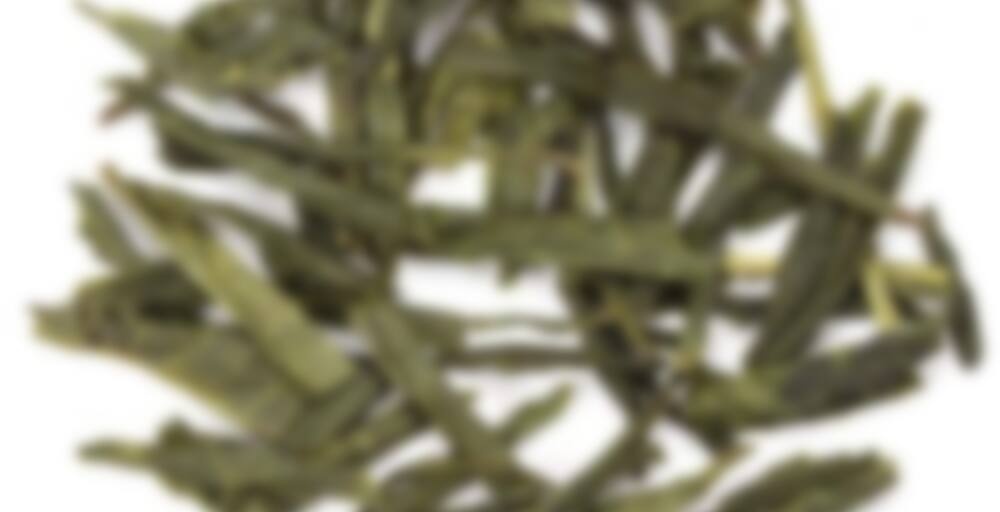 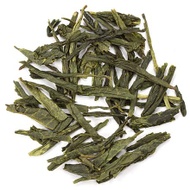 Green tea from China with the delicate flavors of cinnamon, cardamon, and ginger. Makes a light and refreshing drink that’s popular both hot and iced. If you are new to green tea, this lightly flavored tea may be a good place to start.

Wewt! Last bit of a sample tin! One day, there will be room in my tea cupboard once more!

I actually got a full container of this after ordering the sample (then was promptly inundated with samples and never finished the sample – until now) Somehow they got the balance of the spices such that the cardamon is actually dominating, and I believe I have stated before that I am pretty much a sucker for cardamon. There is a faint hint of cinnamon and the ginger is mostly present as an undertone and in the aftertaste. I really like the whole ‘chai, but lighter!" vibe it’s got going on. (I read somewhere today that no one actually uses the word “vibe,” is this true?) It makes for a tea that is not domineering and yet has substance. Very nice for the afternoon or evening.

I use the word vibe. But then, I’m prettty dated myself… On the other hand, I know a number of people who are easily 15-25 years younger than I am who say groovy and right on, and I hardly ever say those anymore. ;-)

I think people still use the word “vibe”— because I hear it all the time! Things like “There’s a cool vibe here” or “I’m getting a weird vibe from that person, I don’t know why.” Stuff like that. It’s a cool word—so feel free to keep on using it. But “groovy”? Now that’s dated! :)

and nifty is the clearly superior word, anyway. :D

Brought this to work again today, got a huge cup and steeped two bags GOLLY this is such a refreshing tea! Like, when you breathe in after you take a sip, your mouth literally feels cool and refreshed how neat is that!? NEATO.

Oh Adagio, I’m trying so hard to love some of your teas. I love your customer service, entire company agenda/philosophy, love that you offer people an ability to make their own blends. So I keep trying…

But this tea won’t win me over. It’s ok. Just ok. A lightly flavored “chai” green tea, the aftertaste is better than the sipping. If I double the leaves, maybe this would get better. Will try that at a later time, but for now this sample is going into the “try again later” box.

I really wanted to love things at Adagio, too, as they were really the company that fed my tea addiction when it was in the beginning stages. I did notice that some of their unflavored teas are really pretty good, though. I do like some of their chai blends, too. You are so right about their company as a whole!

When I’m ready to move on to unflavored in a big way (testing some here and there, but not the focus), I’ll go back and look for which you consider good. My limited “teaware” so far is theirs (which I love…IngenuiTea and UtiliTea). But maybe you are right about being the first. A friend recommended honeybush (in general) to me, so I found Stash’s Vanilla Honeybush (at store) and liked it a lot. Next was Google and bam, the Adagio journey began. Heck, who else sends you a “your package was just delivered” email?…when it was JUST delivered. I suspect little by little, I’ll feel the need to test everything they sell…lol.

I got this in my green tea sampler from Adagio ages ago, and had quite forgotten about it. This is a delightful little tea! Light and smooth, and lightly spiced. Normally these spices (cinnamon, cardamon & ginger) are not ones I would think go in a green tea, but it is quite good. I love it when tea from the tea shelf surprises me

Love Kashmiri (green based) chais. Although I have no clue why Adagio has both this and “green chai” or masala chai and oriental spice for that matter. Seems reduntant… I wish they’d stop wasting inventory space and come out w/ new stuff. Then again I don’t get Adagio a lot of the time.

I haven’t really gotten into chais, so that’s probably why the spice combination is new to me. Usually I think of those spices as ones that go with something sweet, and since I never sweeten my green tea, I was just surprised I liked the combination.

Yeah I add milk to my masala chais (but I also drink them clean), but I just can’t fathom putting milk in my Kashmiri chai (chais are the only teas I ever put milk in) even though that’s how it’s traditionally prepared. I also always skip the sweetener in all chai (all tea for that matter), even though it’s traditional.

This is a flat tasting spiced tea; something like when cinnamon candies go stale and loose their kick. I do not detect the ginger at all, and that’s highly unusually for me. As a flavor I’m not keen on, it tends to stand out to me even when used sparingly. Although this should be a plus for me, it’s not a plus for a tea that is supposed to have ginger in it according to its description. Not a winner, but as always, I’s still happy to have tried it. Thanks DianeInOz

Thanks again to Starberry for being wonderful and sending me so many teas to try!

DANG IT RILEY! My dog ran across the road to chase a squirrel (we live in at the end of a no outlit road so it’s okay) but when I turned around for a second, instead of coming back to the yard like usual, he went toward the block above ours. Going after him made me over steep this a bit, so we’ll see how this goes.

I’ve been enjoying all the teas I currently have so much I hadn’t dug into some of the other samples I had. I have been drinking so many oolongs, I was starting to forget what green tea was like. Now that I think about it, I don’t even know if I can RECALL what plain green tea tastes like. Not the greatest considering my profile says they’re one of my favorites… WELP, guess it’s time to confirm that.

You can definitely smell the cinnamon in this. It makes me think of Christmas season, putting up the christmas tree, or even my mom and dad’s annual Tom and Jerry party. I’m pretty excited to try this. COME ON TEA COOL DOWN….

The initial taste definitely brings out the green tea taste (ah yes, that’s what it tastes like). The aftertaste though really makes this taste great. The ginger, cardamon, and cinnamon kind of pop up from the back of your throat like “hey, we’re hear too” so instead of having green tea I feel like I just had some chai. IT’S REALLY GOOD!

I forgot I had a sample of this in my cupboard until yesterday morning and I have to say it MADE MY MORNING. I am not a big fan of SUPER spicy tea, but I think the green in this really cuts away some of the spiciness in this tea and leaves you with just a smooth green taste with an undertone of spice. Lovely.

ive never tried a “run of the mill” green tea before this is all i have to go off on. normally im not a green tea drinker, but i enjoy this. i think its the spices in it that make me like it because they do stand out to me. its a very light tea, i prefer mine stronger so maybe next time ill go for a longer steep time. i am enjoying this as i do my chemistry lab report (yuck)
the color is a pale greeny color that i find very pleasing to the eyes and the smell is wonderful, again i think it’s the spices. ive got to say this was a good purchase on my part. hopefully steepster can help me open up to more green teas :)

I expected this to be mediocre, to be honest. But I was pleasantly surprised by how tasty this was to drink. It was not spicey, I wouldn’t compare it to a full-blown chai by any means. But it was easy to drink, just spicey enough to entertain my tongue. This goes well with a little honey and lemon for colds too. Might become my “staple” green tea.

So yummy! The dry leaves smell decidedly like chai tea. Once steeped, the chai really stands out but I still get notes of citrus and ginger. It puts me in the holiday spirit! The only reason this isn’t getting the perfect score is because I like it even better with a bit of honey.