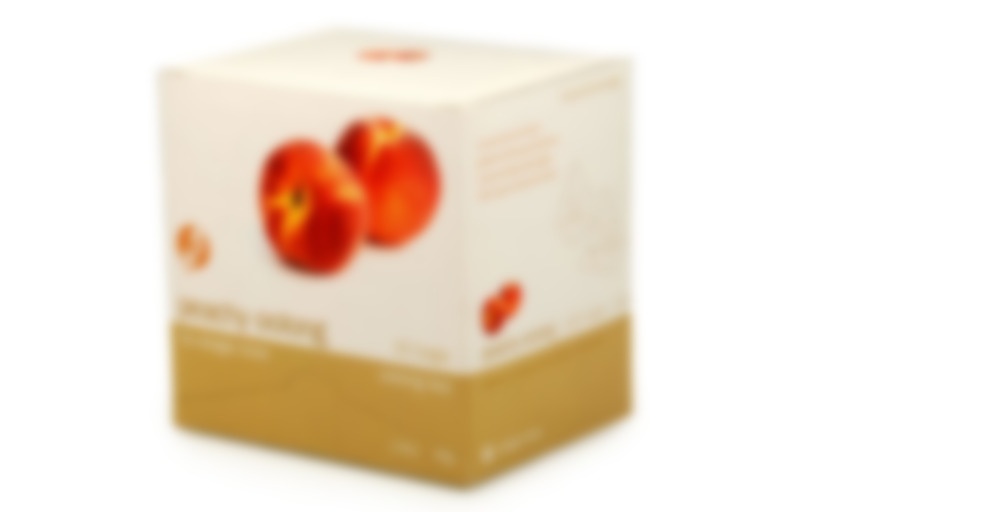 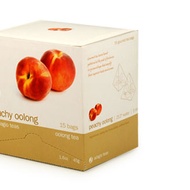 by Adagio Teas - Discontinued
80
You

Imagine being whisked away to an bright, fresh apricot orchard… That’s the sensation you’ll get with your first sip of our delectable Apricot tea. Combining the sweet flavour of ripe summer apricots with the delectable taste of Taiwanese oolong tea, you can experience it year-round. Full-leaf tea in portable, individually wrapped bags – superior taste and maximum convenience.

N.B. – description above refers several times to “Apricot”. But the tea is Peach.

Chuck Norris once swam to the Virgin Islands. Today they’re known as the Island.

Sooo i got 3 new teas today and 3 more got stuck on the customs office but should get them soonish. They don’t like it when a box doesn’t have an invoice in it ;) I even totally forgot about that purchase. Oh well expand my dear shelves, make more room…

OK so i kinda assume that these teabags should be similar to Peach Oolong tea by Adagio – but i still added this one as a new one. It’s teabags after all, and who knows maybe its not exactly same… They are totally sealed in the little packages. Mmmm it smells nice when i open it. Very peachy.

So let’s see…
Ohhh lot of tea in the teabag. I almost never steep that much tea. Maybe i should change my habits. Says i should steep it for 5 minutes. That’s also longer than i normally steep my oolongs (more like 3 minutes).

Guess what it smells like? Yep yep peachy. I must admit i’m getting all peachy here myself…

Tastes of course peachy but oolong is almost stronger. So it’s a good oolong with sweet peachy aftertaste. Can’t judge yet on quality of oolongs. But this is quite yummy. Somewhere in between ’i’d buy it again’ and ‘gimme more’. Shall see soon how it behaves on new steeps…

I messed up second steep, first water got too mild, then i forgot it’s steeping. Anyways i still think this is a one steep great tea. Its still ok and very much drinkable but it’s not as yummy…

oh crap. i happened to look up a 50k training plan so i can KINDA get in gear for my race in 2 weeks. and it says i should do 18 miles this weekend (10 saturday & 8 sunday).
the problem is that this weekend is my boyfriend’s birthday and i’m throwing a party. 18 miles is very unlikely to happen. no matter how focused i think i might be. hell, if i run ONE of the two days i’ll be happy.
oh well. i’ll do my best! :-/ but yes i’m nervous.

the directions on this teabag say 5 min steep with boiling water. i just can’t bring myself to do that. so i did 3 min with less than boiling water. and i think that is a good steep. any longer and it would probably start to turn dry.
the scent of this tea is very strong and super peachy. PEEEE-CHEEEE.
a great summer tea for sure. what’s not to like?!?! i’ll answer you. NOTHING.
everyone will like this tea. it’s simply that easy to enjoy.
thanks TastyBrew!

“We were pretty much scared out of our minds. I was straight out of college, and all of a sudden they were flying me out to New York to perform live on national tv – The Tomorrow Show with Tom Snyder. And I was wearing these horrible, crazy quilt velvet pants that a friend of mine had found at a thrift shop, and, you know, barefoot, frizzed-out hair. It was quite a look. Jon Schwartz is a serious talented drummer, and I had him on his knees poundin’ on my accordion case, blowing into duck calls, siren whistles. I mean, if you’re in my band you can’t have too much of a sense of dignity. (laughs)”
- “Weird Al” Yankovic, Biography interview

I love Weird Al. I had all his cassette tapes growing up. I still can’t get enough of yoda.

After getting addicted to Oolong thanks to a sample from Mike on Citrus Oolong, I wanted to dive into another oolong flavor & fast. I’m pretty sure I have other oolongs to try, but being in a rush this morning, I grabbed this teabag to try.

Every day at work around 2pmish, it’s tea time. I try to grab something that has a good flavor to cheer myself up. Hey, I’m at work…anything will work! And today, the winner is Peachy Oolong from my friends at Adagio.

This teabag (tea pyramid) came as part of the tea chest set I bought during the holidays. Still love the tea chest. It really holds a lot. I just haven’t gotten around to trying all the flavors yet. This makes the second out of six that I have tried.

First off, I love the smell of the tea in the wrapper. There is no doubt this has pieces of peaches in it. Per Adagio’s directions, I used boiling water & let it steep for 5 minutes. Now here is where I’m probably going to get banned from Steepster, I left the teabag in the cup. This might be wrong to some people, but I really love that deep dark flavor.

For the record, I’ll probably make another cup soon as the first cup is now done.

I love this tea! It was rather refreshing & delightful & delicious! I love the dark color I got from letting the teabag sit in the water. I like that the peach flavor doesn’t overpower the oolong tea. It compliments. It’s like they were meant to be together just for my amusement. Wow! That’s good! I should be a writer!

But seriously, I’m learning to appreciate the re-steeping value of oolong’s. And I’m definitely going to have more of this tea on hand once I run out.

Thank you Adagio! Once again, you impressed me with the flavor!

Have to add….the second cup sat a little too long & cooled down. So it was a bit lukewarm by the time I got to it. I grabbed a cup of ice & iced it….definitely makes a lovely iced tea. Almost like Peach Snapple iced tea.

This was quite lovely. Delicate, fresh, peachy, clean, sweet, juicy, and just the right amount of oolong to remind you that it is indeed tea you are drinking and not juice. Even my husband (“Mr. I don’t like tea”) looked in the tea pot curiously and asked if there was any left. He had a small cup with our dinner and said that it was “nice”. Definite point boost for this tea! :)

Thank you Jenny Wren for sending this one to me in the pay it forward tea swap!

I’m glad you liked it!

My first Oolong! (thanks to Starfevre)
The black Oolong base is intriguing — has an interesting, sort of earthy scent, and a nice mellow flavour — although still a wee bit bitter, as I typically find black tea to be. A pleasant cup of tea, but as usual, I would have liked more peachiness. I guess I really like a strong hit of fruit. (If it tasted like hot juice, I’d probably be okay with that. ;-)

Steeped in boiling water for 5 minutes, as instructed. Next time I make an Oolong, will try 4 minutes and see if that reduces bitterness.
Tried a repeat steeping (because I read somewhere that some people swear that it gets better with the 2nd or even 3rd steeping), but that resulted in even less of the peach scent/flavour, and perhaps a little more bitterness.

This tea’s got me interested to try more Oolong blends.

Boiling 5 min, 0 sec
Yours I Like This
0 likes
4 comments
Edit

Multiple steepings works sometimes on flavoured blends, but mostly they’re talking about ‘pure’ unflavoured tea when they say that.

Oh! Thanks, that’s very helpful.
And I guess they’re not talking about herbal blends either then, eh? I’ve occasionally tried multiple steepings with herbal teas, but I’ve just ended up with a watered-down version of what I had the first steeping. Now I can stop wasting my time.

Sometimes it works on herbal blends and sometimes it doesn’t. If you really love it, it might be worth trying, except maybe with less water than the first time. I haven’t had much luck with resteeping herbals though.

The peach flavor in here tastes and smells natural, which is a plus. They did a pretty good job on blending the flavors, nothing is too overpowering. I’m not usually a huge fruit-and-tea-mixed-together fan, but I could see myself making iced tea out of this in the Summertime.