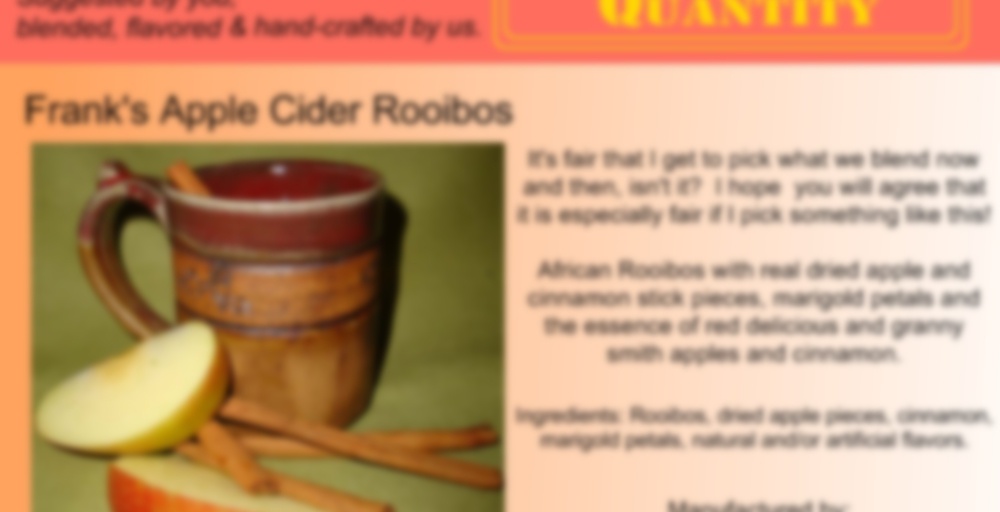 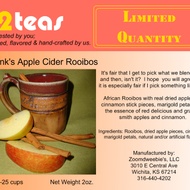 So I guess being the boss has its privileges. Yeah, I sort of short-cut in the line of suggestions forming on our forums to create a blend that I have been thinking about for a few weeks now. Hopefully our growing number of followers and subscribers won’t mind when they get a taste of this caffeine-free apple cinnamon bliss.

In my defense, I am waiting on a few items to be able to craft some of the tea blends folks have suggested, and I’m also trying to keep a good mix of things coming for our subscribers–not too many black teas or chais or chocolate teas in a row, that sort of thing.

Aw, who am I kidding? I just really wanted some apple cider rooibos. Hope you really want some too. I made four pounds of this blend, and 2+ are already spoken for by subscribers and my wife, who tried it tonight and threatened my life if I didn’t bring some home. So get yours while you can. This one is going to go FAST.

Another tea from the amazing Doulton. I’m not nuts about rooibos, but I’ve always been hunting for a tea that really nails the apple flavor. I love apples. But I’ve never found a tea that really tastes like apples. So if this delivers, I’m willing to put my rooibos prejudice aside.

The color of the steeped tea actually looks a lot like apple cider. It smells like cinnamon and apples (which is a good sign). Upon sipping, I get cinnamon and spices right away. I also taste the tobacco-esque rooibos right away – not cool. I’m not punched in the face with apple, which is what I was really looking for. The apple is there, but just barely. I’m kind of disappointed. I’d say that this tastes like plain cider, not apple cider. The aftertaste is also lacking any trace of apple.

I do so love apples.

P.S: After 10 months of pounding the pavement, I finally got a job! And as an added bonus, I get to be around books all day!

“but I’ve always been hunting for a tea that really nails the apple flavor” Some people claim chamomile is appley… I don’t get it though. Den’s Tea’s apple sencha is AMAZING… and Zoomdweebie’s has a green apple flavored green tea… if only that was caramel green apple!

Yes, I have been meaning to try an apple sencha, especially now that I’ve completed my little Den’s introduction to green tea course. I know that you’re not crazy about black tea, but Zoomdweebie’s has a caramel apple flavored black tea (and it’s in stock).

I think I’ll just blend the green apple and a caramel green:)

Erin, if a fruit tisane would work for you, try Turkish Apple by Upton tea. Definitely pure apple taste because that’s all that is in it. It’s not a tea, but it’s really yummy.

congrats! wow around books all day-awesome

Good point Morgana, then you can add it to any tea in any ratio you want:)

Congrats on your newfound job!! Lucky you, getting to be around books all the time!

Congratulations on the job! I know how difficult it is out there now… glad you found something that really appeals to you!

So happy for you and the book-filled job! ::does a happy dance for you::

Great finding a job that appeals and with books! Only other thing that would make it perfect is if you can find some time during the day to drink some tea! Congrats!

@Lauren – Check mark! The bookstore is conveniently located near a cafe whose employees frequently come in and give us free samples!

Seriously? No one has made a joke about Apple Jacks? (Hint: they do not really taste like apples) Also: Yay job! Yay books!

Erin – free cafe samples? Works for me! Hope it all goes well!

Looking back on what I said about this a month ago, the main difference is that I can now comment on “the rooibos aspect.”

Tonight, in fact, the rooibos aspect was the main thing I tasted in this tisane. It makes me wonder whether my novice palate at the time confused the rooibos with another flavor. Rooibos can have a fruity note to it, and I may have interpreted this note as apple. But now that I’ve had more rooibos, it’s not apple. And the lion tamer in me wants to reach for my whip and chair and back the rooibos back into its corner, where I like it best. Bumping down a couple of points.

Yes…. I just found this in the back of my cupboard yesterday…
and it’s ok. The apple flavor is about as week as normal since no teas are as apple-y as I want them but, the cinnamon is nice and strong.
So I’m liking this better than other apple/cinnamon teas on the sheer niceness of strong cinnamon.
other than that though… bleh