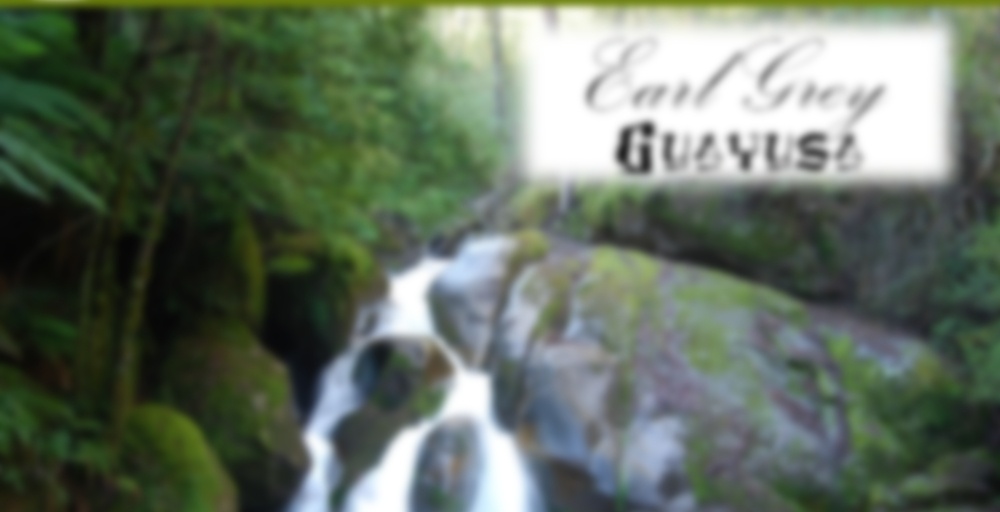 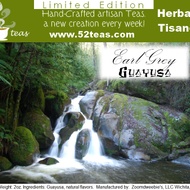 This is a very limited edition of our rain forest rocket fuel, Ecuadorian guayusa blended with natural bergamot flavors. If you haven’t had a chance to try guayusa yet, this is a GREAT opportunity you do NOT want to miss.

Guayusa is an herbal tea, related to yerba mate. Like mate, it is highly caffeinated, but guayusa has a very rich, bold, just slightly earthy flavor. It tastes like a VERY BOLD black tea, but with absolutely no astringency. It has a very smooth and round flavor (I’m not sure what round tastes like, but that’s how I would describe it; don’t take my word for it, try it yourself, you won’t be disappointed).

I had some of this earlier today, and the sharp citrus notes contrast nicely with the rich, mellow guayusa. It is really delicious.

Thanks again to QuiltGuppy for getting me a 3-week subscription… this is week 2!

This is a very interesting take on Earl Grey… the Guayusa brings out some of the sweeter notes of the bergamot, while allowing the tangy qualities to really come through nicely. An interesting contrast playing out on the palate.

@Kashyap: Guayusa is a tree from the Amazon. The leaves are are steeped similar to tea. The flavor is strong and smooth, no bitterness.

looking it up, it says it has nearly 2% by weight volume proportion of caffiene and is one of the most caffienated plants out there….wow….

Yes, but interestingly enough, it doesn’t affect me the way that coffee’s caffeine would. I felt all jittery and even nauseated when I would drink coffee. Not so with Guayusa.

I’ve never had a guayusa before. In fact I’ve only ever heard of it in passing. So I decided to research a little bit about it before making this tea.

I read a little about it one these sites:
http://www.runa.org/enjoyment/healthbenefits.aspx
http://en.wikipedia.org/wiki/Ilex_guayusa
And found that it’s one of three caffeinated holly trees known in the world, and that out of the three it has the highest amount of caffeine (for those like me who have never heard of this strange plant). I also found that it has more antioxidants than green tea, so it’s pretty good for you.

Anywho, on to the tea. I brewed it with boiling water for 4 minutes and it is now a very strange (and slightly unappealing) brown-ish green-ish color. It looks a little bit like dirty water (as in actual dirt in water). The dry leaf smelled like Earl Grey, but the wet leaf and the tea itself smells strangely like tortilla chips…. Like a lot like them. I surveyed the tea with the rest of my family and they agreed: there’s a definite tortilla chip smell. I added a little bit of sugar (half a teaspoon) because I was worried that it would taste like it would smell.

Surprisingly, it doesn’t. At all. In fact, it tastes a lot like traditional Earl Grey. It’s slightly sweeter with the citrus aspect (it may have helped that I added some sugar), and the guayusa tastes slightly earthy, which plays with the bergamont’s sweetness.

Pretty nice. I wouldn’t repurchase this if Frank does a reblend, but it is pretty nice.

Boiling 4 min, 0 sec
Yours I Like This
7 likes
1 comments
Edit