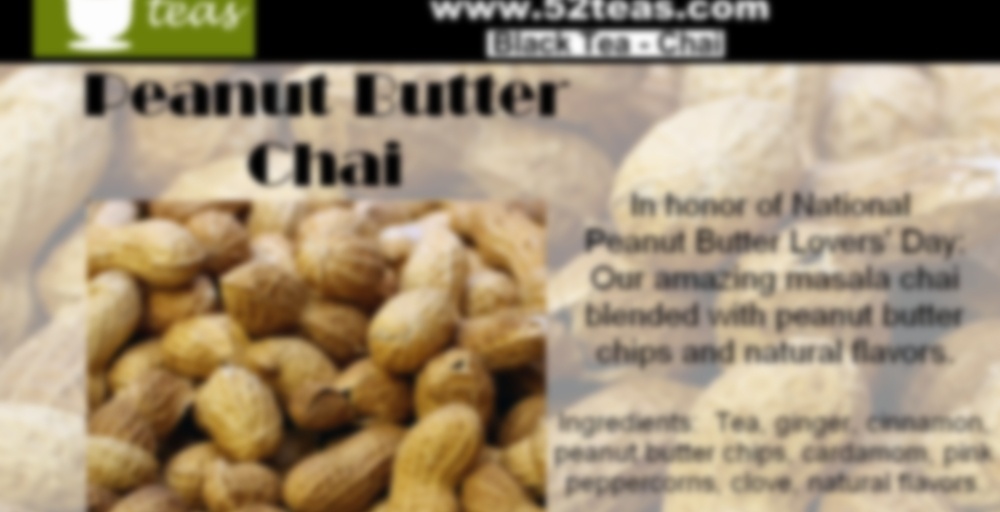 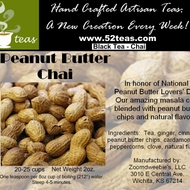 Why not celebrate with some Peanut Butter Chai?

Spicy—bordering on savory. At the forefront, I can taste the cinnamon, cardamon, cloves and plenty of pepper—but the peanut butter not as much. There’s an interesting nuttiness and something delicious and “Christmassy”—like gingerbread.

I love the intense spicy-sweet-savory aroma. And as this cools down, I’m detecting the saltiness of chunky peanut butter spread—yummy!

I wanted chai so I decided to prolong the life of my Mayan Chocolate Chai and drink this.

It smells like… pumpkin pie. Yeah I know weird. Especially since the raw leaf smells like peanut butter.

Frank, I can see potential w/ this. While I know it wouldn’t be as visually appealing, I suggest chopping the peanut butter chips to make it easier for the peanut butter, chai spices, and black tea base to be more evenly distributed.

I tried his PB chocolate tea and I had the same problem…Sometimes, the PB flavor was not evenly distributed throughout the tea- maybe the chips were too big.. and some portions had PB flavor and others didn’t…

And not all the chips melted even after 5 min. That’s a lot of wasted flavor.

You should try adding some mini-semisweet chocolate chips to it.

I only have enough to try it one more way and I want to try it w/ milk as I review all chais both ways. But I will be adding peanut butter chips to my Mayan Chocolate Chai some day… and caramel, and butterscotch:)

It was all I could do not to eat the peanut butter chips out of this blend. Oh, how I love peanut butter. It is my dear friend. And I love chai. How could I not love this? Well….

When brewed it smells deliciously nutty, but definitely tastes like a chai. The black tea in this is as prominent as the nuts, which is why I usually like my chais without black tea and just spices. Hmmm I am on the fence about how to rate this…. I am a chai fan, and I am a PB fan, but I’m having trouble getting super psyched about this. “It’s just a’ight for me.”

Edit- Added some vanilla almond milk, and a touch of Texas wildflower honey. Mmmmmmmm! Much better. Drew out the sweetness of the peanut butter.

Boiling 5 min, 0 sec
Yours I Like This
1 likes
3 comments
Edit

I wonder how this would taste with milk, sugar, and a little bit of peanut butter stirred in…ponders

I think I may have to try this. Well, at least milk and honey. I have neither sugar or (horror) PB in the house right now.

Okay, it’s much better with milk and honey, Mmmm..

Also perhaps a shorter steep time, and steeping one cup at a time might help with the peanut butter flavoring.

I need to give this one another try as it has promise.

Post-Steep Additives: German rock sugar
really the same, I should have perhaps also done a bit of milk

I had this friday night in a latte and it was delicious. Definately gonna have to add this to my collection if it doesn’t sell out first.

I’m really curious about this tea. Thanks for being the first reviewer! What did you like about it spoecifically? Is it very spicy and is the peanut butter flavor very pronounced?

you can definately taste the peanut butter but it is not too strong. Most of the teas at 52 teas have a GREAT flavor mix. The only one i have tried that i did not care for was the buttered cinnamon raison toast.