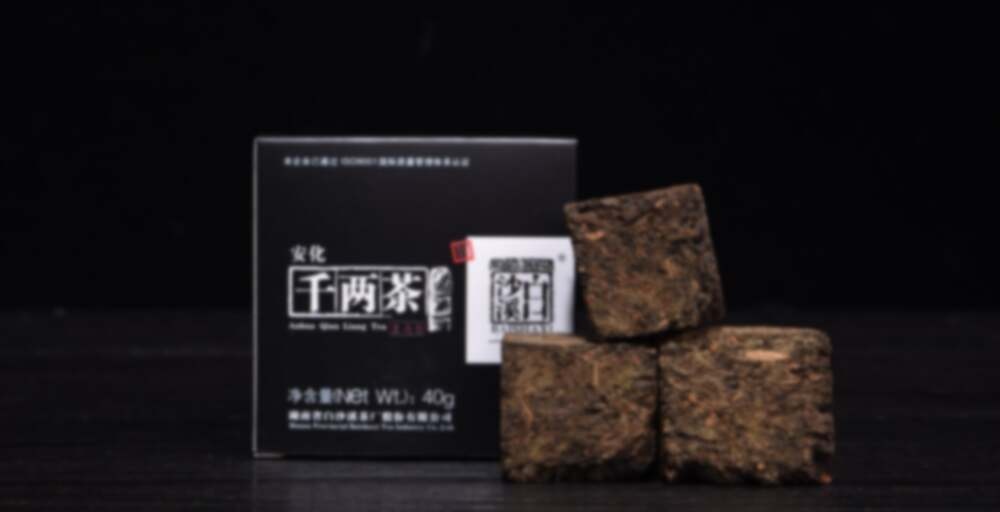 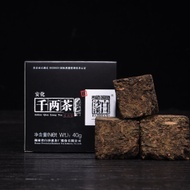 Bai Sha Xi production made from 2014 Spring tea leaves. Pressed into a huge 36 kilogram column called “Qian Liang Cha” (aka 1000 catty tea) and then aged for 4 years before being cut into small cubes that are roughly 10 grams each. The larger packaging contains eight small boxes of 40 grams each (for a total of 320 grams). Each 40 gram box contains a small paper bag that contains 40 grams of the 2014 Qian Liang tea. Typically each 40 gram box contains 3 cubes, but each cube can differ somewhat in size and weight.

Qian Liang tea is compressed in a long column (typically 36kg) through a laborious process that involves steaming the leaves and funneling them into a three layered cylinder of woven bamboo. Then a team of 5 to 8 people will simultaneously compress the tea using leverage and then tighten each section with thick bamboo stripling. Once firmly compressed the Qian Liang “logs” are dried in the sun and then finally cured for months in an indoor warehouse. In this form they can be aged for decades or even centuries without molding, only improving in taste, aroma and complexity with each passing year!

You can watch this video here to see just how amazing Qian Liang processing really is!

Another video shows how the Qian Liang log is opened and prepped for the cutting stage when it’s moved to the consumption stage.

The taste is spicy, sweet, thick, with hints of brewer’s yeast and mushrooms. Really kind of difficult to describe, so we would encourage you to purchase the lesser amount first to see if you like it.

Bai Sha Xi Tea Factory in Anhua County of Hunan is the earliest producer of “Dark Tea” (hei cha) in Hunan and the first to produce the Golden Flower bricks in China. Bai Sha Xi was established in 1940 to product Hei Cha bricks, then in 1953 they produced the first Fu Brick with Golden Flowers.

Because there is a possibility this may contain a small amount of golden flowers, AND the golden flowers are often inoculated using wheat flour we cannot guarantee this tea is safe for those with Celiac Disease or those that have severe gluten induced allergies **