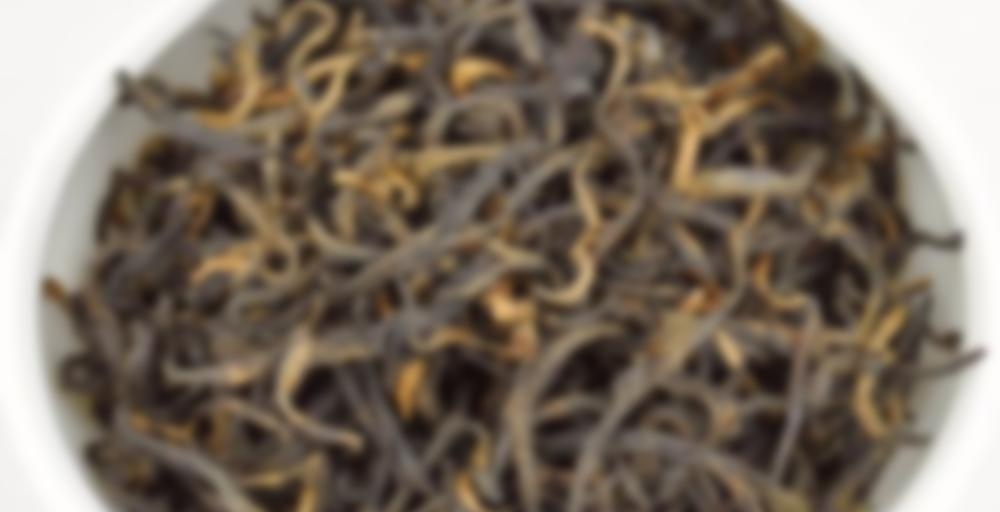 Jingmai Mountain area is a large area in the southern part of Lancang county of Simao Prefecture. There are more than 50 villages in the Jingmai mountain range, almost all are involved in tea cultivation and processing. Our Jingmai Wild Arbor tea is made from a naturally occurring Jingmai assamica varietal that is naturally hybridized and smaller in scale than pure assamica.

The tea brews up a chocolate and floral sweetness much like a Zheng Shan Xiao Zhong, but with it’s own unique character.

This was another recent sipdown of mine. I think I finished what I had of this tea either Friday evening or Saturday morning. I worked through most of what I had of it alongside the spring 2017 Jingmai Purple Needle black tea because I wanted to compare them to one another. Both were quality teas, but this more traditionally styled Jingmai Mountain black tea ended up being my favorite of the two.

Prior to the rinse, the dry tea leaves emitted aromas of baked bread, malt, chocolate, brown sugar, and sweet potato. After the rinse, I detected aromas of roasted almond, roasted peanut, cream, and butter alongside an even stronger chocolate scent. The first infusion introduced aromas of rose, orange zest, straw, and violet as well as a subtle scent of smoke. In the mouth, the tea liquor offered up notes of malt, cream, butter, baked bread, earth, and chocolate that gave way to impressions of rose, roasted peanut, sweet potato, brown sugar, and orange zest before impressions of wheat toast and some vague vegetal notes took over on the swallow. The subsequent infusions brought out aromas of pine, wheat toast, caramel, anise, cinnamon, marshmallow, menthol, and earth as well as some subtler scents of black pepper. Roasted almond, straw, and violet notes came out in the mouth along with stronger and more immediate impressions of wheat toast. I also detected cooked green bean hints and impressions of minerals, cinnamon, anise, menthol, caramel, red pear, pine, and lemon zest. There were even hints of leather, smoke, sour apricot, red grape, black pepper, and marshmallow lurking around the fringes. As the tea settled and faded, the liquor began to emphasize notes of minerals, lemon zest, orange zest, malt, earth, roasted peanut, and cream that were balanced by hints of pine, roasted almond, sweet potato, chocolate, and brown sugar. Some menthol coolness remained in the mouth and throat after each swallow.

This was a very nice Jingmai Mountain black tea. It expressed a ton of character on the nose and in the mouth, and unlike quite a few other Yunnan black teas, its energy wasn’t overwhelming. I could see this making a great tea for Yunnan black tea connoisseurs and neophytes alike since it had a ton to offer yet was never confusing, awkward, or overpowering.

To the cup: The aroma is of malt, tomato leaf, wheat, and a faint hint of cocoa/roast. The taste hits the classic more English style black cuppa notes. Pretty straightforward and classic. While it is nothing mind-blowing, it’s a decent cup. But I will not be ordering this one again.

The smell of this bizarrely reminds me of a berry tart, and the taste of the first infusion is pretty similar. I’m really enjoying it, because it has the kind of bready taste that I was hoping for, but also has that little extra sweetness, and gentle berry-ish flavor. My impression of the taste seems to be different than what others have pointed out, but I do really love it. It’s sweet, and a little bit complicated, and super yummy. I might write another review that’s a little more detailed , since it’s getting a bit late here, but basically I’m blown away by this tea, and really happy I got it.

I got a little sample of this tea from a friend recently. I think the 2015 version of this tea was one of the first loose leaf teas I ordered from anywhere besides Teavana. Even though I brewed this with 6g:100mL, I found the flavor to be a bit light. Not necessarily a bad thing, but I thought it was of note.

The flavor was sweet and malty from the beginning, but it also had a bit of a yammy note going. I enjoyed my session with this tea, but I didn’t find it particularly interesting or anything. A good and simple one to drink when you can’t focus too hard on your tea.

This has made it to the top of my “favorite black teas” list. I noted that the color of the tea was very dark golden/yellow, but the mouthfeel was “thin/light.” The aroma of the leaf reminded me of wheat and a bit of cocoa. As far as the flavor, this was a smooth, rich, & wheat-y tea; with a very subtle note of cocoa.